CHAPEL HILL, NC – For the first time, scientists have found that brain differences in the visual brain systems of infants who later are diagnosed with autism are associated with inherited genetic factors. 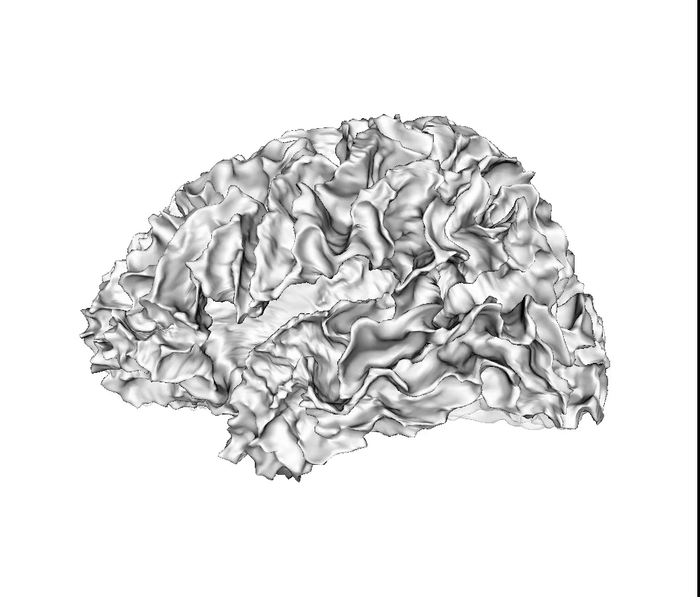 CHAPEL HILL, NC – For the first time, scientists have found that brain differences in the visual brain systems of infants who later are diagnosed with autism are associated with inherited genetic factors.

Published in the American Journal of Psychiatry, this research shows that brain changes in the size, white matter integrity and functional connectivity of the visual processing systems of six-month olds are evident well before they show symptoms of autism as toddlers. Moreover, the presence of brain changes in the visual system is associated with the severity of autism traits in their older siblings.

Led by Jessica Girault, PhD, assistant professor of psychiatry at the UNC School of Medicine, this is the first research to observe that infants with older siblings who have autism and who themselves later develop autism as toddlers, have specific biological differences in visual processing regions of the brain, and that these brain characteristics precede the appearance of autistic symptoms. The presence of those visual processing differences is related to how pronounced the autism traits are in the older siblings.

“We’re beginning to parse differences in infant brain development that might be related to genetic factors,” said Girault, who is also a member of the Carolina Institute of Developmental Disabilities (CIDD). “Using magnetic resonance imaging (MRI), we studied selected structures of brain, the functional relationship between key brain regions, and the microstructure of white matter connections between those brain regions. Findings from all three pointed us to the discovery of unique differences in the visual systems of infants who later developed autism.”

When parents and babies bond, when they lock eyes and experience their world together day after day, it’s not just cute; it’s how babies learn to interpret subtle cues about their environment. It’s the way babies learn to relate a caregiver’s behaviors to their own. This visual rhythm through the first years of life is crucial to cognitive, emotional, and social development. In babies who go on to develop autism, this research suggests that something goes awry in the brain’s visual system that impacts this visual interplay.

In recent years, IBIS Network researchers have used MRI to document brain differences in babies that later develop autism in the second year of life. In 2020, Girault’s research showed that younger infant siblings were much more likely to develop autism if their older autistic siblings had higher levels of autistic traits.

“This suggests that these autistic traits tell us something about the strength of genetic factors for autism within a family,” Girault said. “But we couldn’t say much more beyond that. This current study takes our work a step forward.”

For this study, the Infant Brain Imaging Study (IBIS) Network researchers recruited 384 pairs of siblings. The older child in each pair had already been diagnosed with autism, which put the infant sibling at a higher likelihood of developing autism. Then the researchers used various MRI approaches to study in detail the brains of the younger siblings at six, 12, and 24 months of age.

The researchers measured brain volume, area of the brain surface, in the region of the brain involved with vision (the occipital cortex) – structures that this research team had previously shown to be altered in babies who went on to develop autism as toddlers. They also examined the white matter microstructure of the splenium, a structure the researchers previously showed was related to how quickly infants orient to visual stimuli in their environments. At the same time, researchers documented the level of autistic traits in the older autistic siblings of those infants.

In six-month olds who went on to develop autism at 24 months of age, the researchers found that brain features involved with the structure of the visual system differed from infants who did not develop autism. Using this information, the research team then looked at networks throughout the brain and found significantly weaker functional connections between specific brain networks that linked to the visual system.

“It is particularly notable that we were able to demonstrate associations between brain findings in infants and the behavior of their older siblings with autism,” said co-senior author John R. Pruett, Jr., MD, PhD, professor of psychiatry at the Washington University School of Medicine. “The convergence of brain-wide, data-driven fcMRI results with the structural and diffusion findings strengthens our confidence in future replication of these discoveries, which could be tested in the new cohort of 250 high-familial likelihood infants we are presently recruiting.”

Co-senior author Joe Piven, MD, CIDD director, added, “We think aberrant visual circuitry is a fundamental cog in the cascade of events leading to later autism. We think this circuitry alters how infants experience the world, and how they experience the world alters how their brains subsequently develop. It’s this secondary altered brain development that may result in what we call autism that typically emerges in the latter part of the first and second years of life.”

More research is needed, but this study points in the direction of behavioral interventions aimed at the visual and related brain systems in the first year of life in infants at higher likelihood of developing autism based on inherited risk factors. Such interventions would aim to decrease the likelihood of children developing certain, more severe autism traits.

The authors are grateful to all the families and children who participated in the Infant Brain Imaging Study (IBIS) study. The IBIS Network is an NIH-funded Autism Center of Excellence project and consists of a consortium of nine universities in the United States and Canada.