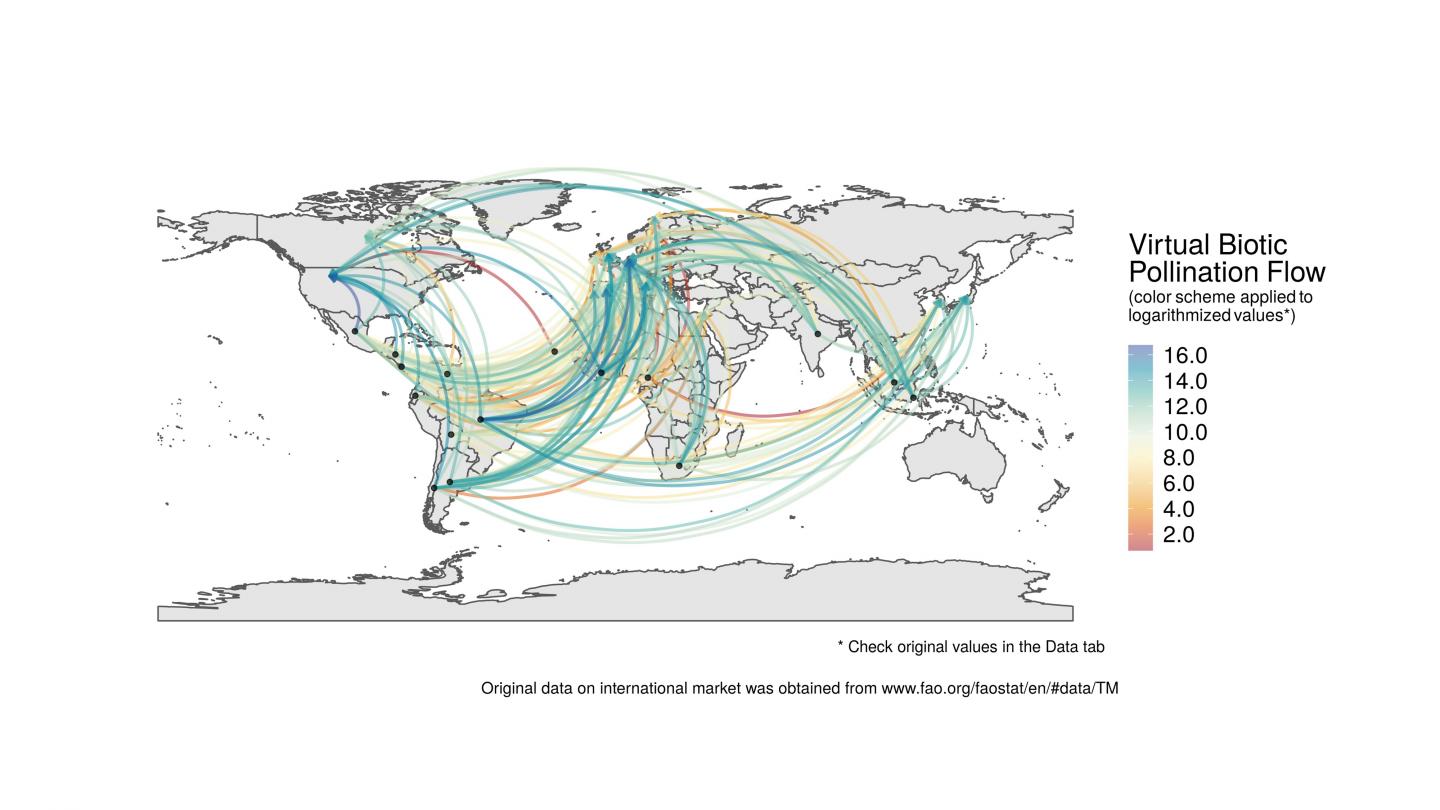 Recently, a published study in Science Advances assessed the contribution of pollinators to international market flows and showed that biodiversity conservation is essential to sustain global consumption patterns. This study results from the work of an interdisciplinary team that integrated researchers across the fields of economics, ecology, environmental sciences and social sciences.

Given the growing global demand for crops, sustainability in agriculture is one of the main challenges for human society. Together with the excessive use of chemical inputs, the loss of natural habitat associated with cropland expansion is one of the main drivers of biodiversity decline, and more specifically of pollinator decline. Since pollinators (especially insects) contribute to the production of the vast majority of crops, biodiversity loss negatively impacts crop yield. Quality of the crop product can also be affected, biotic pollination improving the nutritional content and aesthetic appearance associated with the crop market value).

Inspired by the concept of Virtual Water Flow, which measures the amount of water associated with crop products traded in international markets, the concept of Virtual Pollination Flow was defined in this paper as the proportion of exported products resulting from pollinator action. Felipe Deodato (Federal Instituto of Mato Grosso – IFMT, Brazil), who together with Luísa Carvalheiro (Federal University of Goiás – UFG, Brazil) led this research, said that “the concept of Virtual Pollination Flow shows how global markets, particularly those associated with more developed countries, are excessively demanding of pollination services from developing countries.” For example, Europe and the United States are heavy consumers of pollination services from Brazil via pollinator-dependent crops, such as coffee, soybeans, oranges, apples, watermelons, mangos, and avocados.

The study also showed that less-developed countries (i.e. those scored lower on the Human Development Index) are those that most expanded their cropland area dedicated to pollinator-dependent crops. This expansion was associated with loss of those pollinators’ natural habitat. Luísa Carvalheiro (UFG) warned that “yield loss associated with decreased ecosystem services, such as crop pollination, stimulates even more cropland expansion, thus creating a vicious circle with negative effects for both biodiversity and agriculture”.

The authors also pointed out the socioeconomic consequences of this trend. Small scale farmers, who are responsible for a significant portion of crop production worldwide, are those with less capacity to deal with crop yield losses.

Frédéric Mertens (University of Brasília – UnB, Brazil) emphasized that “the interdisciplinary approach of this research revealed the need to develop strategies of global collaborative governance that goes beyond economic principles of free markets, and instead aims for a synergy between international crop markets, biodiversity conservation and social justice”.

Although many previous studies reported pollinator declines and highlighted their important role in agriculture, the general public is still largely unaware of the impacts of the current agribusiness model and associated international markets on biodiversity. “When the consumers buy a package of coffee, they know where it came from just by looking at the label, but they don’t know if the farmer used sustainable practices to safeguard insects that pollinated coffee
production”, said Felipe Deodato. The researchers hope that, by facilitating the identification of global economic connections mediated by ecosystem services, the work will stimulate a recognition of shared responsibility, in which all participants in the production process (farmers, consumers and politicians) are engaged to minimize environmental impacts.

An online tool was developed for users visualize the flow of virtual pollination between countries
(https://virtual-pollination-trade.shinyapps.io/virtual-biotic-pollination-flow/).