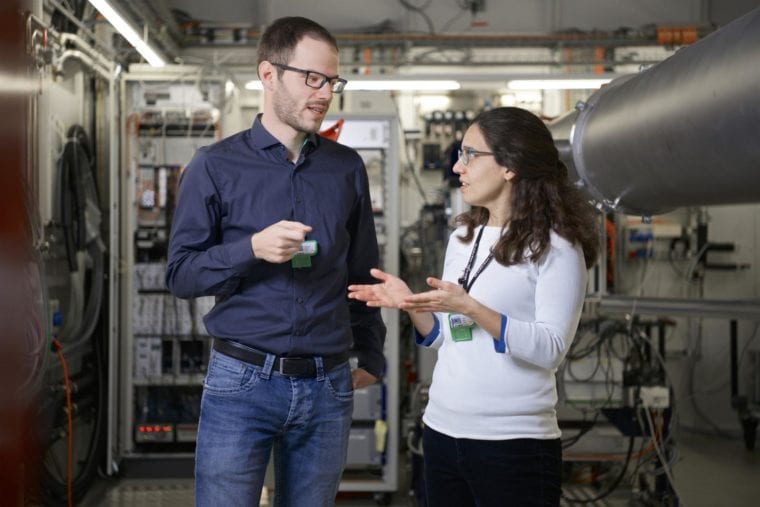 With X-ray microscopes, researchers at PSI look inside computer chips, catalysts, small pieces of bone, or brain tissue. The short wavelength of the X-rays makes details visible that are a million times smaller than a grain of sand – structures in the nanometer range (millionths of a millimeter). As in a normal microscope, a lens is used to gather the light scattered by the sample and forms an enlarged image on the camera. Tiny structures, however, scatter light at very large angles. To obtain high resolution in the image, a correspondingly large lens is needed. “It remains extremely challenging to produce such large lenses,” says PSI physicist Klaus Wakonig: “When working with visible light, there are lenses that can capture very large scattering angles. With X-rays, however, this is more complicated because of the weak interaction with the material of the lens. As a consequence, usually only very small angles can be captured, or the lenses are rather inefficient.”

The new method developed by Wakonig and his colleagues circumvents this problem. “The final image is as if we had measured with a large lens,” the researcher explains. The PSI team uses a small but efficient lens, such as is commonly applied in X-ray microscopy, and shifts it over an area that an ideal lens would cover. This virtually creates a large lens. “In practice, we go to different points with the lens and take a picture in each place,” Wakonig explains. “Then we use computer algorithms to combine all the pictures to generate one high-resolution image.”

From visible light to X-rays

Normally, researchers avoid moving lenses in instruments away from the optical axis, since this can cause image distortions. However, since the scientists in this case know the exact position of the lens and illuminate many nearby points, they can reconstruct how the light was scattered and what the sample looked like. The method, known as Fourier ptychography, has been used for microscopy in the visible region since 2013. In their experiments at PSI, the researchers were able to apply this principle to X-ray microscopy for the first time ever. “To the best of our knowledge no successful implementation of X-ray Fourier ptychography has been reported thus far,” the researchers write in Science Advances.

The new method delivers not only higher resolution, but also two complementary kinds of imaging information. Firstly, there is the measurement of how much light is absorbed by the object to be imaged, just as with any normal camera. Yet additionally, the way in which the light is refracted is recorded as well. Experts speak of absorption contrast and phase contrast. “Our method provides the phase contrast, which is otherwise hard to obtain, practically for free,” says Ana Diaz, beamline scientist at PSI: “This makes the quality of the images much better.” The phase contrast even makes it possible to draw conclusions about the material properties of the sample being examined, which usually is not possible with normal imaging techniques.

In their experiments, the sample the researchers examined was a detector chip. In the future, the new method could be used to reveal, for example, how a catalyst works when a gas is added, or when and how metal breaks under pressure.

But also tissues and cell aggregates could be investigated better with this method. The researchers hope this will yield new insights into the development of diseases such as Alzheimer’s or hepatitis. Diaz explains the advantages of the new method: “Biological samples normally do not have good absorption contrast. Here the phase contrast allows for a significantly improved image quality.” In addition, the researchers suspect that Fourier ptychography is gentler than previous methods. “A comparison with normal X-ray microscopy indicates that the new method requires a lower dose of radiation, because it is more efficient”, Wakonig says. “This could be particularly interesting for studies of biological samples.”

The researchers set up their demonstration equipment at the cSAXS beamline of the Swiss Light Source SLS. “At present, the experiments are still quite complex and require a lot of time,” Diaz says. For the new method to work, the employed X-rays need to be in a kind of unison: As researchers put it, they must be coherent. Such experiments currently require large-scale research facilities such as SLS. But Wakonig is also investigating whether the method could be realized with less coherence. If the technique could be used to examine samples at usual laboratory X-ray sources, many additional application areas would open up.

The Paul Scherrer Institute PSI develops, builds and operates large, complex research facilities and makes them available to the national and international research community. The institute’s own key research priorities are in the fields of matter and materials, energy and environment and human health. PSI is committed to the training of future generations. Therefore about one quarter of our staff are post-docs, post-graduates or apprentices. Altogether PSI employs 2100 people, thus being the largest research institute in Switzerland. The annual budget amounts to approximately CHF 390 million. PSI is part of the ETH Domain, with the other members being the two Swiss Federal Institutes of Technology, ETH Zurich and EPFL Lausanne, as well as Eawag (Swiss Federal Institute of Aquatic Science and Technology), Empa (Swiss Federal Laboratories for Materials Science and Technology) and WSL (Swiss Federal Institute for Forest, Snow and Landscape Research).

Much of the earth is still wild, but threatened by fragmentation

Overweight adolescents are as likely to develop heart disorders as…