The Boxwood Blight Insight Group (BBIG) was awarded a Partnership Award from the U.S. Department of Agriculture’s National Institute of Food and Agriculture in the Program Improvement through Global Engagement category. 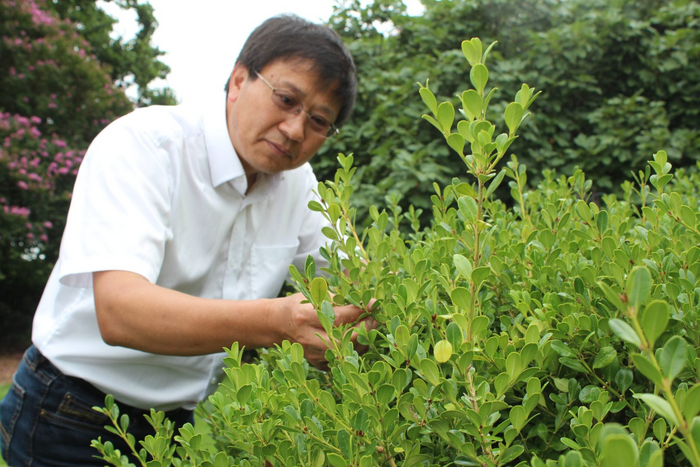 The Boxwood Blight Insight Group (BBIG) was awarded a Partnership Award from the U.S. Department of Agriculture’s National Institute of Food and Agriculture in the Program Improvement through Global Engagement category.

The group of researchers and collaborators from across the country, with partners around the world, was led by Chuan Hong, plant pathology professor in the Virginia Tech School of Plant and Environmental Sciences.

The group studied the emerging destructive disease of boxwood blight, which has destroyed entire crops and resulted in significant economic losses for garden centers and production facilities, as well as many historic boxwood plantings. Over the past three years, the scientists have collaborated with colleagues in Germany, Belgium, and the United Kingdom on the best ways to mitigate the spread of the boxwood blight.

Symptoms of blight include black, cloudy spots on leaves, which often get larger and cover the entire leaf, causing it to fall off of the plant.

“I am honored and excited, and my first reaction was to share the great new with the entire BBIG team,” Hong said, who is located at the Hampton Roads Agricultural Research and Extension Center.

According to the Department of Agriculture, the award is given to a program that “strengthens U.S. agriculture through effective international engagement in research, education and/or Extension.”

In an effort to study and look for ways to better contain and manage the disease, researchers took samples from three nurseries in Oregon, one of several states experiencing blight, noting it at two of the three nurseries. They found the cool, wet spring of 2022 led to new infections and outbreaks.

The researchers conducted experiments, looking at the impact of temperature on infection by two fungal pathogens, Calonectria pseudonaviculata (Cps) and C. henricotiae (Che).

They found the optimal temperature for Cps is dependent upon the substrate on which they are grown.  For potato dextrose agar, it is 25 degrees Celsius, while malt extract agar grows better at 15 to 20 degrees Celsius.

In the lab, the reaction of six boxwood cultivars were tested to see the reaction to Cps and Che at four temperatures.

They found that it is possible that temperature contributed to observed variable response.

After careful analysis, researchers found that SSG, a boxwood endophyte, induces various defense priming in boxwood plants, but it did not survive well on the foliage surface, suggesting its survival is critical to realize the full potential of the bacterial strain.

In addition, they found Bacillus methylotrophicus BP1024, a biocontrol agent, had the potential to control blight and promote growth.

Going forward, the group plans to test whether higher nitrogen levels contribute to increased susceptibility and if higher calcium levels will lead to a decrease.

To make the research done in Europe and elsewhere available for the U.S. horticulture industry and the public, the group conducted an International Boxwood Seminar Series, which was attended by people from the U.S. and 20 other countries on five continents.

They have presented their findings to more than 13,000 people at seminars in five countries, written more than 50 journal articles, and presented at nearly 200 Extension and outreach events.

Because of their research, the group has adapted mulching as a means for blight mitigation, identified effective and cost-effective fungicides and analyzed the spread of the disease in the U.S.

Findings have also caused growers to shift their production to less susceptible cultivars, which they believe will fast track the nation’s sustainability of boxwood production and gardening.

As a result, boxwood production has shifted to states less-affected by the disease, resulting in a 25 percent increase from 2016-21.

Boxwood blight was first discovered in the 1990s in the United Kingdom and New Zealand, spreading to continental Europe in the late 1990s and early 2000s and the U.S. in 2011.

Boxwoods have been featured in American landscapes since 1653 and is the nation’s leading evergreen ornamental shrub crop.