During the crisp and cool fall season, pumpkins are a hot commodity. The demand for this festive squash is on the rise thanks in part to their delicious taste and decorative traits. Pumpkin spice everything and pumpkins of all colors, shapes, and sizes greet consumers as soon as they enter the supermarket. 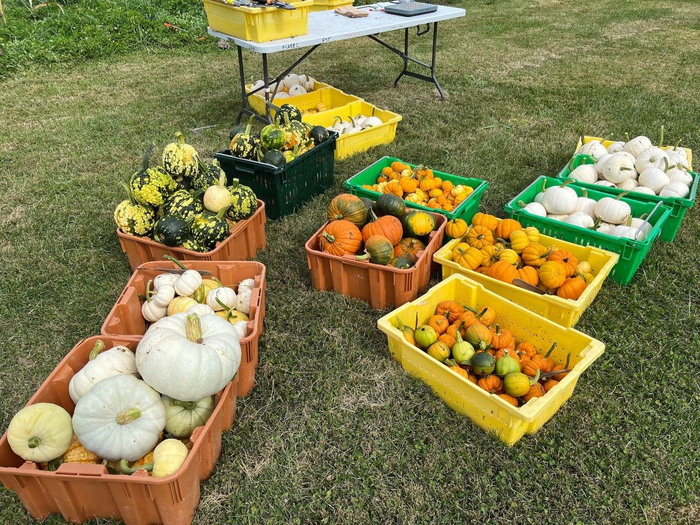 During the crisp and cool fall season, pumpkins are a hot commodity. The demand for this festive squash is on the rise thanks in part to their delicious taste and decorative traits. Pumpkin spice everything and pumpkins of all colors, shapes, and sizes greet consumers as soon as they enter the supermarket.

In response, Virginia growers produced an estimated 972,000 hundredweight — more than 108 million pounds — of pumpkins in 2020, ranking the state fourth nationally in pumpkin production, according to the Virginia Department of Agriculture and Consumer Services. The number of growers is also on the rise, doubling from 200 producers in 2018 to 400 in 2021.

This trend caught the attention of researchers in Virginia Tech’s College of Agriculture and Life Sciences, who are now using a grant from the U.S. Department of Agriculture (USDA) to help sustain this growth.

A team of faculty and Virginia Cooperative Extension agents received $75,000 from the USDA Specialty Crop Block Grant Program to test the growth of specialty pumpkins across Virginia’s diverse terrain as well as different methods to extend their shelf life by reducing postharvest diseases.

“Pumpkins are an important crop in the commonwealth with a value of $17.6 million produced on 5,500 acres in 2020,” said Steven Rideout, professor in the School of Plant and Environmental Sciences and principal investigator of the pumpkin grant. “To support this growing enterprise, we have been listening to growers and stakeholders across the state, and these are the most pressing issues with pumpkins they would like addressed.”

Sarah Sharpe, a Greene County Extension agent, has seen firsthand the explosion of specialty pumpkin sales. A co-investigator of the grant, she is the owner of Sarah’s Pumpkin Patch, located in the central Piedmont region of the state.

Sharpe is quickly winding down her 13th season of growing and selling specialty pumpkins, the kind people most visually recall as the colorful, wart-dotted, odd-shaped squash found jumping off the shelves of grocery stores and pages of lifestyle magazines.

“They are one of the reasons specialty pumpkins have become so popular,” she said. “People are using them to decorate all season long, well beyond Halloween and into Thanksgiving. The first two weeks that I was open, people rolled out with wagonloads. They sell out of here like crazy.”

Sharpe joins Extension agents from across the state, from the mountains to the beaches, who are either growing specialty pumpkins themselves or marketing them to growers. This effort is a key objective of the grant, spearheaded by Rideout, who specializes in plant pathology.

“The first part of this project is to look for different pumpkin and gourd varieties — types that people have bred for their desired traits — that are suited to production in Virginia,” he said.

Virginia is a perfect test bed for specialty pumpkins because of the state’s range of elevations and diverse soil and climate types, Rideout said.

About an hour northwest of Sharpe, commercial horticulture Extension agent Jason Cooper in the Shenandoah Valley is having success getting growers interested in testing these new varieties. Southwest Virginia Extension agent Ashley Edwards also is seeing an increased interest.

“I think this grant works out great because we are hitting almost every spot of the state, and each part of the state has a different growing season with about four or five different zones,” Cooper said. “Hitting all the different spots is beneficial as far as getting information and things that we need for our growers in our own personal coverage areas.”

From Halloween treats to Thanksgiving eats

While specialty pumpkins may be the new craze, the beloved orange jack-o’-lantern remains a holiday staple. What would Halloween be without a spooky carved pumpkinor a Thanksgiving table without pumpkin pie?

Pumpkins were historically targeted for distribution within October, but commercial markets, fall festivals, and consumer demand have shifted this retail window. Earlier sale dates in September have increased the need for pumpkins to have longer shelf lives to ensure fruit quality until Halloween. In addition, many consumers desire pumpkins to retain soundness for fall displays and decorations until Thanksgiving.

“These new trends have stretched the postharvest window for pumpkins, and growers are looking at options to increase fruit longevity,” Rideout said. “Unfortunately, little research has examined postharvest treatments to extend pumpkin fruit quality. Research exploring pumpkin cultivars that produce fruit possessing longer shelf lives has not been conducted either.”

That is, until now.

As part of the second objective of the pumpkin grant, the research team will compare postharvest qualities of these different cultivars over the 2023 and 2024 growing seasons. In addition to cultivar comparisons, trials comparing postharvest care of pumpkins will be conducted at Virginia Tech’s Homefield Farm.

Once harvested, the pumpkins will be separated and subjected to different treatments or none at all. Different methods include wiping them with water, wiping with bleach and chlorine, and spraying them with a hose.

“We understand that some of these practices may not be feasible for all growers, so their input in this project is going to be critically important,” Rideout said. “If you grow 70 acres of pumpkins, you know you’re not going to take each individual pumpkin and spray them off. There is some work to be done to exactly figure out this objective and what we can test, but our main goal is to explore what we can feasibly do that would extend their shelf life.”

The pumpkin grant funding will stretch over two years, but Rideout said the research team will support Virginia’s booming pumpkin production for years to come. The ultimate goal of any successful study is to share the results with growers and stakeholders, he said, and the team plans to do just that at field days, grower meetings, and through Extension publications.

“We are vested in this,” Rideout said. “We want to see pumpkin production do well and continue to grow.”