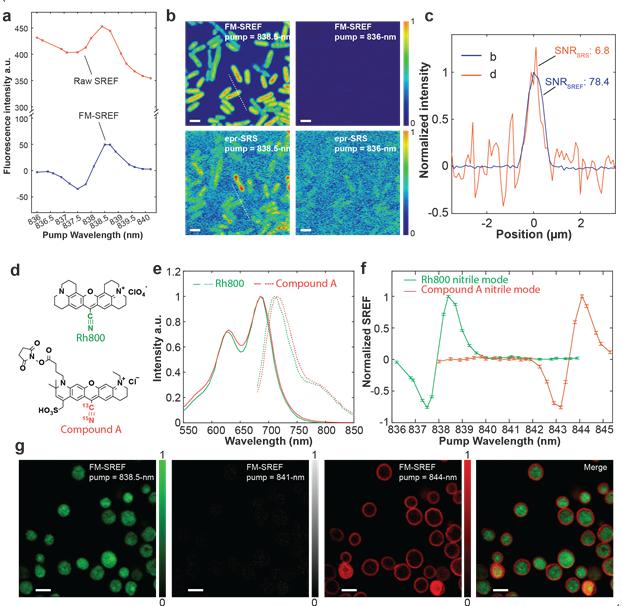 It has been a long pursuit to develop super-resolution imaging techniques for Raman microscopy, which has intrinsic advantages of chemical specificity over the fluorescence counterpart. Despite the perceived importance and extensive research efforts, true super-resolution (defined as diffraction-unlimited) Raman imaging of biological systems in the optical far-field remains challenging due to the deficiency in sensitivity for conventional Raman scattering. Consequently, those reported super-resolution vibrational imaging methods have to base on excitation saturating, depleting, or high-order nonlinearity of the Raman transitions. These require extremely intense laser power in order to achieve a moderate resolution improvement (often less than a factor of 2), which inhibits the utility for biological application.

In a new paper published in Light: Science & Application, a team of scientists, led by Professor Wei Min from Columbia University, USA, has developed a novel super-resolution vibrational microscopy harnessing Stimulated Raman Excited Fluorescence (SREF) as an ultrasensitive vibrational contrast. SREF couples the vibrational excitation with fluorescence detection and enables all-far-field Raman spectroscopy with sensitivity down to single-molecule. However, direct coupling of stimulated emission depletion (STED) with SREF imaging fails to achieve super-resolution imaging due to the presence of the anti-stokes fluorescence background, which cannot be depleted by the STED beam.

In this new work, the team devised a frequency-modulation (FM) strategy to remove this broadband background. By temporally modulating the excitation frequency on- and off- the targeted vibrational resonance but still within the background’s broad linewidth, they can generate an intensity modulation on the pure vibrational signal (but not on the background). The background-free vibrational signal can be subsequently demodulated by a lock-in detection. Comparing with the typical raw SREF spectrum, the spectrum acquired by FM-SREF represents the pure SREF signal, which enables high-contrast background-free SREF imaging. They further synthesized new isotope-edited SREF dyes to facilitate multicolor FM-SREF biological imaging with sharp vibrational contrast. Two vibrational colors are separated by FM-SREF with minimal cross-talk, which is nearly impossible by conventional fluorescence microscopy. Such chemical specificity of vibrational imaging has unique advantages for multiplexed optical imaging.

Finally, by integrating STED with background-free FM-SREF, they accomplished high-contrast super-resolution vibrational imaging with STED-FM-SREF, whose spatial resolution is only determined by the signal-to-noise. They demonstrated more than two times resolution improvement in biological systems with moderate laser excitation power. With future optimization on the instrumentation and imaging probes, STED-FM-SREF microscopy is envisioned to aid a wide variety of biological applications, with its superb resolution, high sensitivity, unique vibrational contrast, and biocompatible excitation power.