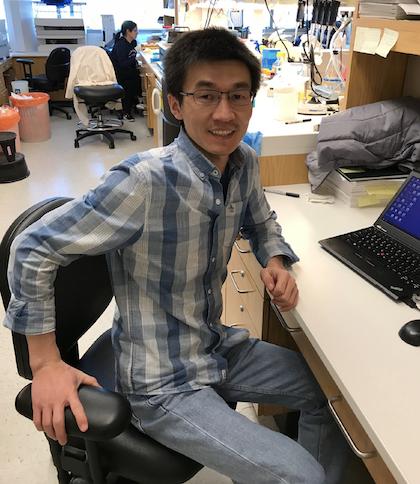 The proteins – the transcription factors SIX1 and SIX2 – activate cellular pathways required for fetal development and later switch to a new role in which they repress these pathways in adult immune system cells. The findings are published today in Nature.

“This work provides insight into the molecular components required to limit tissue damage associated with uncontrolled inflammation, such as in septic shock, and reveals how cancer cells may suppress the innate immune system during tumor genesis,” said Dr. Neal Alto, Professor of Microbiology at UT Southwestern and corresponding author of the study.

Transcription factors are proteins that bind to special regions of DNA to turn genes on (activate them) or off (repress them). “One of the surprising findings was that a transcription activator that is essential for the development of tissues and organs has been repurposed as a transcriptional repressor in the immune system. While transcription factors can be used differently in various stages of life, a switch from a transcriptional activator in the fetus to a suppressor in adult immune cells is infrequent,” said Dr. Alto, who holds the Lorraine Sulkin Schein Endowed Distinguished Professorship in Microbial Pathogenesis. Dr. Alto is also a UT Southwestern Presidential Scholar and a Rita C. and William P. Clements, Jr. Scholar in Medical Research.

He added that the work provides a new pathway for controlling inflammation, which could be important for developing new drugs. It also might explain how cancer cells develop chemotherapy resistance.

The researchers found that the two proteins showed inhibitory activities when bound to genes involved in inflammation. Specifically, SIX1 and SIX2 appeared to dampen the body’s immune response to prevent damage associated with a potentially life-threatening condition called a cytokine storm, which can occur in chronic inflammatory conditions. “A cytokine storm can occur when the body’s immune cells and activators (cytokines) show an overresponse to a health threat such as the flu,” he explained.

An experiment with transgenic mice found that expression of SIX1 in adulthood conferred near-complete recovery following exposure to a toxin released by gram-negative bacteria that can set off a cytokine storm. The two SIX proteins seem to dampen the response of the so-called noncanonical NF-κB pathway, a signaling cascade that is instrumental in the development of the lymph organs, the maturation of the immune system’s antibody-producing B cells, and the development of bone cells. The same pathway is involved in the body’s immune defense in adulthood.

In one series of experiments, the team found that cancer cells derived from patients with treatment-resistant non-small cell lung cancer expressed high levels of the SIX1 and SIX2 proteins. The scientists used the CRISPR-Cas9 gene-editing technology to remove the genes that produce those two proteins, making the cancer cells dramatically more sensitive to a promising drug class called SMAC mimetics.

“In summary, we have established that SIX family transcription factors function as immunological gatekeepers, regulating the activity of inflammatory genes in response to noncanonical NF-κB pathway activation,” he said. “These findings indicate that disruption of this pathway could have important consequences for the pathogenesis of human disease, including cancer.”

The research received support from the National Institutes of Health, The Welch Foundation, the Burroughs Wellcome Fund, the Howard Hughes Medical Institute, and the Simons Foundation.

Co-authors include lead author Dr. Zixu Liu, a postdoctoral researcher; graduate student Katrina Mar, former graduate student Dr. Sofya Perelman, and Dr. John Schoggins, Assistant Professor, all of Microbiology. Other co-authors include Dr. Natasha Hanners, an Instructor of Pediatrics; Mohammed Kanchwala of the Eugene McDermott Center for Human Growth and Development; and Dr. Chao Xing, Associate Professor in the McDermott Center and of Bioinformatics and Population and Data Sciences. Dr. Schoggins is a Nancy Cain and Jeffrey A. Marcus Scholar in Medical Research, in Honor of Dr. Bill S. Vowell.

UT Southwestern, one of the premier academic medical centers in the nation, integrates pioneering biomedical research with exceptional clinical care and education. The institution’s faculty has received six Nobel Prizes, and includes 22 members of the National Academy of Sciences, 17 members of the National Academy of Medicine, and 15 Howard Hughes Medical Institute Investigators. The full-time faculty of more than 2,500 is responsible for groundbreaking medical advances and is committed to translating science-driven research quickly to new clinical treatments. UT Southwestern physicians provide care in about 80 specialties to more than 105,000 hospitalized patients, nearly 370,000 emergency room cases, and oversee approximately 3 million outpatient visits a year.

New guidelines will improve treatment for patients with hyperthyroidism

Siri, help me quit — what does your smart device say when you ask for help with…

Living longer is important, but those years need to be healthy ones

Membrane madness: The ins and outs of moving materials through the cell

Scienmag May 15, 2019
Credit: Sandra Gabelli The cell membrane is a fatty layer that forms a border between the inside of the cell,…

Earth’s recovery from mass extinction could take millions of…