UT Southwestern researchers have identified a four-protein complex that appears to play a key role in generating ribosomes – organelles that serve as protein factories for cells – as well as a surprising part in neurodevelopmental disorders. These findings, published in Cell Reports, could lead to new ways to manipulate ribosome production, which could impact a variety of conditions that affect human health. 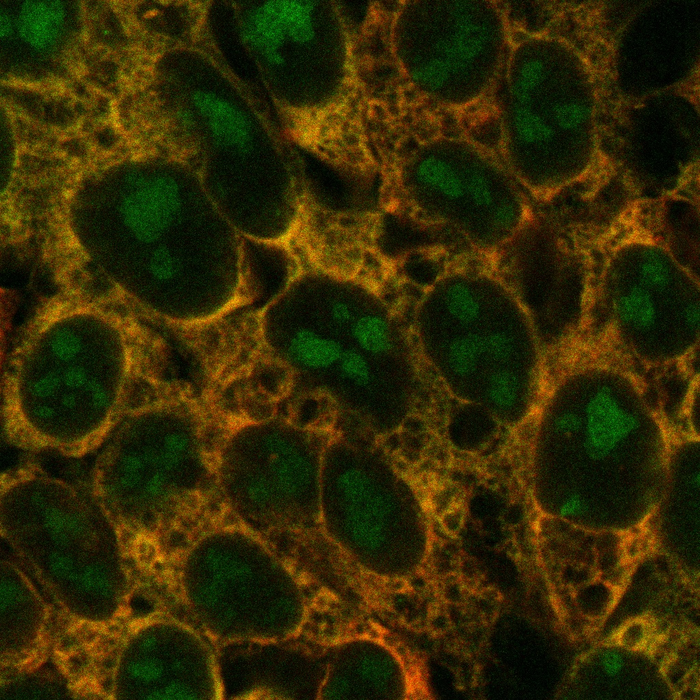 UT Southwestern researchers have identified a four-protein complex that appears to play a key role in generating ribosomes – organelles that serve as protein factories for cells – as well as a surprising part in neurodevelopmental disorders. These findings, published in Cell Reports, could lead to new ways to manipulate ribosome production, which could impact a variety of conditions that affect human health.

“Ribosomes are fundamental for life, but we’ve had an incomplete understanding of how they’re put together and how the process of ribosome production is regulated,” said lead author Michael Buszczak, Ph.D., Professor of Molecular Biology and member of the Harold C. Simmons Comprehensive Cancer Center at UT Southwestern. “Our findings shed significant light on these questions.”

Dr. Buszczak explained that ribosomes are present in varying amounts in every cell of every organism on Earth. Because of their key role as protein producers, he added, variations from these natural set points can have deleterious consequences. For example, cancer cells tend to increase ribosome production to boost protein production necessary for unchecked cell division. In addition, a group of rare diseases known as ribosomopathies – characterized by abnormal ribosome production – manifests with a variety of symptoms including anemia, craniofacial defects, and intellectual disability.

To learn more about this process, Dr. Buszczak, Chunyang Ni, a graduate student in the Buszczak lab, and their colleagues, including Jun Wu, Ph.D., Assistant Professor of Molecular Biology at UTSW, started by developing a technique that prompted old ribosomes to glow red and newly generated ribosomes to glow green. The researchers used this tool on several different human cell types, confirming different rates of ribosome production in each.

Using the gene editing tool called CRISPR, the researchers inactivated individual genes to identify those that might be key players in ribosome biogenesis. Their search turned up four genes known as CINP, SPATA5L1, C1orf109, and SPATA5. Further research showed that these genes come together into a complex that strips a placeholder protein from ribosomes when assembly is almost complete, allowing a different protein to take its place for ribosome maturation.

Previously, SPATA5’s function in cells had been unknown; however, mutations in this gene have been associated with neurodevelopmental disorders including microcephaly, hearing loss, epilepsy, and intellectual disability. When the researchers inserted two of these mutations into cells, causing them to create a mutant SPATA5 protein, the cells couldn’t generate the normal level of functional ribosomes – suggesting that these neurodevelopmental disorders could stem from ribosome problems.

Dr. Buszczak said that he and his colleagues plan to study why the central nervous system appears to be more sensitive than other cell types to ribosomal disruptions. He added that these findings could eventually lead to new treatments for cancer, ribosomopathies, and other conditions affected by over- or under-production of proteins.

This work was supported by grants from the National Institute of General Medical Sciences  (GM125812 and GM144043) and funding from the Simmons Cancer Center.

Other UTSW researchers who contributed to this study include Daniel A. Schmitz, Jeon Lee, and Krzysztof Pawłowski.

UT Southwestern, one of the nation’s premier academic medical centers, integrates pioneering biomedical research with exceptional clinical care and education. The institution’s faculty has received six Nobel Prizes, and includes 25 members of the National Academy of Sciences, 17 members of the National Academy of Medicine, and 14 Howard Hughes Medical Institute Investigators. The full-time faculty of more than 2,800 is responsible for groundbreaking medical advances and is committed to translating science-driven research quickly to new clinical treatments. UT Southwestern physicians provide care in more than 80 specialties to more than 117,000 hospitalized patients, more than 360,000 emergency room cases, and oversee nearly 3 million outpatient visits a year.