Combining two agents to block a parasitic worm’s life cycle boosted survival from a potentially deadly tropical disease to 85% in animal models, far better than either treatment alone, according to a proof-of-concept study led by UT Southwestern Medical Center pharmacologists. 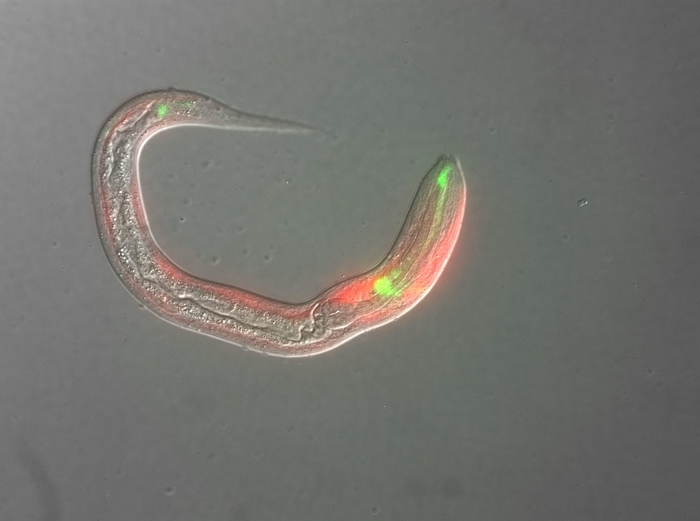 Credit: Ariel Juno from the laboratory of James Lok, University of Pennsylvania

Combining two agents to block a parasitic worm’s life cycle boosted survival from a potentially deadly tropical disease to 85% in animal models, far better than either treatment alone, according to a proof-of-concept study led by UT Southwestern Medical Center pharmacologists.

The Strongyloides infestation – brought by tiny worms known as nematodes that can enter through your feet – can cause strongyloidiasis, a chronic infection found in some 600 million worldwide. While mostly found in tropical and subtropical regions, the parasite has recently been identified in Texas, Alabama, and the Appalachian Mountains region in the eastern and northeastern U.S. and caused reported deaths in 36 of 50 states over the years. Mortality from complications with hyperinfection is up to 87% of reported cases, according to a 2020 modeling study.

“Parasitic nematodes that infect humans, animals, and plants are an enormous health and economic burden on society. We think the pathway we discovered could serve as a universal target for all parasitic nematode species,” said Howard Hughes Medical Center Investigator David Mangelsdorf, Ph.D., Chair of Pharmacology at UT Southwestern.  “This strategy could potentially offer a cure for the millions of people around the world who have strongyloidiasis – the disease caused by Strongyloides stercoralis – and points to a new way to fight many other parasitic nematode diseases.”

The two run the joint Mangelsdorf/Kliewer lab at UT Southwestern studying signal transduction pathways that offer new therapeutic potential for treating diseases such as diabetes, obesity, cancer, and parasitism. The Mangelsdorf/Kliewer lab discovered the existence of a nuclear receptor pathway in parasitic nematodes and has shown that pharmacophores that target this pathway may represent a new class of anthelmintic agents.

In this study published online in eLife, researchers targeted Strongyloides stercoralis, which can lead to a severe and potentially deadly hyperinfection syndrome for people who are immunocompromised, such as those taking glucocorticoids, a common steroid used to treat other medical conditions.

“Glucocorticoids were one of the first treatments used for severe COVID-19. WHO raised the concern that using steroids in countries where S. stercoralis is prevalent could set off a fatal hyperinfection in patients with chronic, subclinical strongyloidiasis. That possibility has elevated the urgency for finding new ways to treat the disease,” said Dr. Mangelsdorf, one of 25 members of the National Academy of Sciences at UT Southwestern.

Drs. Mangelsdorf, Kliewer and colleagues looked for vulnerabilities in the larval stage of S. stercoralis’ life cycle. By purifying extracts of S. stercoralis, the team discovered that the parasite synthesizes the hormone dafachronic acid, which acts by binding to a receptor called DAF-12. Further research identified the enzymatic pathway that S. stercoralis uses to generate the hormone and showed that the DAF-12 receptor acts as an on-off switch controlling larval development based on the availability of dafachronic acid. Importantly, when the hormone is present at the wrong time, the parasite is unable to develop into the infectious form and dies.

Pure dafachronic acid in its present form may be unsuitable for treating humans because of its short half-life in the body, said Dr. Kliewer, also a member of the National Academy of Sciences. However, if chemistry techniques can be used to alter its structure, it could lead to a useful drug. Because all parasitic nematodes have a similar stage in their life cycles, he added, targeting this hormone and other points along the dafachronic acid pathway could eventually be used to treat diseases caused by other parasitic worms.

Work was funded by grants from the National Institutes of Health (AI105856, GM141088, and AI050886), The Welch Foundation (I-1275, I-1558, and I-2010-20190330), UT Southwestern Eugene McDermott Scholarship, and the Howard Hughes Medical Institute. Researchers Zhu Wang, Mi Cheong Cheong, Jet Tsien, Heping Deng, and Tian Qin at UT Southwestern also contributed to the study, along with researchers from the Millersville University of Pennsylvania and the University of Pennsylvania, Philadelphia.

UT Southwestern, one of the nation’s premier academic medical centers, integrates pioneering biomedical research with exceptional clinical care and education. The institution’s faculty has received six Nobel Prizes, and includes 25 members of the National Academy of Sciences, 16 members of the National Academy of Medicine, and 14 Howard Hughes Medical Institute Investigators. The full-time faculty of more than 2,800 is responsible for groundbreaking medical advances and is committed to translating science-driven research quickly to new clinical treatments. UT Southwestern physicians provide care in about 80 specialties to more than 117,000 hospitalized patients, more than 360,000 emergency room cases, and oversee nearly 3 million outpatient visits a year.