UTEP wins prestigious award for ‘Thank You for 30’ campaign 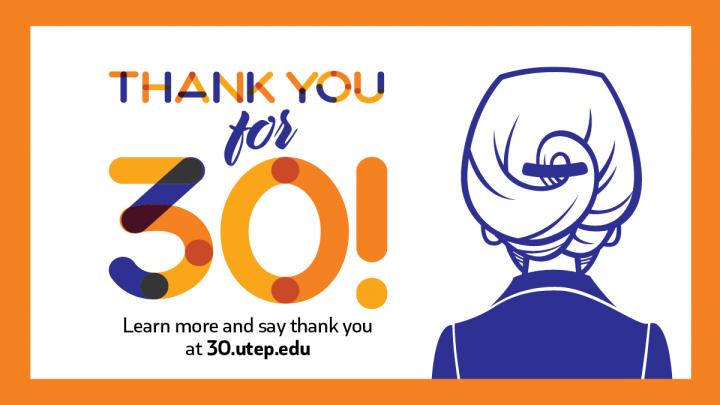 The Council for Advancement and Support of Education (CASE), a global association for professionals in educational advancement, awarded The University of Texas at El Paso a gold-level Circle of Excellence Award for the campus’ “Thank You for 30” campaign case statement.

UTEP’s fundraising division, Asset Management and Development (AMD), launched the campaign in November 2018, several months after University President Diana Natalicio announced her plans to retire after more than 30 years at the helm.

The goal of the “Thank You for 30” campaign was to celebrate the tenure of UTEP’s longest-serving President and to give alumni, friends, faculty and staff the opportunity to express their appreciation for President Natalicio and her commitment to access and excellence at the University. Financial contributions from the campaign will allow UTEP to sustain and enhance its efforts to promote student success through scholarships and programs.

As a catalyst for advancing education worldwide, CASE inspires its communities of professionals in the fields of alumni relations, communications, development, marketing and general advancement services to act effectively and with integrity to champion the success of their institutions. Each year, their Circle of Excellence Awards recognize the industry’s most innovative, inspiring and creative ideas in institutional advancement. The gold-level award acknowledges superior and impactful accomplishments that demonstrate the highest level of professionalism and deliver exceptional results.

“The gold-level award from CASE is a particularly special award for UTEP,” said Ben Gonzalez, vice president for asset management and development. “It punctuates not only our fundraising efforts for the campaign but also the close-knit and dedicated qualities of this UTEP community. So many of us have thrived under Dr. Natalicio’s leadership, and I think the result of this campaign speaks volumes to her success as UTEP’s President.”

In their submission, AMD staff explained that President Natalicio’s tireless efforts to enhance academic and experiential offerings on campus has resulted in steady and record-setting enrollment growth, an increase in doctoral programs offered and an exponential increase in research expenditures. They linked these accomplishments to UTEP’s recent Carnegie R1 designation and attributed the bulk of UTEP alumni, fully two-thirds of them, to having graduated during President Natalicio’s 30-year tenure.

The campaign, which will conclude July 31, 2019, has generated over 13,000 gifts from more than 10,000 alumni and friends to support student success at UTEP. In addition, gifts from faculty and staff, along with those from first-time donors, have increased sharply.

CASE’s volunteer judges, who are experts in their fields inside and outside of educational advancement, called the campaign an “innovative, exciting and engaging” way to celebrate President Natalicio’s remarkable leadership. Judges based their selections on overall quality, innovation, use of resources and the effect on the institution and related communities such as alumni, students, faculty and staff.

“The awards committee agreed that this campaign provided a framework for other institutions to work from and sets the standard for celebrations of presidential leadership,” according to the CASE announcement. “UTEP should be commended for their efforts and success with this initiative.”

CASE reported that more than 600 member institutions from 20 countries throughout the world submitted almost 3,000 nominations in 100 categories that are part of the Circle of Excellence Award. The UTEP campaign was one of seven winners in the category of Fundraising Programs – Principal or Major Giving Programs.

“In addition to celebrating the best work in educational advancement, the Circle of Excellence helps inspire others by showcasing creative and innovative work,” said Sue Cunningham, CASE president and CEO, in a congratulatory email to UTEP. “Your award-winning work contributes, therefore, to the betterment of the educational advancement profession worldwide.”