EL PASO, Texas (June 16, 2022) — The University of Texas at El Paso’s Diana Natalicio Institute for Hispanic Student Success has named Anne-Marie Núñez, Ph.D., as its new executive director and Jacob Fraire as the institute’s director of policy and strategy. 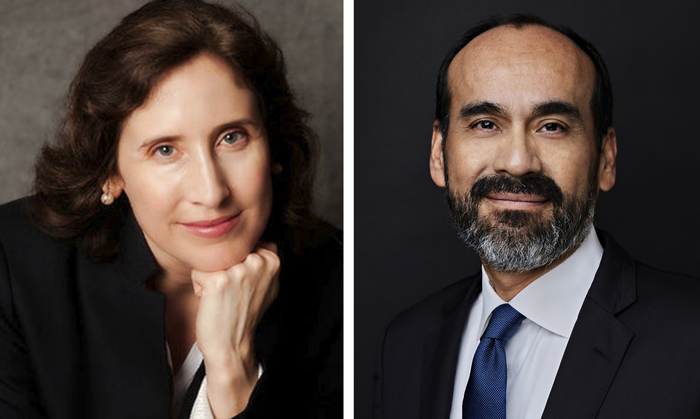 EL PASO, Texas (June 16, 2022) — The University of Texas at El Paso’s Diana Natalicio Institute for Hispanic Student Success has named Anne-Marie Núñez, Ph.D., as its new executive director and Jacob Fraire as the institute’s director of policy and strategy.

The institute, named after UTEP President Emerita Diana Natalicio to honor her legacy of promoting student achievement, will formally launch this fall.

“Under Dr. Núñez’s leadership, the Natalicio institute will study and propagate the high impact practices that lead to Hispanic student success, including many developed here at UTEP,” UTEP President Heather Wilson said. “This institute will help shape the future of higher education in America.”

The institute is supported by an endowment created in part by the estate of President Emerita Natalicio, by The University of Texas System Board of Regents, and by donations in her memory.

The Natalicio institute will serve as a national platform for researchers, thought leaders, philanthropists and policymakers to develop and evaluate policy and programs, advance innovation, and develop resources critical to accelerating educational outcomes among Hispanic students. Núñez will begin her role as executive director Sept. 1, 2022.

“I welcome the chance to join UTEP’s efforts toward the mission of promoting inclusive excellence,” said Núñez, a professor of higher education and student affairs at Ohio State University. “Dr. Natalicio’s visionary leadership and legacy inspired so many. I look forward to extending her approach to advancing equity in higher education.”

Born in Washington, D.C., and raised in Maryland, Núñez is the lead editor of the award-winning book, “Hispanic-Serving Institutions: Advancing Research and Transformative Practice.” She has collaborated on over $10 million in grants funded by agencies including the National Science Foundation to build capacity for inclusive science and research on Hispanic-Serving Institutions. In 2022, she was recognized in the Stanford Elsevier Scholar Index, which ranks the most-cited 2% of researchers in the world. Also this year, she was recognized as an American Educational Research Association Fellow, an honor given to top scholars in the field with sustained exceptional research contributions.

Fraire will join the institute July 1, 2022. He will bring 35 years of experience in public policy development at the state and federal levels. Since 2016, he has served as president and chief executive officer of the Texas Association of Community Colleges, where he led public policy advocacy and institutional reforms for the 50 community college districts in Texas.

The son of migrant farmworkers and an El Paso native, Fraire has represented research universities before the U.S. Congress and has served as director of policy analysis for the Hispanic Association of Colleges and Universities.

He said the Natalicio Institute will advance public policy and educational practice at the state and federal levels to help policymakers and higher education systems achieve greater postsecondary education outcomes among Hispanic students – a large and growing segment of the public school population and U.S. workforce.

“UTEP has a great standing in the public policy space,” said Fraire, who served on the congressionally-created Committee on Measures of Students Success and has received numerous state and national awards for leadership in public policy. “The Diana Natalicio Institute will serve as a national resource for institutions and policymakers across the nation to look to for research, professional development and policy guidance in advancing Hispanic student success.”

Natalicio, the 10th and longest-serving president of UTEP, passed away Sept. 24, 2021, at the age of 82. She served as president of UTEP for 31 years before her retirement in 2019 and was instrumental in the University’s ascent to Carnegie R1 research status. She was a steadfast advocate for students and was dedicated to ensuring UTEP’s growing enrollment reflected the demographics of the surrounding Paso del Norte region.

For information about the institute’s programing and initiatives, email [email protected]

About The University of Texas at El Paso

The University of Texas at El Paso is America’s leading Hispanic-serving university. Located at the westernmost tip of Texas, where three states and two countries converge along the Rio Grande, 84% of our more than 24,000 students are Hispanic, and half are the first in their families to go to college. UTEP offers 169 bachelor’s, master’s and doctoral degree programs at the only open-access, top-tier research university in America.