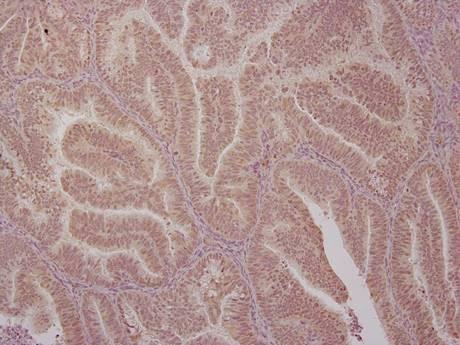 The hormone estrogen plays many critical roles in men and women, in both healthy tissues and in cancer. In breast and gynecologic cancers, estrogen sends signals to tumors instructing the cancer cells to grow out of control. In recent years, studies have shed light on the growth-promoting role of estrogen in breast cancer. In endometrial cancer, which arises in the lining of the uterus, estrogen is known to play a critical role in tumor development, yet many insights from how it affects breast cancer do not apply to endometrial cancer. New research, published today in the journal Cancer Research, outlines findings scientists hope will advance our understanding of endometrial cancer and lead to more effective treatments.

“We started out with a question of how estrogen signaling works in endometrial cancer,” said Adriana Rodriguez, lead study author. “Most of what we know about estrogen receptor comes from work in breast cancer, although we know that estrogen receptor affects different genes in the two cancer types. In this study, we went looking for which proteins influence estrogen receptor in endometrial cancer cells.” Rodriguez is a PhD student at the University of Utah and is a member of the Jay Gertz Laboratory at Huntsman Cancer Institute (HCI) at the University of Utah (U of U).

The researchers discovered that a protein called ETV4 plays a key role in how estrogen communicates with endometrial cancer cells. Estrogen sends pro-growth signals to the cells, and estrogen receptor carries out these signals. The study found that when ETV4 was removed from endometrial cancer cells, estrogen signaling was greatly reduced, subsequently leading to diminished tumor growth. “To our surprise, we found that ETV4 helped to promote estrogen signaling in two ways: first, it was telling estrogen receptor where to bind in the genome; and second, it was causing more estrogen receptor to be active,” said Jay Gertz, PhD, a cancer researcher at HCI and assistant professor of oncological sciences at the U of U. Gertz’s lab led the study. “If we can find out what is causing ETV4 to be active, then we have a chance of reducing growth-promoting estrogen signaling in uterine tumors.”

“Uterine cancer is the most common gynecologic cancer and the fourth most common cancer in Utah women,” says Gertz. “Unfortunately, this cancer is on the rise and there are limited treatments for the disease. We believe this study lays the groundwork for future research into ways of blocking estrogen signaling in endometrial cancer.”

Huntsman Cancer Institute (HCI) at the University of Utah is the official cancer center of Utah. The cancer campus includes a state-of-the-art cancer specialty hospital as well as two buildings dedicated to cancer research. HCI treats patients with all forms of cancer and is recognized among the best cancer hospitals in the country by U.S. News and World Report. As the only National Cancer Institute (NCI)-Designated Comprehensive Cancer Center in the Mountain West, HCI serves the largest geographic region in the country, drawing patients from Utah, Nevada, Idaho, Wyoming, and Montana. More genes for inherited cancers have been discovered at HCI than at any other cancer center in the world, including genes responsible for hereditary breast, ovarian, colon, head, and neck cancers, along with melanoma. HCI manages the Utah Population Database, the largest genetic database in the world, with information on more than 11 million people linked to genealogies, health records, and vital statistics. HCI was founded by Jon M. and Karen Huntsman.

Insilico to present at the 2019 Africa Health Conference