In response to a high-competition environment, Trinidadian killifish evolve larger brains, increasing their fitness and survival rates, according to a new study in Ecology Letters by biologists at The University of Texas at Arlington. 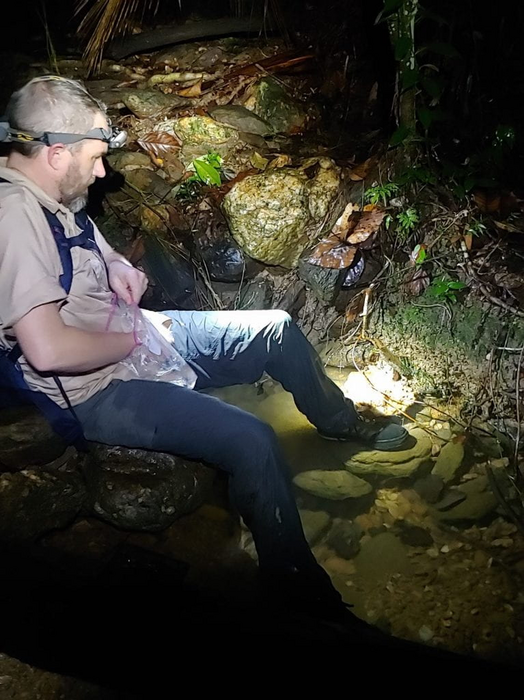 In response to a high-competition environment, Trinidadian killifish evolve larger brains, increasing their fitness and survival rates, according to a new study in Ecology Letters by biologists at The University of Texas at Arlington.

The study, led by biology Professor Matthew Walsh and Kaitlyn Howell (’22 PhD, Biology), examined the connection between brain size and fitness when killifish are found in their native habitats and when they are transplanted from sites with predators to high-competition sites that lack predators.

During a 30-day experiment near Arima, Trinidad, the researchers determined that when a fish is transplanted from a low- to a high-competition environment, there is a strong relationship between larger brain size and faster growth. That growth demonstrates increased ability to forage for food, giving killifish a greater chance at survival.

Furthermore, killifish from high-competition sites that remained in their native habitat for the duration of the experiment did not exhibit any change in brain size. The transplanted fish that persisted until the end of the experiment exhibited a much larger brain size than those fish that were not observed again.

“Scientists have known about large differences in vertebrate brain size for more than 100 years, and there are many hypotheses about why the vertebrate brain evolves,” Walsh said. “This study highlights the important role that competition may play.”

The study provides some of the first experimental evidence for which factors could be driving brain-size variation.

Howell said the experiment was prompted by the observation that killifish in sites without predators have larger brains than others.

“We knew there were differences in brain size between these two populations of fish, but we didn’t know why,” Howell said. “These results provide experimental support that larger brains can be adaptive and increase fitness in environments that are characterized by high population densities, low resources and intense competition.”