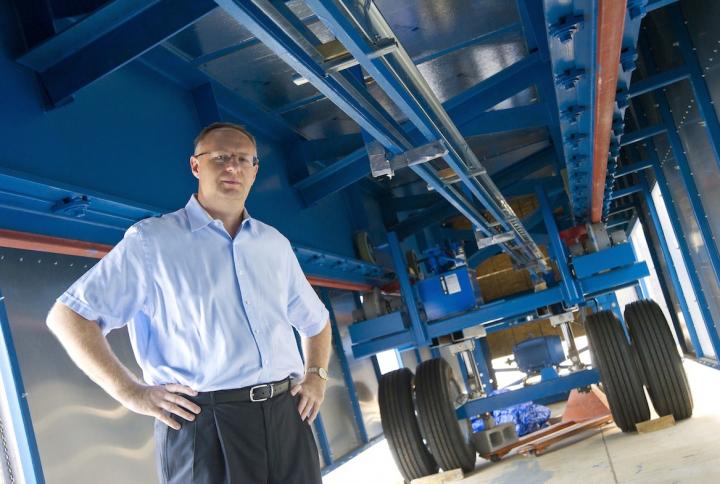 A University of Texas at Arlington civil engineering professor is working with the Texas Department of Transportation to test the durability of roads made from recycled asphalt, using an accelerated pavement testing machine that he built.

Stefan Romanoschi was granted a two-year, $1.26 million TxDOT award to determine which mixes of recycled asphalt will last longer and work better on the surface layers of Texas roads. UTA is collaborating with the Texas A&M Transportation Institute on the project.

He noted that RAP, the material obtained from milling damaged asphalt pavement, is used extensively in the production of new asphalt mix. The reutilization rate is about 90% in the United States, 60% in Europe and close to 100% in Japan.

The portable machine can run a full-sized truck axle back and forth over a pavement test section every six seconds. It allows researchers to simulate road stress and measure durability more efficiently than current methods.

The machine is about 68 feet long by 10 feet wide by 11 feet tall and weighs 60,000 pounds. The maximum single axle load it can put down is 36,000 pounds, which is double the legal limit in most U.S states for single axles.

The pavement testing center greatly reduces the amount of time needed to determine whether an asphalt mixture is a viable candidate for road material. Cities and counties can use Romanoschi’s data to write construction requirements for its contractors that maximize the life of its roads.

“TxDOT is constantly searching for ways to improve or lengthen roadway life,” Abolmaali said. “Seeing how the recycled asphalt performs and how long it lasts could help the agency change the way it maintains roads.”

With TxDOT responsible for about 80,000 miles of roads in Texas, Romanoschi’s testing facility could stay quite busy. Plus, he said that understanding the effects of truck platooning technology will require some sort of advanced and accelerated pavement testing.

“In that technology, which relies on driverless vehicles, all trucks pass in the same lateral position, causing more damage to pavements,” Romanoschi said. “That would cause more damage to the roads. We will need to find out which road configurations and materials last longer under this channelized traffic.”

Scienmag Jul 15, 2019
Credit: HZB At present, niobium is the material of choice for constructing superconducting radio-frequency…