Using zirconium as an additive in super-strong composite materials 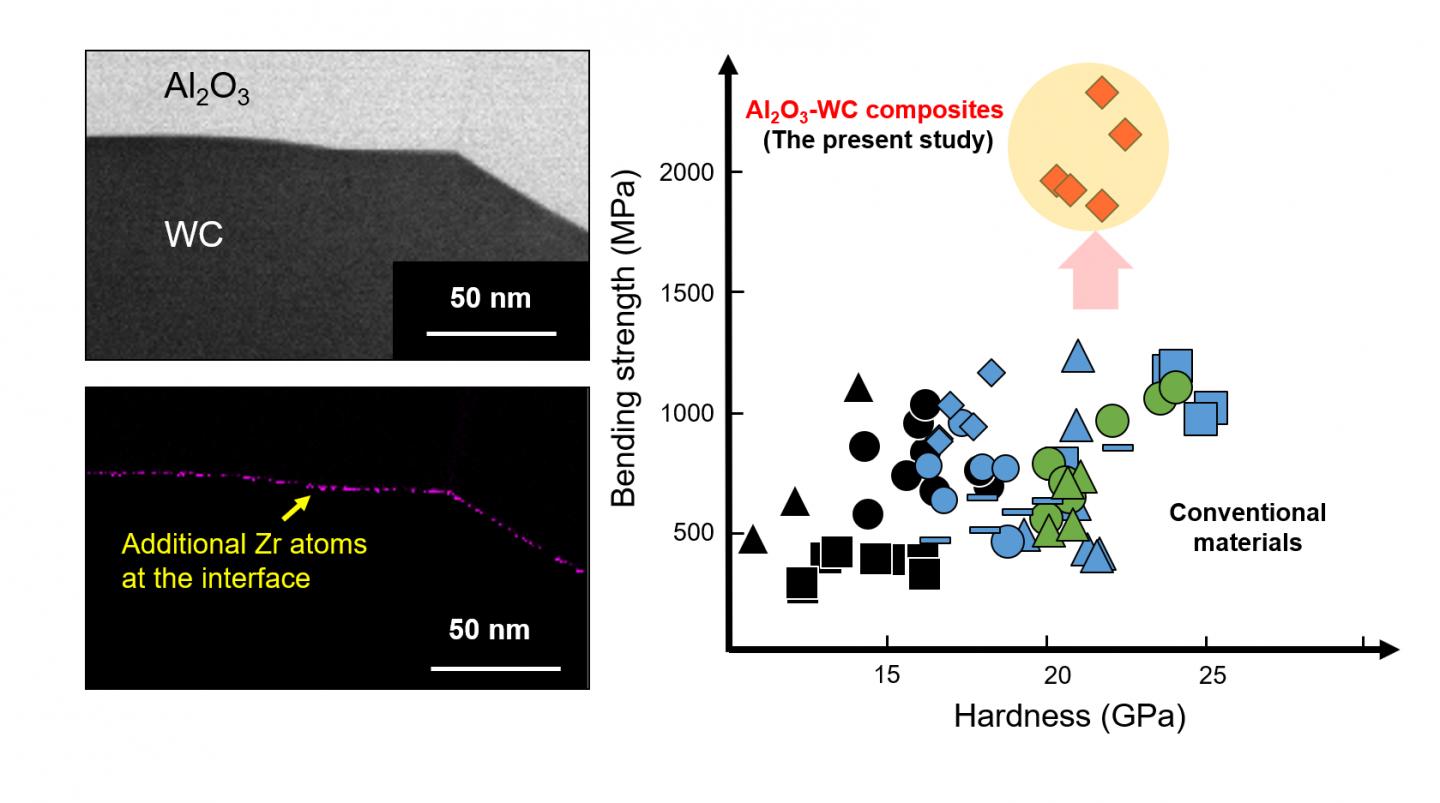 Given the potential utility of Al2O3-WC CMCs as superhard materials, researchers around the world have tested several formulations to identify one with a high bending strength, which is a measure of the physical stress a material can be subjected to before it becomes permanently bent or broken. Previously, no group had developed an Al2O3-WC CMC with a bending strength greater than 1 gigapascal, which meant that those earlier Al2O3-WC CMCs could not outperform the existing CMC materials. In an attempt to achieve a greater bending strength, the aforementioned team of scientists from Japan carried out a study, which was led by scientists from Nagoya University, in collaboration with NGK Spark Plug Co., Ltd. In their study, the scientists experimented with adding in small amounts of zirconium dioxide (ZrO2) during the creation of Al2O3-WC CMCs. This addition yielded “superhard” Al2O3-WC CMCs with bending strengths greater than 2 gigapascals. As lead investigators Dr. Tomohiro Nishi and Dr. Katsuyuki Matsunaga note, “This is an all-time high in the field.”

Notably, the investigators achieved these considerable bending strength improvements with a relatively modest addition of ZrO2. The additive represented less than 5% of the mass of the finished Al2O3-WC CMCs, which is less than the amount of additive usually present in additive-enhanced CMCs. When the investigators studied the structures of their superhard ZrO2-enhanced Al2O3-WC CMCs using a method called atomic-resolution scanning transmission electron microscopy, they found that the Zr atoms were located in thin layers between sheets of Al2O3 and WC. With respect to the interfaces between the Al2O3 and WC sheets, Dr. Nishi and Dr. Matsunaga state, “Such interfaces are generally weak points with respect to mechanical properties.” Therefore, the interface between the sheets is a plausible location for Zr atoms to exert effects that strengthen the Al2O3-WC CMCs. Indeed, when the investigators modeled the effects of the Zr atoms using techniques from a field of mathematical physics known as density functional theory, their results indicated that an interfacial layer of Zr atoms would enhance the stability of their CMCs.

The investigators foresee a bright future for their novel CMCs. Commenting on their potential applications, Dr. Matsunaga states, “The materials we developed can be used as superhard materials in metalworking devices for cutting hard metallic components to be used in airplanes and automobiles.” In fact, they note that engineers at NGK Spark Plug Co., Ltd. have already commercialized the materials as components in cutting tools.

The creation of these enhanced Al2O3-WC CMCs serves as an example of the considerable improvements in physical properties that can be achieved with relatively minor additions to a material.

The paper, “Advanced superhard composite materials with extremely improved mechanical strength by interfacial segregation of dilute dopants,” was published in the journal Scientific Reports on December 3, 2020, at DOI: 10.1038/s41598-020-78064-0.