Mutations that lead to muscle atrophy can be repaired with the gene editor CRISPR-Cas9. A team led by ECRC researcher Helena Escobar has now introduced the tool into human muscle stem cells for the first time using mRNA, thus discovering a method suitable for therapeutic applications. 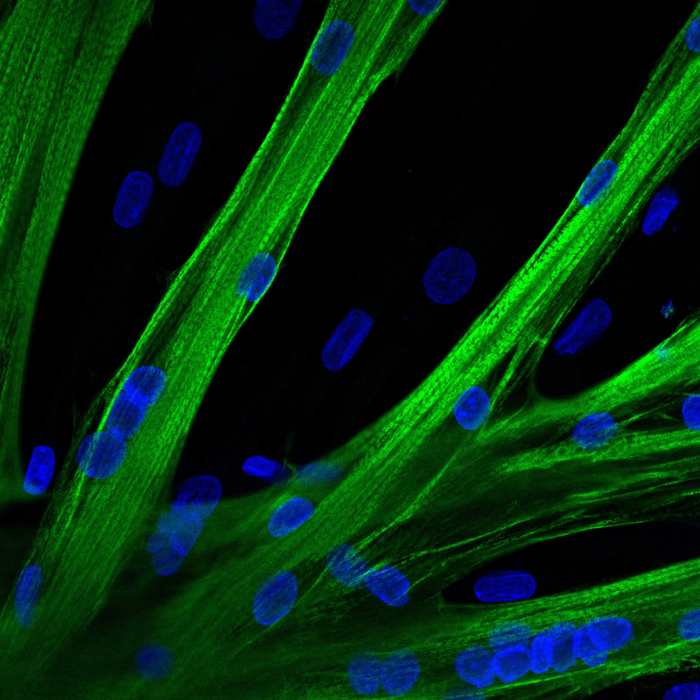 Mutations that lead to muscle atrophy can be repaired with the gene editor CRISPR-Cas9. A team led by ECRC researcher Helena Escobar has now introduced the tool into human muscle stem cells for the first time using mRNA, thus discovering a method suitable for therapeutic applications.

It may be only a tiny change in the genome, but this small difference can have fatal consequences: Muscular dystrophies are almost always caused by a single faulty gene. As different as the mutations are in this group of approximately 50 disorders, they all ultimately lead to a very similar outcome. “Due to the genetic defect, changes occur in muscular structure and function so that sufferers experience progressive muscle atrophy,” explains Professor Simone Spuler, head of the Myology Lab at the Experimental and Clinical Research Center (ECRC), a joint institution of the Berlin-based Max Delbrück Center for Molecular Medicine in the Helmholtz Association (MDC) and Charité – Universitätsmedizin Berlin. This condition can be fatal especially if the respiratory or cardiac muscles are affected.

The method has already proven successful in mice

Muscular dystrophies are currently incurable, and that is exactly what Spuler and her team want to change. Their latest paper, which is appearing in the journal Molecular Therapy Nucleic Acids, paves the way for a clinical trial in which a therapy developed at the ECRC will be tested for the first time on patients with hereditary muscle atrophy. We have for several years been pursuing the idea of taking muscle stem cells from diseased patients, using CRISPR-Cas9 to correct the faulty genes, and then injecting the treated cells back into the muscles so that they can proliferate and form new muscle tissue,” explains Dr. Helena Escobar, a postdoctoral researcher in Spuler’s lab and along with her co-last author of the current paper.

A while back, the researchers were able to show that the method worked in mice suffering from muscle atrophy. “Yet our method had a catch,” Escobar says, explaining:. “We introduced the genetic instructions for the gene editor into the stem cells using plasmids – which are circular, double-stranded DNA molecules derived from bacteria.” But plasmids could unintentionally integrate into the genome of human cells, which is also double stranded, and then lead to undesirable effects that are difficult to assess. “That made this method unsuitable for treating patients,” Escobar says.

So the team set out to find a better alternative. They found it in the form of messenger RNA (mRNA), a single-stranded RNA molecule that recently gained acclaim as a key component of two Covid-19 vaccines. “In the vaccines, the mRNA molecules contain the genetic instructions for building the virus’s spike protein, which the pathogen uses to invade human cells,” explains Christian Stadelmann, a doctoral student in Spuler’s lab. Along with Silvia Di Francescantonio from the same team, he is one of the co-lead authors of the study. “In our work we use mRNA molecules that contain the building instructions for the gene-editing tool.”

To get the mRNA into the stem cells, the researchers used a process called electroporation, which temporarily makes cell membranes more permeable to larger molecules. “With the help of mRNA containing the genetic information for a green fluorescent dye, we first demonstrated that the mRNA molecules entered almost all the stem cells,” Stadelmann explains. In the next step, the team used a deliberately altered molecule on the surface of human muscle stem cells to show that the method can be used to correct gene defects in a targeted manner.

A clinical trial is in the works

Finally, the team tried out a tool similar to the CRISPR-Cas9 gene editor that does not cut the DNA, but only tweaks it at one spot with pinpoint accuracy. “This allows us to work with even greater precision, yet this tool is not suitable for every mutation that causes muscular dystrophy,” Stadelmann explains. In petri dish experiments, he and his team have now been able to show that the corrected muscle stem cells are just as capable as healthy cells of fusing with each other and forming young muscle fibers.

“We are now planning to launch a first clinical trial with five to seven patients suffering from muscular dystrophy toward the end of the year,” Spuler says. The Paul-Ehrlich-Institut (PEI), Federal Institute for Vaccines and Biomedicines, which is responsible for approving the clinical trial, has been supporting the idea in an advisory meeting, she adds. Of course we cannot expect miracles, says the researcher, adding: “Sufferers who are in wheelchairs won’t just get up and start walking after the therapy. But for many patients, it is already a big step forward when a small muscle that is important for grasping or swallowing functions better again. The idea of repairing larger muscles, such as those needed for standing and walking, is already under consideration.” Yet for this to become a real-world therapy, the molecular tools would have to become so safe that they could be introduced without any reservations – not only into isolated muscle stem cells, but also directly into the degenerated muscle.

A pioneer in muscle repair – a portrait of Simone Spuler

The Max Delbrück Center for Molecular Medicine in the Helmholtz Association (MDC) is one of the world’s leading biomedical research institutions. Max Delbrück, a Berlin native, was a Nobel laureate and one of the founders of molecular biology. At the MDC’s locations in Berlin-Buch and Mitte, researchers from some 60 countries analyze the human system – investigating the biological foundations of life from its most elementary building blocks to systems-wide mechanisms. By understanding what regulates or disrupts the dynamic equilibrium in a cell, an organ, or the entire body, we can prevent diseases, diagnose them earlier, and stop their progression with tailored therapies. Patients should benefit as soon as possible from basic research discoveries. The MDC therefore supports spin-off creation and participates in collaborative networks. It works in close partnership with Charité – Universitätsmedizin Berlin in the jointly run Experimental and Clinical Research Center (ECRC ), the Berlin Institute of Health (BIH) at Charité, and the German Center for Cardiovascular Research (DZHK). Founded in 1992, the MDC today employs 1,600 people and is funded 90 percent by the German federal government and 10 percent by the State of Berlin. www.mdc-berlin.de