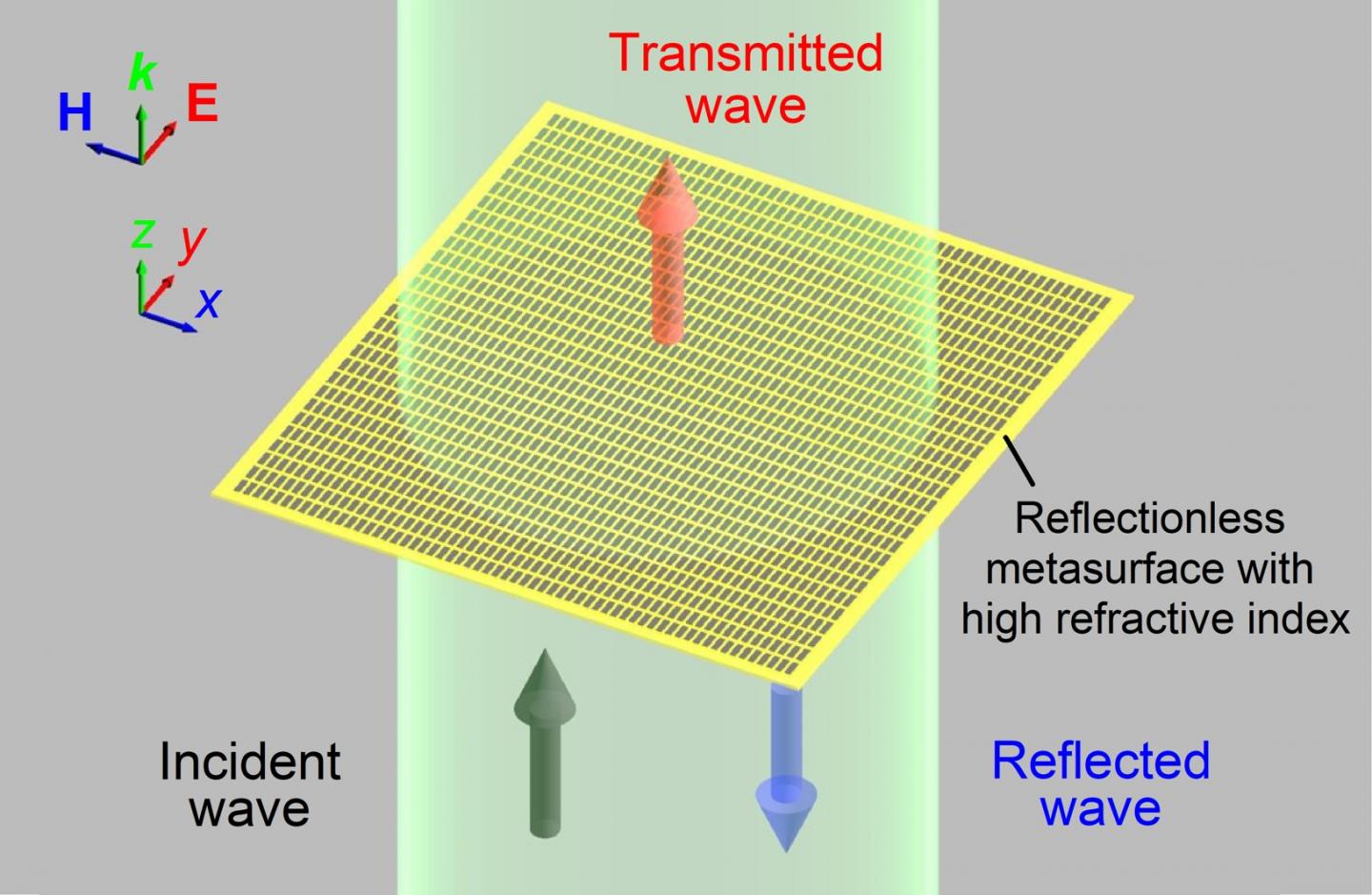 Japanese researchers successfully tested reflectionless, highly refractive index metasurface that may eventually be used in practical applications to send, receive, and manipulate light and radio waves in the terahertz waveband (THz). THz is measured in millionths of a meter, known as micrometers. The metasurface, an artificial two-dimensional flat material, was made of micro-sized cut metal wires of silver paste ink placed on both the front and back of a polyimide film. The team, led by Takehito Suzuki, Associate Professor at the Tokyo University of Agriculture and Technology (TUAT) Institute of Engineering, published their findings on April 29, 2021 in Optics Express.

Such flat metasurfaces represent a leap forward in the study of THz optics, because they may be flexible, adaptable to a much wider array of potential uses, and far smaller than the present generation of THz optics which rely upon naturally occurring materials that have fixed indices of refraction in the THz waveband, such as cyclo-olefin polymer, magnesium oxide, and silicon. An index of refraction of a material shows that how slow electromagnetic waves travel in the material compared to a vacuum.

A greater ability to receive, transmit, control, and manipulate electromagnetic waves above 1.0 THz is necessary to unlock their potential, which remains largely untapped, according to Suzuki. “The reflectionless metasurface with a high refractive index above 1.0 THz can offer an accessible platform for terahertz flat optics such as 6G wireless communications and other possible commercial applications,” Suzuki said. “In addition to vastly faster wireless data transfer speeds, a better ability to manipulate THz waves using metasurfaces may greatly advance technology in the areas of wavefront shaping, beam forming, polarization control, and optical vortices – subjects of great interest to the scientific and communication communities.”

Suzuki’s research team set out to support the greater scientific community’s goal of replacing conventional three-dimensional bulky optical components with two-dimensional flat ones, a feat that would free up space and allow the development of smaller, more adaptable scientific and communication instruments, as well as more advanced security cameras.

The team, Harumi Asada, Kota Endo, and Takehito Suzuki, created their experimental metasurface using silver paste ink and a very thin polyimide film. Cut metal wires with a silver paste ink laid onto the film by a super-fine ink-jet printer (SIJ Technology, Inc.) capable of drawing lines in the order of 10 micrometers in width, yielded the result they had hoped for: The metasurface, which was made of 80,036 pairs of cut metal wires with silver paste ink on both the front and back of 6×6 square millimeters (roughly an infant’s thumbnail) plot of a polyimide film, has a high refractive index and low reflection at 3.0 THz.

Suzuki and his collaborating scientists plan to further investigate the potential of flat optics for use in the THz waveband, with the hope of finding scalable, commercially viable materials suitable for a wide array of future uses.

About Tokyo University of Agriculture and Technology (TUAT):

TUAT is a distinguished university in Japan dedicated to science and technology. TUAT focuses on agriculture and engineering that form the foundation of industry, and promotes education and research fields that incorporate them. Boasting a history of over 140 years since our founding in 1874, TUAT continues to boldly take on new challenges and steadily promote fields. With high ethics, TUAT fulfills social responsibility in the capacity of transmitting science and technology information towards the construction of a sustainable society where both human beings and nature can thrive in a symbiotic relationship. For more information, please visit http://www.tuat.ac.jp/en/.