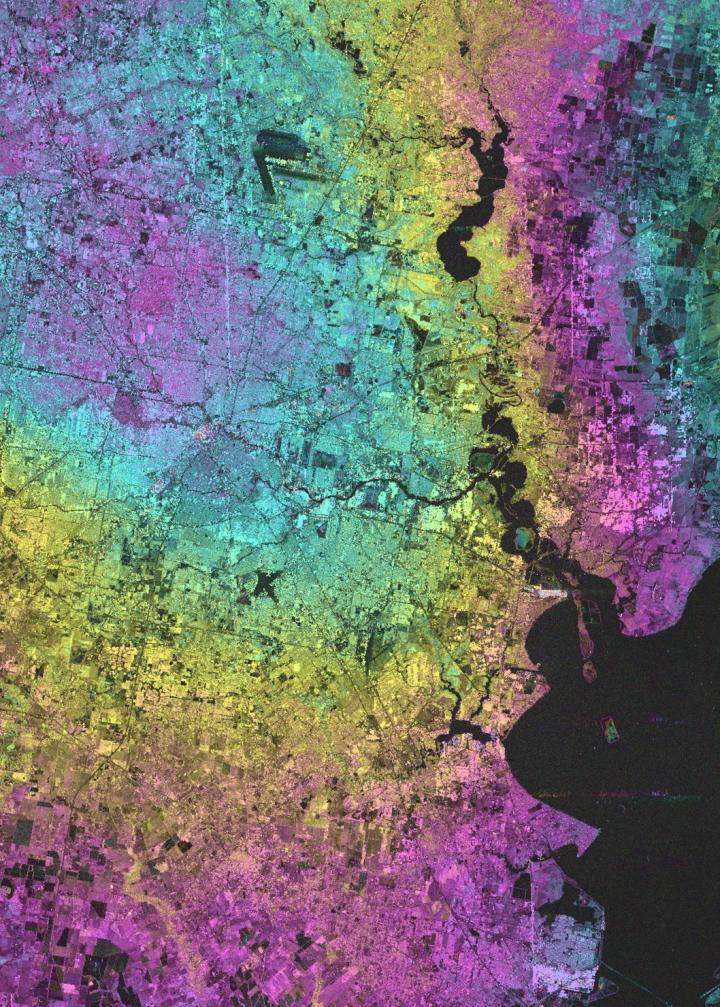 Credit: University of Texas at Austin.

The types of land around us play an important role in how major storms will unfold — flood waters may travel differently over rural versus urban areas, for example. However, it’s challenging to get an accurate picture of land types using only satellite image data because it is so difficult to interpret.

Researchers at the Cockrell School of Engineering have, for the first time, applied a machine learning algorithm to measure the surface roughness of different types of land with a high level of detail. The team used a type of satellite imagery that is more dependable and easier to capture than typical optical photographs but also more challenging to analyze. And they are working to integrate this data into storm surge models to give a clearer picture of what will happen during major weather events.

“You can imagine that when a storm approaches land it will move much faster and farther over open or barren land,” said Ke Wang, a graduate researcher in the lab of Ann Chen, assistant professor in the Department of Aerospace Engineering and Engineering Mechanics. “And, in contrast, storms move slower over rougher surfaces like densely vegetated forests.”

Today, the main source for data about land types comes from the National Oceanic and Atmospheric Administration. But that data is only updated every five or six years, making it hard to get a clear picture of how the land changes over time. The researchers aim to make their land data capable of at least annual updates and, ideally, more frequent than that.

For their experiment, the team analyzed publicly available Synthetic Aperture Radar, or SAR, images taken from a Japanese satellite. SAR images are different from the powerful cameras in other satellites because they actively illuminate the ground using radar signals rather than relying on light from the sun, which may be limited at night or when cloud cover is present.

Standard, physics-based models have struggled to accurately analyze these types of images. But the team’s machine learning algorithm was able to create a clear enough picture of land roughness data that the information could be used in storm surge modeling.

Using these publicly available satellite images, the algorithm automatically classifies different types of land by analyzing characteristics such as topography and brightness from the satellite data. The research primarily focused on areas along the Gulf Coast around New Orleans and Houston, where rapid land changes and increases in strong storms put these major cities more at risk for significant damage.

The team is working with Clint Dawson, professor and chair of the Department of Aerospace Engineering and Engineering Mechanics and leader of the Oden Institute’s Computational Hydraulics Group, to adapt the data for his storm surge models.

“Storm surge is a competition between wind pushing water towards the coast, and the coast’s ability to withstand the force of the surge,” Dawson said. “There is a big difference in storm surge when the coast is covered with flexible grass versus thick trees such as mangroves. The Texas coast is particularly vulnerable to surge because it is primarily low-lying marshland and prairie. Therefore, knowing the type of land cover in a coastal region is essential to being able to mitigate and predict storms surge.”

This data could help decision-makers contemplating methods to blunt the impact of storms, said Chen, who is the principal investigator on the paper published in IEEE Transactions on Geoscience and Remote Sensing. For example, policymakers have long debated the possibility of building “green walls” of vegetation to protect inland areas from hurricanes and other potentially dangerous storms. This information could help figure out the best places to put these green walls to protect vulnerable areas.

Though this research is mostly focused on storm surge models, there are a number of other applications. It could be used to look at forests and classify trees to understand how much potential wood supply exists and impacts of timber harvesting. And it could someday help track how land changes over time, whether due to things like deforestation, urban development or sea level rise.

But that would require improvements in satellite data. The researchers’ algorithm needs approximately 10 images to make an accurate characterization of land. If it took a year to get those 10 images, it could tell what type of land is in that place, but it could not analyze how the land changed throughout the year. However, NASA is in the midst of a program to update and upgrade satellites needed to capture these images. They will collect data more regularly at a higher resolution.

“The space image data we have now is a lot more than we had 10 years ago,” Chen said. “And in the next 10 years, with the quality and quantity of the data we are going to have, it’s going to be a time of exponential growth.”