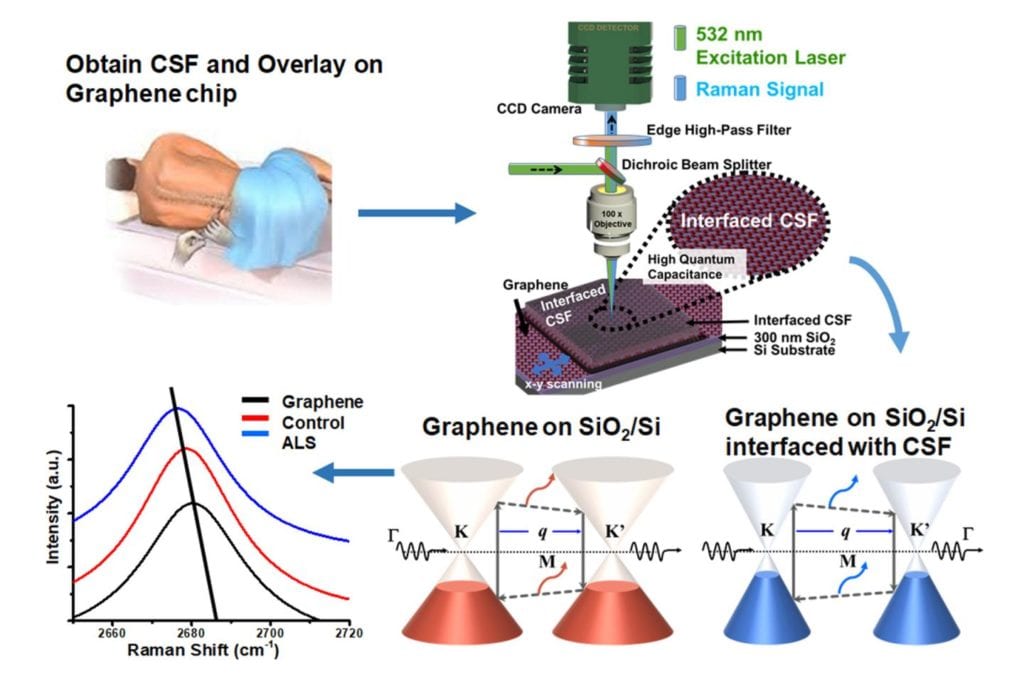 The wonders of graphene are numerous — it can enable flexible electronic components, enhance solar cell capacity, filter the finest subatomic particles and revolutionize batteries. Now, the “supermaterial” may one day be used to test for amyotrophic lateral sclerosis, or ALS — a progressive, neurodegenerative disease which is diagnosed mostly by ruling out other disorders, according to new research from the University of Illinois at Chicago published in ACS Applied Materials & Interfaces.

When cerebrospinal fluid from patients with ALS was added to graphene, it produced a distinct and different change in the vibrational characteristics of the graphene compared to when fluid from a patient with multiple sclerosis was added or when fluid from a patient without neurodegenerative disease was added to graphene. These distinct changes accurately predicted what kind of patient the fluid came from – one with ALS, MS or no neurodegenerative disease.

Graphene is a single-atom-thick material made up of carbon. Each carbon atom is bound to its neighboring carbon atoms by chemical bonds. The elasticity of these bonds produces resonant vibrations, also known as phonons, which can be very accurately measured. When a molecule interacts with graphene, it changes these resonant vibrations in a very specific and quantifiable way.

“Graphene is just one atom thick, so a molecule on its surface in comparison is enormous and can produce a specific change in graphene’s phonon energy, which we can measure,” said Vikas Berry, associate professor and head of chemical engineering in the UIC College of Engineering and an author on the paper. Changes in graphene’s vibrational characteristics depend on the unique electronic characteristics of the added molecule, known as its “dipole moment.”

“We can determine the dipole moment of the molecule added to graphene by measuring changes in graphene’s phonon energy caused by the molecule,” Berry explained.

Berry and his colleagues used graphene to identify whether the cerebrospinal fluid was from a patient with ALS or multiple sclerosis — two progressive neurodegenerative disorders — or from someone without neurodegenerative disease. Since there is no definitive test for ALS, an objective diagnostic test would help patients start receiving treatment sooner to slow the disease.

Cerebrospinal fluid was obtained from the Human Brain and Spinal Fluid Resource Center, which banks fluid and tissue from deceased individuals. Berry, Dr. Ankit Mehta, assistant professor of neurosurgery and director of spinal oncology in the UIC College of Medicine, and their colleagues tested the cerebrospinal fluid from seven people without neurodegenerative disease; from 13 people with ALS; from three people with multiple sclerosis and from three people with an unknown neurodegenerative disease.

“We saw unique and distinct changes in graphene’s phonon energies depending on whether the fluid was from someone with ALS, multiple sclerosis or someone without neurodegenerative disease,” Berry said. “We were also able to determine whether the fluid was from someone over age 55 or younger than 55 when we tested cerebrospinal fluid from ALS patients. We think the difference we see between older and younger ALS patients is driven by unique biochemical signatures we are picking up that correlate to inherited ALS, which usually produces symptoms before age 55, and what’s known as sporadic ALS which occurs later in life.”

Berry believes the graphene is picking up on the unique biosignatures — combinations of proteins, and other biomolecules — present in the cerebrospinal fluid of individuals with different diseases.

“The electronic properties of graphene have been extensively studied, but only recently have we begun to examine its phononic properties as a way to detect diseases,” Berry said. “And it turns out that graphene is an extremely versatile and accurate detector of biosignatures of diseases found both in cerebrospinal fluids and whole cells.”

Bijentimala Keisham from the UIC College of Engineering; Steven Denyer, Pouyan Kheirkhan, Gregory Arnone, Abhiraj Bhimani and Dr. Ankit Mehta, from the department of neurosurgery in the UIC College of Medicine, Akop Seksenyan from the Rosalind Franklin University of Medicine and Science, Chicago, and Clive Svendsen from Cedars-Sinai Medical Center, Los Angeles, are co-authors on the paper.

This research was funded by grant N00014-18-2583 from the Office of Naval Research, grant CMMI-1503681 from the National Science Foundation and a University of Illinois at Chicago Seed Grant.

Photonics: The curious case of the disappearing cylinders