Using fossil plant molecules to track down the Green Sahara

New publication: Researchers explain how vegetation was possible in the desert 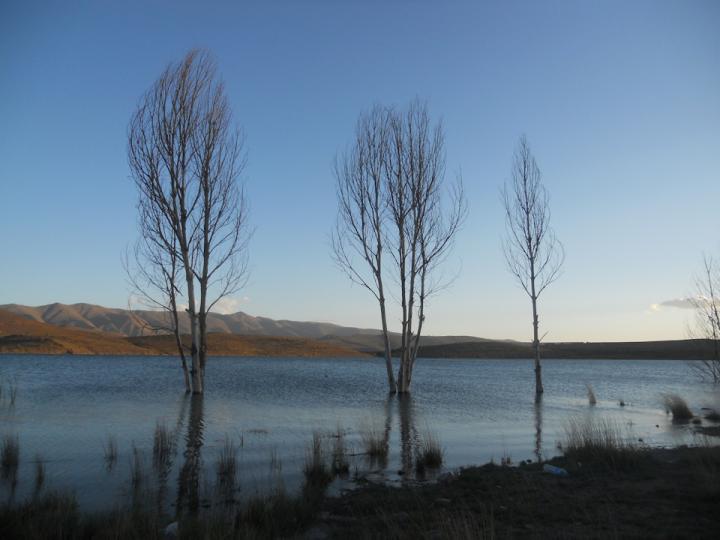 The Sahara has not always been covered by only sand and rocks. During the period from 14,500 to 5,000 years ago large areas of North Africa were more heavily populated, and where there is desert today the land was green with vegetation. This is evidenced by various sites with rock paintings showing not only giraffes and crocodiles, but even illustrating people swimming in the “Cave of Swimmers”. This period is known as the Green Sahara or African Humid Period. Until now, researchers have assumed that the necessary rain was brought from the tropics through an enhanced summer monsoon. The northward shift of the monsoon was attributed to rotation of the Earth’s tilted axis that produces higher levels of solar radiation over North Africa approximately every 25,000 years. However, climate models have not been able to simulate plant growth sufficient to create a Green Sahara with rain that stem only from the summer monsoon. Scientists are convinced that permanent vegetation at that time in North Africa cannot be explained by a single rainy season each year.

Dr. Enno Schefuß of MARUM and Dr. Rachid Cheddadi of the University of Montpellier (France) together with an international team of researchers have analyzed pollen and leaf waxes extracted from a sediment core in order to reconstruct the vegetation cover and amount of rainfall in the past. The core was retrieved from Lake Tislit in the High Atlas Mountains of Morocco. Fossil components of plants such as pollen and refractory plant molecules are deposited in lakes just as in marine sediments. These enable to identify the types of vegetation and climate conditions from the past.

“Our results are very clear,” explains Enno Schefuß, “While the leaf waxes indicate increased rainfall during the African Humid Period, the pollen explicitly reveal that the vegetation was Mediterranean, not subtropical or even tropical.” Mediterranean plants can tolerate arid conditions in the summer as long as they receive sufficient rain in the winter. “This strongly suggests that the monsoon reconstructions of previous studies need to be reconsidered.”

Based on these findings, Schefuß and his colleagues have developed a new concept to explain the Green Sahara. During the period of the Green Sahara, as the monsoon was intensifying and moving northward in the summer, there must have been a southward shift of the belt of westerlies in the winter that brought winter precipitation to North Africa. The team subsequently tested their past climate reconstructions from the Tislit record using a mechanistic vegetation model. “We have winter rain on the northern margin of the Sahara, the monsoon on the southern margin, and between the two areas an overlap of the two rain systems which provides rains there during both summer and winter, albeit rather sparsely,” explains Rachid Cheddadi. The vegetation model simulations clearly showed that a Green Sahara was formed under this climate scenario. A continuous vegetation cover could only form with precipitation in two seasons; the plants would not survive a long dry phase after a short rainy period.

Schefuß and his colleagues describe their results as a paradigm change in the climate research explaining the cause of the Green Sahara. The implications of this include not only a better understanding of past climate conditions, but also an improvement of the predictions for future climate and vegetation trends in the region, as well a contribution to archaeological studies of settlement patterns and migration routes.

A planned expedition using the Research Vessel METEOR to retrieve additional high-resolution sediment archives from the near-coastal deposits off Morocco was postponed due to the CoVid-19 pandemic. However, it will be rescheduled as soon as possible in order to further strengthen this research and the German-Moroccan cooperation.

MARUM produces fundamental scientific knowledge about the role of the ocean and the seafloor in the total Earth system. The dynamics of the oceans and the seabed significantly impact the entire Earth system through the interaction of geological, physical, biological and chemical processes. These influence both the climate and the global carbon cycle, resulting in the creation of unique biological systems. MARUM is committed to fundamental and unbiased research in the interests of society, the marine environment, and in accordance with the sustainability goals of the United Nations. It publishes its quality-assured scientific data to make it publicly available. MARUM informs the public about new discoveries in the marine environment and provides practical knowledge through its dialogue with society. MARUM cooperation with companies and industrial partners is carried out in accordance with its goal of protecting the marine environment.