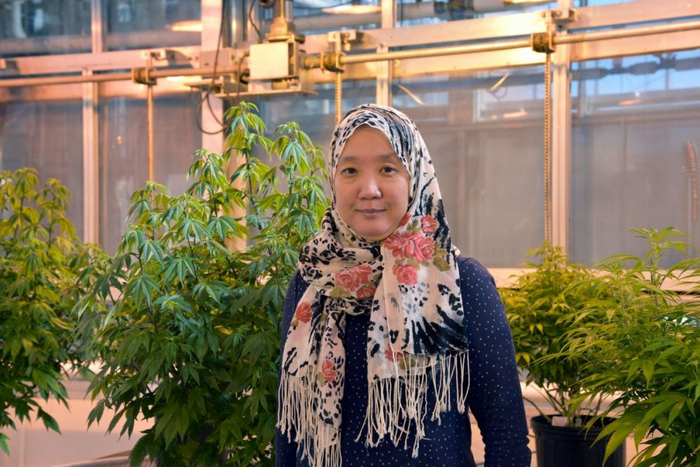 One of the best-known cannabinoids is cannabidiolic acid (CBD), which is used to treat pain, inflammation, nausea and more.

Cannabinoids are produced by trichomes, small spikey protrusions on the surface of cannabis flowers. Beyond this fact, scientists know very little about how cannabinoid biosynthesis is controlled.

Yi Ma, research assistant professor, and Gerry Berkowitz, professor in UConn’s College of Agriculture, Health and Natural Resources received funding through the National Research Initiative from the U.S. Department of Agriculture to discover the underlying molecular mechanisms behind trichrome development and cannabinoid synthesis.

Berkowitz and Ma, along with former graduate students Samuel Haiden and Peter Apicella, discovered transcription factors responsible for trichome initiation and cannabinoid biosynthesis. Transcription factors are molecules that determine if a piece of an organism’s DNA will be transcribed into RNA, and thus expressed.

In this case, the transcription factors cause epidermal cells on the flowers to morph into trichomes. The team’s discovery was recently published as a feature article in Plants. Related trichome research was also published in Plant Direct. Due to the gene’s potential economic impact, UConn has filed a provisional patent application on the technology.

With this new grant, the researchers will continue to explore how these transcription factors play a role in trichome development during flower maturation.

Berkowitz and Ma will clone the promoters (the part of DNA that transcription factors bind to) of interest. They will then put the promoters into the cells of a model plant along with a copy of the gene that makes fireflies light up, known as firefly luciferase; the luciferase is fused to the cannabis promoter so if the promoter is activated by a signal, the luciferase reporter will generate light. “It’s a nifty way to evaluate signals that orchestrate cannabinoid synthesis and trichome development,” says Berkowitz.

The researchers will load the cloned promoters and luciferase into a plasmid. Plasmids are circular DNA molecules that can replicate independently of the chromosomes. This allows the scientists to express the genes of interest even though they aren’t part of the plant’s genomic DNA. They will deliver these plasmids into the plant leaves or protoplasts, plant cells without the cell wall.

When the promoter controlling luciferase expression comes into contact with the transcription factors responsible for trichome development (or triggered by other signals such as plant hormones), the luciferase ‘reporter’ will produce light. Ma and Berkowitz will use an instrument called a luminometer, which measures how much light comes from the sample. This will tell the researchers if the promoter regions they are looking at are controlled by transcription factors responsible for increasing trichome development or modulating genes that code for cannabinoid biosynthetic enzymes. They can also learn if the promoters respond to hormonal signals.

In prior work underlying the rationale for this experimental approach, Ma and Berkowitz along with graduate student Peter Apicella found that the enzyme that makes THC in cannabis trichomes may not be the critical limiting step regulating THC production, but rather the generation of the precursor for THC (and CBD) production and the transporter-facilitated shuttling of the precursor to the extracellular bulb might be key determinants in developing cannabis strains with high THC or CBD.

Most cannabis farmers grow hemp, a variety of cannabis with naturally lower THC levels than marijuana. Currently, most hemp varieties that have high CBD levels also contain unacceptably high levels of THC. This is likely because the hemp plants still make the enzyme that produces THC. If the plant contains over 0.3% THC, it is considered federally illegal and, in many cases, must be destroyed. A better understanding of how the plant produces THC means scientists could selectively knock out the enzyme that synthesizes THC using genome editing techniques such as CRISPR. This would produce plants with lower levels of or no THC.

“We envision that the fundamental knowledge obtained can be translated into novel genetic tools and strategies to improve the cannabinoid profile, aid hemp farmers with the common problem of overproducing THC, and benefit human health,” the researchers say.

On the other hand, this knowledge could lead to the production of cannabis plants that produce more of a desired cannabinoid, making it more valuable and profitable.

In addition to sharing these findings with cannabis scientists, industry, and growers, the researchers will incorporate this new knowledge into UConn courses on cannabis horticulture.

This grant will also support the training of undergraduates interested in cannabis research, providing them with the skills to enter the workforce.