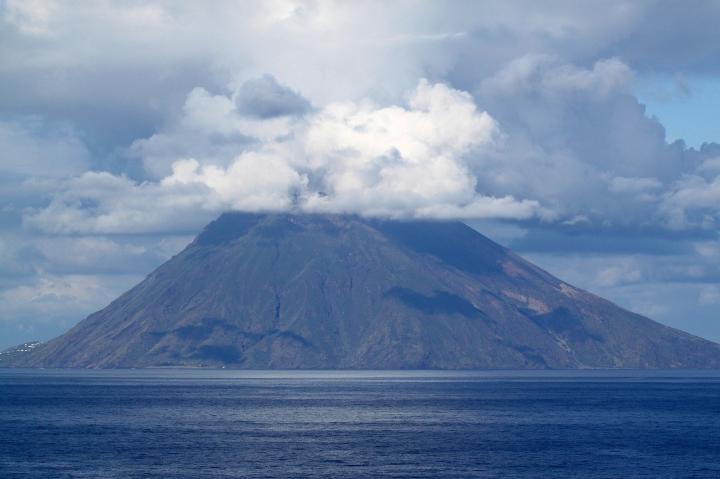 Stromboli, the ‘lighthouse of the Mediterranean’, is known for its low-energy but persistent explosive eruptions, behaviour that is known scientifically as Strombolian activity. This feature has long been an attraction for tourists and volcanologists from all over the world.

Occasionally, however, more intense and sudden explosions occur, most recently in July and August last year (2019). These are known as ‘Strombolian paroxysms’. During such events several of Stromboli’s craters are active simultaneously and much greater volumes of pyroclastic materials are erupted than is usual for the volcano.

In a new study, Major explosions and paroxysms at Stromboli (Italy): a new historical catalog and temporal models of occurrence with uncertainty quantification, published in the journal Nature Scientific Reports, researchers from Italy’s National Institute of Geophysics and Volcanology (INGV) and the University of Bristol use historical records to estimate the frequency of these bigger Strombolian paroxysms and investigate if the volcano has its own eruption ‘memory’ as evidenced, in statistical terms, by a temporal recurrence relationship between one paroxysmal eruption and the next.

The catalogue describes 180 violent explosive events of varying scale that occurred at Stromboli from 1879 to 2020. The researchers critically evaluated events described in past scientific works and information recorded in historical texts, and then determined, on an objective and homogeneous evidential basis, the type and intensity of the explosive events. This involved appraising any narrative hyperbole in the old descriptions.

Massimo Pompilio, senior researcher at INGV and co-author of the study, said: “The new catalogue makes it possible to review the classification of numerous events through the critical analysis of historical sources. From the analysis it emerges that the average annual rate of paroxysms over the last 140 years was, roughly, one event every four years or so”. This rate is close to that observed for the last ten years, but is much lower than in the 1940s, when these paroxysmal events were much more frequent.

“The volcano therefore alternates between periods of intense activity and periods of relative quiet. The short span of 56 days observed between the two paroxysms of summer 2019 is not a rare situation. Five times in the past 140 years there have been even shorter inter-event times (intervals between events). Conversely, there have been four periods without paroxysms lasting from between nine to 15 years, and one interval without paroxysms that lasted for 44 years, from 1959 to 2003.”

This information is useful in a forecasting context as it can help estimate the probabilities of future occurrence of these volcanic phenomena.

Andrea Bevilacqua, INGV researcher and first author of the study explains: “When a phenomenon such as a volcanic explosion occurs at irregular intervals in time, what is studied is the distribution of the ‘inter-event’ times, i.e. the times elapsed in passed between one explosion and the next. In particular, the development of inter-event models allows us to calculate the probability of an explosion occurring as a function of the time elapsed since the last event of that type”.

The novelty and uniqueness of this new research will be of great interest to volcanologists and scientists worldwide. Augusto Neri, Director of the Volcanoes Department of the INGV and co-author of the study, said: “The analysis of Stromboli’s data suggests the existence of a physical process that influences the recurrence of this volcano’s explosions, meaning they not completely random, out-of-the-blue events”. Statisticians describe such repeating sequences as ‘memory’ processes. “Understanding the reasons and physical mechanisms that determine this memory represents a further scientific challenge. But the estimation of the memory in episodes of intense explosive activity of Stromboli will make a significant contribution to the quantification of the likelihood of these dangerous phenomena and, consequently, to the reduction of associated risks”.

Willy Aspinall, Emeritus Professor in the School of Earth Sciences at Bristol, added: “Volcano tourism has grown substantially in recent years, and an unexpected eruption at a popular setting can be fatal, as happened last year at White Island/Whakaari volcano, New Zealand. Knowing that a particular volcano exhibits this eruption memory effect means any temporary increase in explosion probability can be appraised and, for example, inform decisions about volcanological fieldwork at the craters. However, it is premature at this stage to discuss possible implications of this research for wider aspects of civil protection on Stromboli.”

Link to the study: