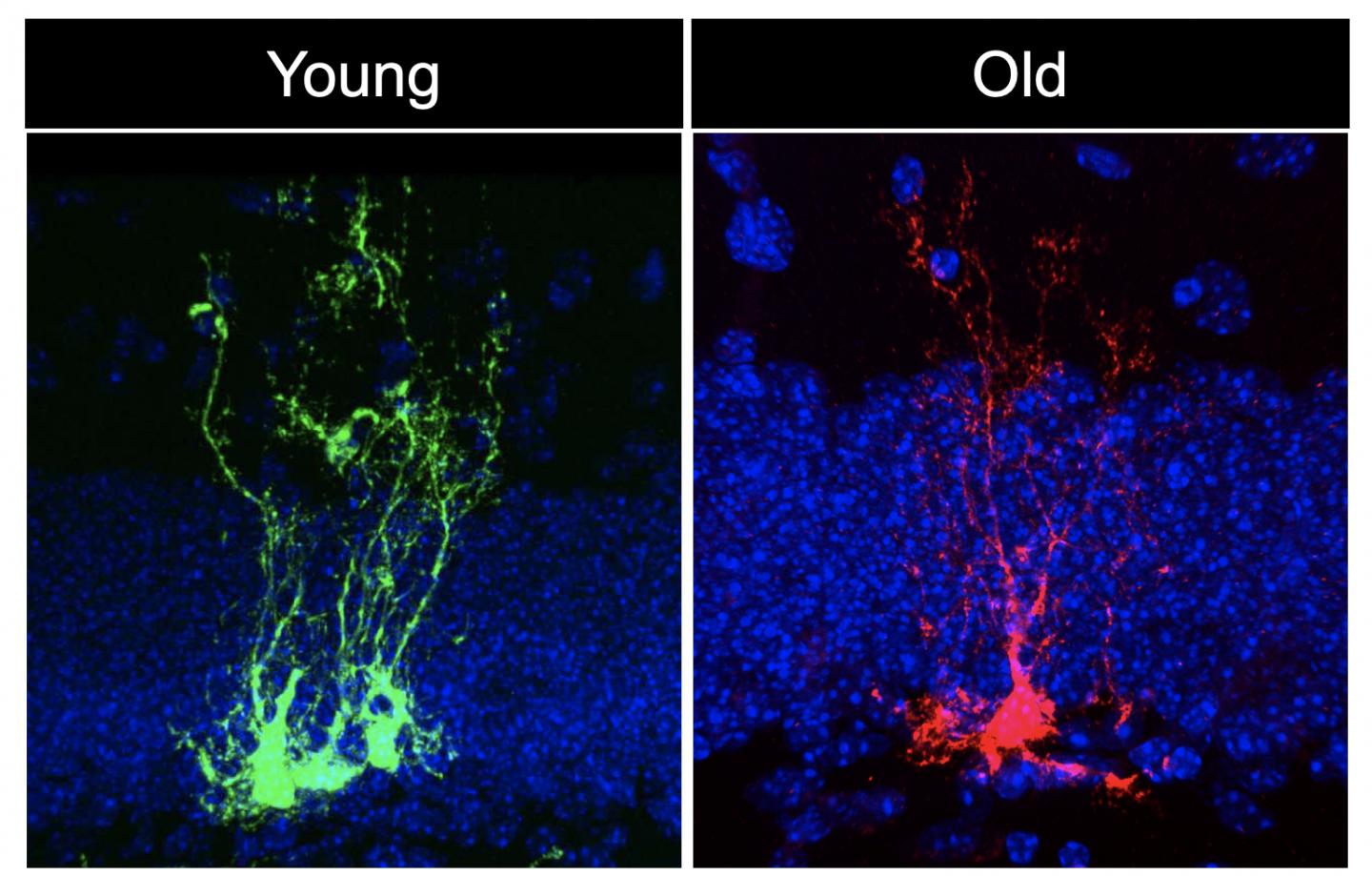 “There is chronological aging, and there is biological aging, and they are not the same thing,” said Bonaguidi, an Assistant Professor of Stem Cell Biology and Regenerative Medicine, Gerontology and Biomedical Engineering at the Keck School of Medicine of USC. “We’re interested in the biological aging of neural stem cells, which are particularly vulnerable to the ravages of time. This has implications for the normal cognitive decline that most of us experience as we grow older, as well as for dementia, Alzheimer’s disease, epilepsy and brain injury.”

In the study, first author Albina Ibrayeva, a PhD candidate in the Bonaguidi Lab in the Eli and Edythe Broad Center for Regenerative Medicine and Stem Cell Research at USC, joined her colleagues in looking at the brains of young, middle-aged and old mice.

By tracing individual neural stem cells, or NSCs, over the course of several months, they identified “short-term NSCs” that quickly differentiate into more specialized neurons, and “long-term NSCs” that continually divide and replicate themselves to maintain an ongoing reserve of stem cells with the ability to generate many different cell types in the brain. This key population of long-term NSCs divided less often and failed to maintain their numbers as the mice aged.

The scientists next examined thousands of genes in the long-term NSCs, which were dividing less often and had slipped into an inactive state known as quiescence. The gene activity of the quiescent NSCs varied greatly in young versus middle-aged animals. As expected, there were changes in genes that control how long-term NSCs divide, as well as generate new neurons and other brain cells. Remarkably, there were many important changes in gene activity related to biological aging at younger ages than anticipated. These pro-aging genes make it more difficult for cells to repair damage to their DNA, regulate their genetic activity, control inflammation and handle other stresses.

Among the pro-aging genes, the scientists were most intrigued by Abl1, which formed the hub of a network of interrelated genes.

“We were interested in the gene Abl1, because no one has ever studied its role in neural stem cell biology–whether in development or in aging,” said Ibrayeva.

“We’ve succeeded in getting neural stem cells to divide more without depleting, and that’s step one,” said Bonaguidi. “Step two will be to induce these stem cells to make more neurons. Step three will be to demonstrate that these additional neurons actually improve learning and memory. Much work remains to be done, but this study marks exciting progress towards our goal of identifying prescription drugs that could rejuvenate our brains as we grow older.”

Seventy percent of the research was supported by federal funding from the National Institutes of Health (R00NS080913, R56AG064077, R01AG0585560, and T32HD060549-08), and the remainder was supported by non-federal funding from the Donald E. and Delia B. Baxter Foundation, the L.K. Whittier Foundation, The Eli and Edythe Broad Foundation, the Children’s Hospital Los Angeles TSRI pilot program, a Royal Society E P Abraham Professorship (RPR1180165), the Wellcome Trust (098357/Z/12/Z), the American Federation for Aging Research Scholarship for Research in Biology of Aging and the USC Provost’s Research Enhancement Fellowship.

Founded in 1885, the Keck School of Medicine of USC is one of the nation’s leading medical institutions, known for innovative patient care, scientific discovery, education, and community service. Medical and graduate students work closely with world-renowned faculty and receive hands-on training in one of the nation’s most diverse communities. They participate in cutting-edge research as they develop into tomorrow’s health leaders. With more than 900 resident physicians across 50 specialty and subspecialty programs, the Keck School is the largest educator of physicians practicing in Southern California.