The organoids, which resemble a kidney’s uretic buds, provide a way to study kidney disease that could lead to new treatments and regenerative approaches for patients 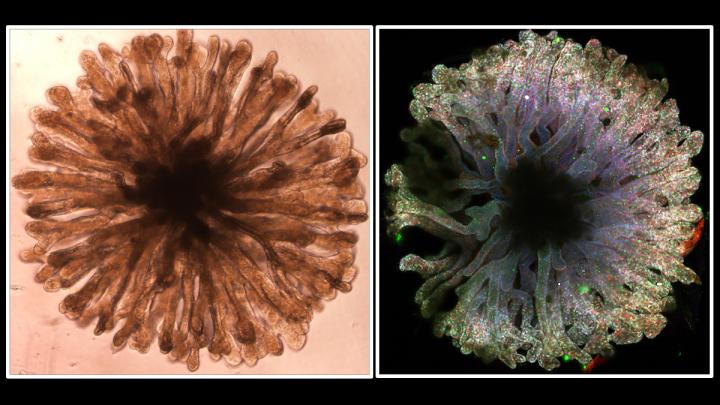 A team of scientists at the Keck School of Medicine of USC has created what could be a key building block for assembling a synthetic kidney. In a new study in Nature Communications, Zhongwei Li and his colleagues describe how they can generate rudimentary kidney structures, known as organoids, that resemble the collecting duct system that helps maintain the body’s fluid and pH balance by concentrating and transporting urine.

“Our progress in creating new types of kidney organoids provides powerful tools for not only understanding development and disease, but also finding new treatments and regenerative approaches for patients,” said Li, the study’s corresponding author and an assistant professor of medicine, and of stem cell biology and regenerative medicine.

The first authors of the study, PhD student Zipeng Zeng and postdoc Biao Huang, and the team started with a population of what are known as ureteric bud progenitor cells, or UPCs, that play an important role in early kidney development. Using first mouse and then human UPCs, the scientists were able to develop cocktails of molecules that encourage the cells to form organoids resembling uretic buds–the branching tubes that eventually give rise to the collecting duct system. The scientists also succeeded in finding a different cocktail to induce human stem cells to develop into ureteric bud organoids.

The human and mouse ureteric bud organoids can also be genetically engineered to harbor mutations that cause disease in patients, providing better models for understanding kidney problems, as well as for screening potential therapeutic drugs. As one example, the scientists knocked out a gene to create an organoid model of congenital anomalies of the kidney and urinary tract, known as CAKUT.

In addition to serving as models of disease, ureteric bud organoids could also prove to be an essential ingredient in the recipe for a synthetic kidney. To explore this possibility, the scientists combined mouse ureteric bud organoids with a second population of mouse cells: the progenitor cells that form nephrons, which are the filtering units of the kidney. After inserting the tip of a lab-grown ureteric bud into a clump of NPCs, the team observed the growth of an extensive network of branching tubes reminiscent of a collecting duct system, fused with rudimentary nephrons.

“Our engineered mouse kidney established a connection between nephron and collecting duct–an essential milestone towards building a functional organ in the future,” said Li.

Twenty percent of this work was supported by federal funding from the National Institute of Diabetes and Digestive and Kidney Diseases (grant DK054364 and F31 fellowship DK107216). The remainder of the support came from departmental startup funding, UKRO foundation support, a USC Stem Cell Challenge Award, and the California Institute for Regenerative Medicine (CIRM) Bridges Program.

Founded in 1885, the Keck School of Medicine of USC is one of the nation’s leading medical institutions, known for innovative patient care, scientific discovery, education, and community service. Medical and graduate students work closely with world-renowned faculty and receive hands-on training in one of the nation’s most diverse communities. They participate in cutting-edge research as they develop into tomorrow’s health leaders. With more than 900 resident physicians across 50 specialty and subspecialty programs, the Keck School is the largest educator of physicians practicing in Southern California.