US Department of Energy and Intel to deliver first exascale supercomputer 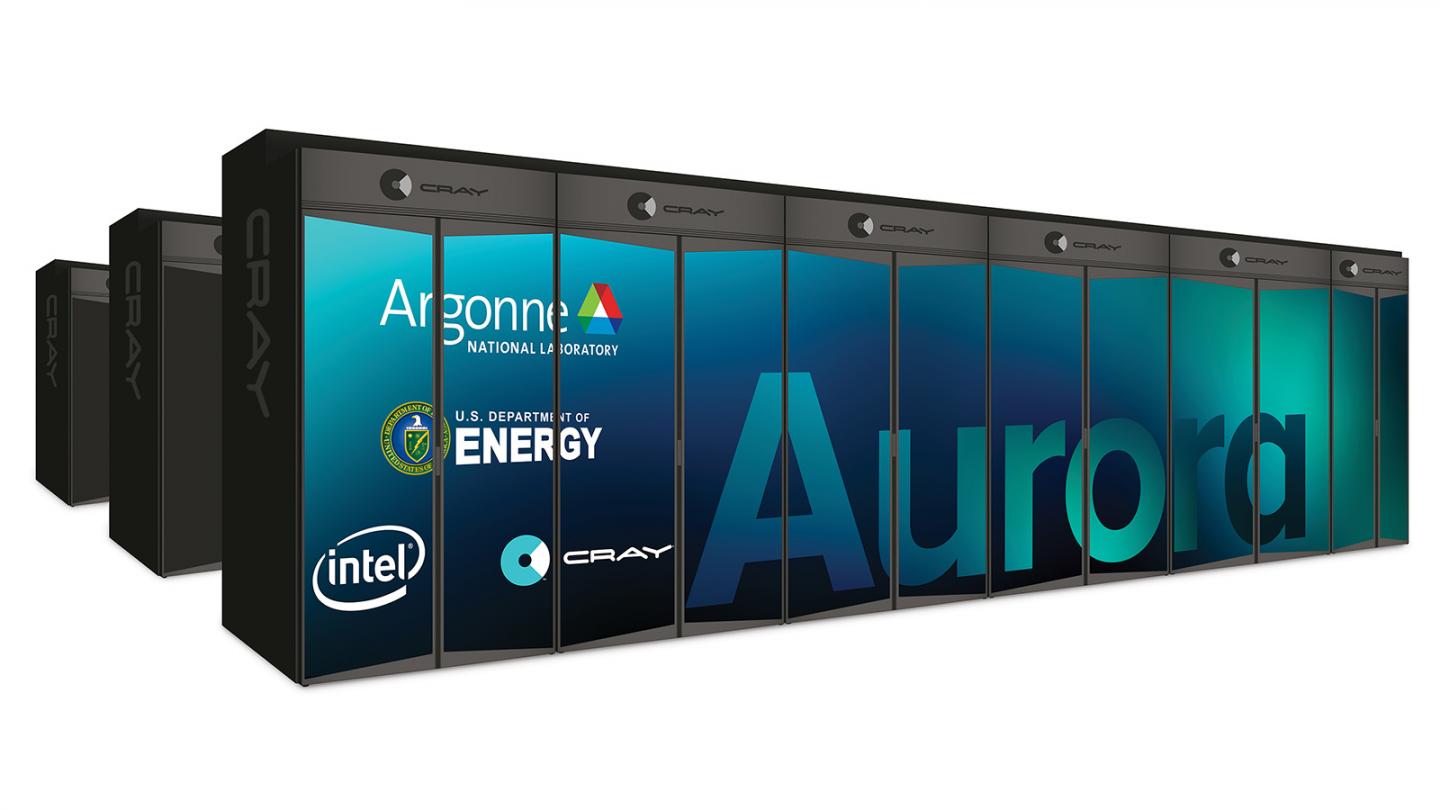 CHICAGO, ILLINOIS – Intel Corporation and the U.S. Department of Energy (DOE) will deliver the first supercomputer with a performance of one exaFLOP in the United States. The system being developed at DOE‘s Argonne National Laboratory* in Chicago — named “Aurora” — will be used to dramatically advance scientific research and discovery. The contract is valued at more than $500 million and will be delivered to Argonne National Laboratory by Intel and sub-contractor Cray, Inc.* in 2021.

The Aurora system’s exaFLOP of performance — equal to a “quintillion” floating point computations per second — combined with an ability to handle both traditional high-performance computing (HPC) and artificial intelligence (AI) will give researchers an unprecedented set of tools to address scientific problems at exascale. These breakthrough research projects range from developing extreme-scale cosmological simulations, to discovering new approaches for drug response prediction, to discovering materials for the creation of more efficient organic solar cells. The Aurora system will foster new scientific innovation and usher in new technological capabilities, furthering the United States’ scientific leadership position globally.

“Achieving exascale is imperative, not only to better the scientific community, but also to better the lives of everyday Americans,” said U.S. Secretary of Energy Rick Perry. “Aurora and the next generation of exascale supercomputers will apply HPC and AI technologies to areas such as cancer research, climate modeling and veterans’ health treatments. The innovative advancements that will be made with exascale will have an incredibly significant impact on our society.”

“Today is an important day not only for the team of technologists and scientists who have come together to build our first exascale computer — but also for all of us who are committed to American innovation and manufacturing,” said Bob Swan, Intel CEO.  “The convergence of AI and high-performance computing is an enormous opportunity to address some of the world’s biggest challenges and an important catalyst for economic opportunity.”

“Aurora and the next generation of exascale supercomputers will apply HPC and AItechnologies to areas such as cancer research, climate modeling and veterans’ health treatments. The innovative advancements that will be made with exascale will have an incredibly significant impact on our society.” — U.S. Secretary of Energy Rick Perry.

“There is tremendous scientific benefit to our nation that comes from collaborations like this one with the Department of Energy, Argonne National Laboratory, industry partners Intel and Cray and our close association with the University of Chicago,” said Argonne National Laboratory Director, Paul Kearns. “Argonne’s Aurora system is built for next-generation artificial intelligence and will accelerate scientific discovery by combining high-performance computing and artificial intelligence to address real world problems, such as improving extreme weather forecasting, accelerating medical treatments, mapping the human brain, developing new materials and further understanding the universe — and those are just the beginning.”

The foundation of the Aurora supercomputer will be new Intel technologies designed specifically for the convergence of artificial intelligence and high-performance computing at extreme computing scale. These include a future generation of Intel® Xeon® Scalable processor, Intel’s Xe compute architecture, a future generation of Intel® Optane™ DC Persistent Memory and Intel’s One APIsoftware. Aurora will use Cray’s next-generation supercomputer system, code-named “Shasta,” which will comprise more than 200 cabinets and include Cray’s Slingshot™ high-performance scalable interconnect and the Shasta software stack optimized for Intel architecture.

“Cray is proud to be partnering with Intel and Argonne to accelerate the pace of discovery and innovation across a broad range of disciplines,” said Peter Ungaro, president and CEO of Cray. “We are excited that Shasta will be the foundation for the upcoming exascale era, characterized by extreme performance capability, new data-centric workloads and heterogeneous computing.”

For more information about the work being done at DOE‘s Argonne National Laboratory, visit the website http://www.anl.gov.

Intel (NASDAQ: INTC), a leader in the semiconductor industry, is shaping the data-centric future with computing and communications technology that is the foundation of the world’s innovations. The company’s engineering expertise is helping address the world’s greatest challenges as well as helping secure, power and connect billions of devices and the infrastructure of the smart, connected world – from the cloud to the network to the edge and everything in between. Find more information about Intel at newsroom.intel.com and intel.com.

Intel and the Intel logo are trademarks of Intel Corporation in the United States and other countries.

*Other names and brands may be claimed as the property of others.

Cray Inc. (Nasdaq:CRAY) combines computation and creativity so visionaries can keep asking questions that challenge the limits of possibility. Drawing on more than 45 years of experience, Cray develops the world’s most advanced supercomputers, pushing the boundaries of performance, efficiency and scalability. Cray continues to innovate today at the convergence of data and discovery, offering a comprehensive portfolio of supercomputers, high-performance storage, data analytics and artificial intelligence solutions. Go to http://www.cray.com for more information.

Why is the brain disturbed by harsh sounds?