We are all exposed to nontuberculous mycobacteria (NTM), which are widely found in the environment, including the soil and water. They can even reside in our homes, for example in faucets and showerheads. But most of us don’t get sick, because our lungs are healthy and our immune systems strong. 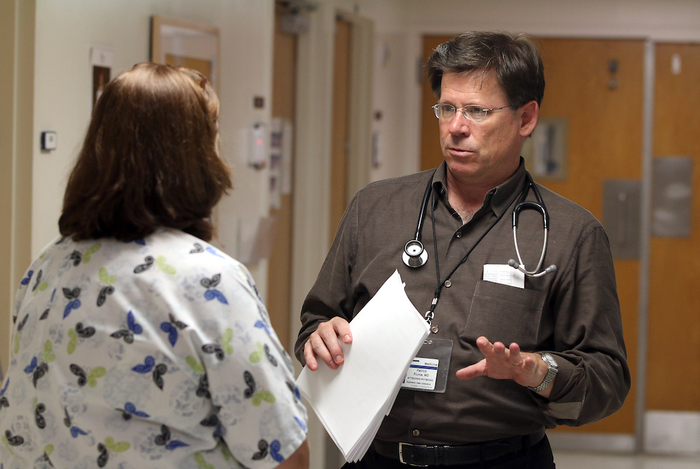 We are all exposed to nontuberculous mycobacteria (NTM), which are widely found in the environment, including the soil and water. They can even reside in our homes, for example in faucets and showerheads. But most of us don’t get sick, because our lungs are healthy and our immune systems strong.

The risk is greater for people with compromised immune systems or damaged airways due to asthma, cystic fibrosis or chronic obstructive pulmonary disease. Damaged lung tissue can be much more easily colonized by NTM bacteria. More than 80% of patients with NTM lung disease are infected by a particular strain known as Mycobacterium avium complex, or MAC. For reasons not well understood, postmenopausal women are also at higher risk of MAC infection.

Medical University of South Carolina pulmonologist Patrick Flume, M.D., first became interested in NTM lung disease when he noticed that as many as 15% of the patients he was seeing in his cystic fibrosis clinic had the disease. That led Flume, more than a decade ago, to start a monthly half-day clinic dedicated to these patients, one of the first in the nation. As NTM became more common, that clinic expanded and today runs weekly.

With the support of the South Carolina Clinical & Translational Research Institute’s Research NEXUS, Flume now runs NTM clinical trials to help to identify better therapies for these patients. He also works with NTM experts across the nation to improve our understanding of the disease and the burden it poses, both to patients and to the health care system.

Flume recently collaborated with Rebecca Prevots, Ph.D., of the National Institutes of Health to study Medicare claims data to determine the risk of hospitalization in patients with NTM who are 65 or older. The study, published in CHEST, confirmed what was already strongly suspected – that patients with NTM who have other lung diseases are more likely to be hospitalized. But it also showed for the first time that compared with their age- and sex-matched counterparts without the disease, patients with NTM lung disease were hospitalized 20% more often and a median of 257 days earlier.

Flume and Prevots hope that the study will draw attention to NTM lung disease and the importance of improving its management.

“Our study shows that we’re seeing a substantial burden on these patients and the health system as manifested by hospitalizations,” said Flume. “So, it just gives us more evidence that we need to try and be better at identifying these patients and treating them earlier and more effectively.”

“Knowing how often patients with this condition are hospitalized allows us to measure the economic and social impact of this condition on our communities and to advocate for early detection and better treatment as well as to further research on prevention strategies.” said Prevots.

Patients with NTM lung disease can go years without a diagnosis because their symptoms – lingering cough, fatigue, fever, weight loss and sweats – are not recognized or are attributed to different diseases.

“By the time they come to us with a diagnosis, they’ve often been treated multiple times with antibiotics for respiratory symptoms before they finally figure out they’ve got MAC,” said Flume.

Once diagnosed, patients are put on a regimen of three to four antibiotics for many months, during which time sputum is cultured again to see if the infection has been cleared. Even after infection clearance, patients continue on antibiotics for an additional year.

“So we try to get someone to culture negativity and then treat them for a year past that,” said Flume. “In the NTM clinical trials I run, we’re trying to figure out if there are better regimens or even shorter regimens.”

Flume is planning to team up with Prevots again on two new projects. Together with Stephane Meystre, M.D., Ph.D., of the Biomedical Informatics Center at MUSC, they will analyze data for patients with NTM lung disease taken from the electronic health record and will work to set up a national NTM lung disease patient registry, which will help researchers to learn more about the disease and develop more effective therapies.

Flume thinks that early diagnosis is key to a better quality of life for these patients and to reduced rates of hospitalization. He encourages physicians to consider NTM infection in patients, particularly patients with other lung diseases, who show symptoms, such as a lingering cough, fatigue and fever that do not improve with antibiotics.

“We’re trying to communicate to docs to at least put this in their thought process,” said Flume. “When your patient is having persistent respiratory symptoms, is it possible he or she could be having this type of infection? If we identify them earlier, then we can intervene earlier and make a difference in their lives.”

To learn more about the NTM care team at MUSC Health, schedule a visit or refer a patient, visit this website.

Founded in 1824 in Charleston, MUSC is home to the oldest medical school in the South as well as the state’s only integrated academic health sciences center, with a unique charge to serve the state through education, research and patient care. Each year, MUSC educates and trains more than 3,000 students and nearly 800 residents in six colleges: Dental Medicine, Graduate Studies, Health Professions, Medicine, Nursing and Pharmacy. MUSC brought in more than $271 million in biomedical research funds in fiscal year 2020, continuing to lead the state in obtaining National Institutes of Health funding, with more than $129.9 million. For information on academic programs, visit musc.edu.

MUSC and its affiliates have collective annual budgets of $4.6 billion. The more than 20,000 MUSC team members include world-class faculty, physicians, specialty providers and scientists who deliver groundbreaking education, research, technology and patient care.