The elements on the periodic table of elements are listed in ways that emphasize certain relationships. There are families, periods (the horizonal rows) and groups (the vertical columns). The elements within each of these groupings exhibit some commonalities. 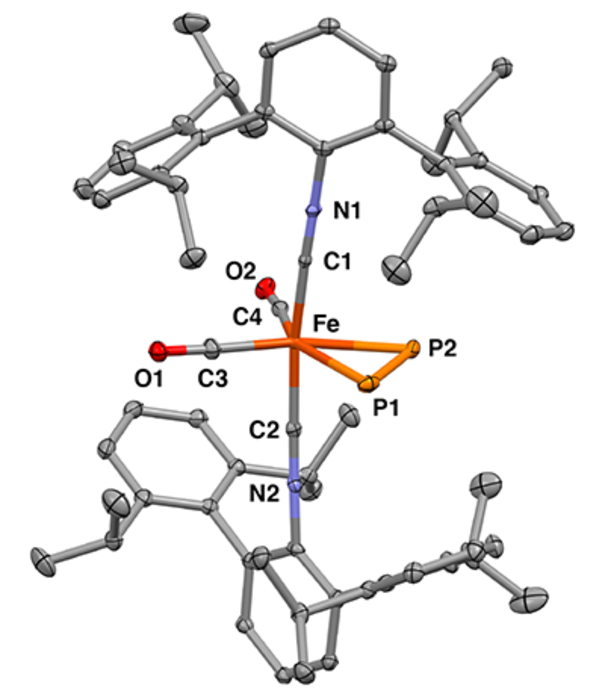 The elements on the periodic table of elements are listed in ways that emphasize certain relationships. There are families, periods (the horizonal rows) and groups (the vertical columns). The elements within each of these groupings exhibit some commonalities.

Diagonal relationships in the periodic table exist between two elements in diagonal positions to each other who exhibit similar chemical properties. Lithium and magnesium, boron and silicon, and carbon and phosphorus are all examples.

An iconic diagonal relationship has long been recognized between carbon and phosphorus, especially in cases where element-element multiple bonding is present, such as diphosphorus (P2) in which two phosphorus atoms are joined by a weak triple bond.

This diagonal relationship between phosphorus and carbon has set that expectation that the diphosphorus molecule should mimic the attributes of the hydrocarbon acetylene (C2H2). For instance, both diphosphorus and acetylene react with other organic molecules through their pi-bonds, a type of covalent bond found in molecules with multiple bonding.

A coordination complex consists of a central atom or ion that is usually metallic, and is surrounded by bound molecules or ions, known as ligands or complexing agents. Coordination complexes are vital to life on earth and include hemoglobin and chlorophyll. They are also used extensively in industrial applications as catalysts.

Diphosphorus—unlike acetylene—is highly unstable and reactive. When generated in free form, diphosphorus rapidly polymerizes or reacts with substrate molecules that are present. In other words, diphosphorus does not remain diphosphorus for long—its nature is to combine with other elements and molecules. This makes it difficult to study or manipulate.

Several synthetic routes have been established to form multinuclear diphosphorus complexes. The most popular method is by separating the tetrahedral P4 molecule, more commonly known as white phosphorus. However, white phosphorus is toxic and highly flammable (it was a main component in many incendiary bombs used in World War II).

“The work presented here provides a synthetic strategy to access mononuclear complexes of diphosphorus in laboratory settings,” stated UC San Diego Professor of Chemistry and Biochemistry Joshua Figueroa, principal investigator and co-author on the paper. “We anticipate that this coordination mode may further enable the development of selective phosphorus-atom transfer reactions to organic molecules.”

In designing the experiment, Figueroa and UC San Diego postdoctoral scholar Shuai Wang used iron as the metal ion because it provided a good coordination platform that allowed binding of small molecules in an efficient way. In binding diphosphorus to an iron ion, they were able to stitch together the two phosphorus atoms in a way that circumvented the free release of diphosphorus, providing much sought-after stability.

Wang, who is the first author on the paper and performed the synthetic work, said, “Considering the extreme sensitivity of the free diphosphorus molecule as a fleeting species, it is remarkable how stable it becomes upon coordinating to the sterically encumbered mononuclear iron center.”

Researchers used x-ray crystallography to determine the precise 3D structure of the molecules and Mossbauer spectroscopy to observe changes in the bonding interactions between the iron ion and the diphosphorus. This was a key technique because it allowed the researchers to show that diphosphorus and an acetylene molecule influenced the properties of the iron center in similar ways.

If diphosphorus can exist in a form that is relatively stable and selectively reactive, scientists will be able to attach it to substrates in something known as “click” chemistry. Click chemistry does not describe one single, specific reaction, but describes a way of generating substances by joining small modular units. This may open up new areas of discovery in synthetic chemistry for the preparation of pharmaceutical compounds.

“We are excited about this work because it demonstrates the importance of using fundamental concepts learned in first-year chemistry in guiding new discoveries,” said Figueroa.

Side-on coordination of diphosphorus to a mononuclear iron center