Unravelling the knotty problem of the Sun’s activity 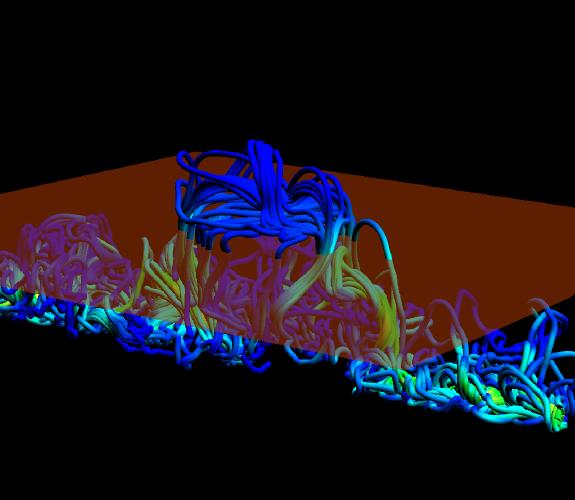 A new approach to analysing the development of magnetic tangles on the Sun has led to a breakthrough in a longstanding debate about how solar energy is injected into the solar atmosphere before being released into space, causing space weather events. The first direct evidence that field lines become knotted before they emerge at the visible surface of the Sun has implications for our ability to predict the behaviour of active regions and the nature of the solar interior. Dr Christopher Prior of the Department of Mathematical Sciences, Durham University, will present the work today at the virtual National Astronomy Meeting (NAM 2021).

Researchers are generally in agreement that solar activity is caused by instabilities in giant twists of magnetic ropes threading the visible surface of the Sun, known as the photosphere. However, there has been an ongoing debate about how these tangles form. The two dominant theories have suggested either that coils of field lines emerge through the photosphere from the convection zone below, or that the feet of arching field lines wrap around each other on the surface itself and create braids. Both mechanisms could theoretically produce effects like sunspot rotation and dramatic solar flares but, to date, no direct observational evidence had conclusively supported either scenario.

Prior and colleagues from the University of Glasgow and INAF-Osservatorio Astrofisico di Catania in Italy came up with a new direct measure of the entanglement of the magnetic field by tracking the rotation of field lines at the points where they intersect with the photosphere. This ‘magnetic winding’ should manifest in different ways for each of the two theories. Thus, applying magnetic winding to observations of the photosphere and examining the resulting patterns could enable a definitive answer to be reached for which theory was correct.

The researchers studied the magnetic winding for 10 active regions on the Sun in observations by solar missions. In every case, the results matched the emergence theory of pre-twisted magnetic field lines rising up from the convection zone.

Prior explains: “The pattern for pre-twisted field lines exactly matched the observational data we considered initially, and this has since been found to be true for all data sets of active regions we have looked at so far. We anticipate that magnetic winding will become a staple quantity in the interpretation of magnetic field structure from observational data.”