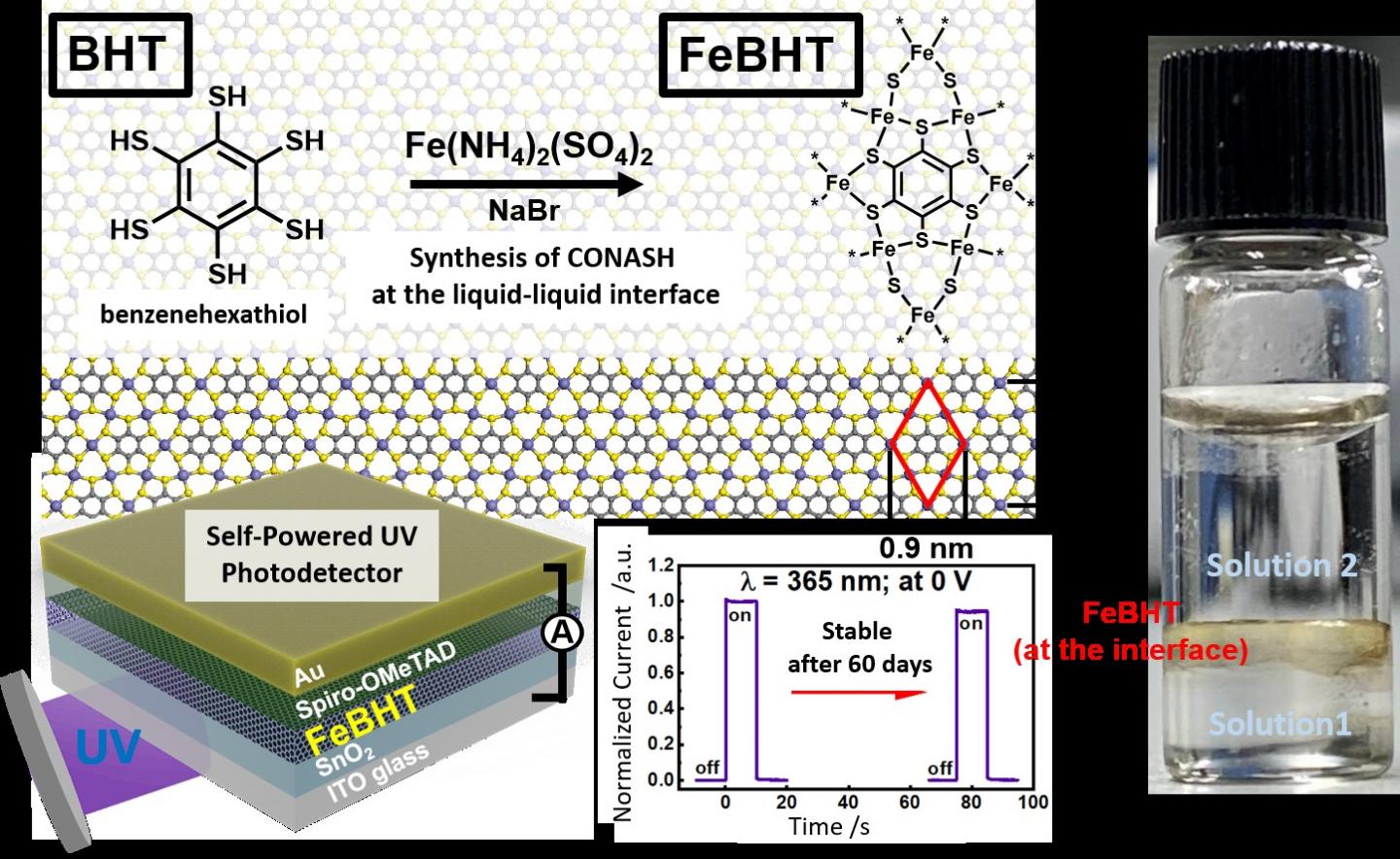 Converting light to electricity effectively has been one of the persistent goals of scientists in the field of optoelectronics. While improving the conversion efficiency is a challenge, several other requirements also need to be met. For instance, the material must conduct electricity well, have a short response time to changes in input (light intensity), and, most importantly, be stable under long-term exposure.

Lately, scientists have been fascinated with “coordination nanosheets” (CONASHs), that are organic-inorganic hybrid nanomaterials in which organic molecules are bonded to metal atoms in a 2D network. The interest in CONASHs stems mainly from their ability to absorb light at multiple wavelength ranges and convert them into electrons with greater efficiency than other types of nanosheets. This feat was observed in a CONASH comprising a zinc atom bonded with a porphyrin-dipyrrin molecule. Unfortunately, the CONASH quickly became corroded due to the low stability of organic molecules in liquid electrolytes (a medium commonly used for current conduction).

“The durability issue needs to be solved to realize the practical applications of CONASH-based photoelectric conversion systems,” says Prof. Hiroshi Nishihara from Tokyo University of Science (TUS), Japan, who conducts research on CONASH and has been trying to solve the CONASH stability problem.

Now, in a recent study published in Advanced Science as a result of a collaborative research between National Institute for Materials Science (NIMS), Japan and TUS, Prof. Nishihara and his colleagues, Dr. Hiroaki Maeda and Dr. Naoya Fukui from TUS, Dr. Ying-Chiao Wang and Dr. Kazuhito Tsukagoshi from NIMS, Mr. Chun-Hao Chiang and Prof. Chun-Wei Chen from National Taiwan University, Taiwan, and Dr. Chi-Ming Chang and Prof. Wen-Bin Jian from National Chiao-Tung University, Taiwan, have designed a CONASH comprising an iron (Fe) ion bonded to a benzene hexathiol (BHT) molecule that has demonstrated the highest stability under air exposure reported so far. The new FeBHT CONASH-based photodetector can retain over 94% of its photocurrent after 60 days of exposure! Moreover, the device requires no external power source.

What made such a feat possible? Put simply, the scientists made some smart choices. Firstly, they went for an all-solid architecture by replacing the liquid electrolyte with a solid-state layer of Spiro-OMeTAD, a material known to be an efficient transporter of “holes” (vacancies left behind by electrons). Secondly, they synthesized the FeBHT network from a reaction between iron ammonium sulfate and BHT, which accomplished two things: one, the reaction was slow enough to keep the sulfur group protected from being oxidized, and two, it helped the resultant FeBHT network become resilient to oxidation, as the scientists confirmed using density functional theory calculations.

In addition, the FeBHT CONASH favored high electrical conductivity, showed an enhanced photoresponse with a conversion efficiency of 6% (the highest efficiency previously reported was 2%), and a response time

With these results, the scientists are thrilled about the prospects of CONASH in commercialized optoelectronic applications. “The high performance of the CONASH-based photodetectors coupled with the fact that they are self-powered can pave the way for their practical applications such as in light-receiving sensors that can be used for mobile applications and recording the light exposure history of objects,” says Prof. Nishihara excitedly.

And his vision may not be too far from being realized!

Tokyo University of Science (TUS) is a well-known and respected university, and the largest science-specialized private research university in Japan, with four campuses in central Tokyo and its suburbs and in Hokkaido. Established in 1881, the university has continually contributed to Japan’s development in science through inculcating the love for science in researchers, technicians, and educators. With a mission of “Creating science and technology for the harmonious development of nature, human beings, and society”, TUS has undertaken a wide range of research from basic to applied science. TUS has embraced a multidisciplinary approach to research and undertaken intensive study in some of today’s most vital fields. TUS is a meritocracy where the best in science is recognized and nurtured. It is the only private university in Japan that has produced a Nobel Prize winner and the only private university in Asia to produce Nobel Prize winners within the natural sciences field.
Website: https://www.tus.ac.jp/en/mediarelations/

About Professor Hiroshi Nishihara from Tokyo University of Science

Hiroshi Nishihara is a Professor of Chemistry at The University of Tokyo and a faculty at Tokyo University of Science in Japan. He is a distinguished professor, researcher, and pioneer in the field of synthesis and electrochemistry of conductive metal complex polymers. His research is focused on creation of new electro- and photo-functional materials comprising both transition metals and π-conjugated chains, and invention of unidirectional electron transfer systems utilizing molecular layer interfaces. He has published 457 paper with over 13000 citations to his credit.