Carbon monoxide is an odorless and colorless gas made when fossil fuels burn incompletely. It’s also a silent killer. 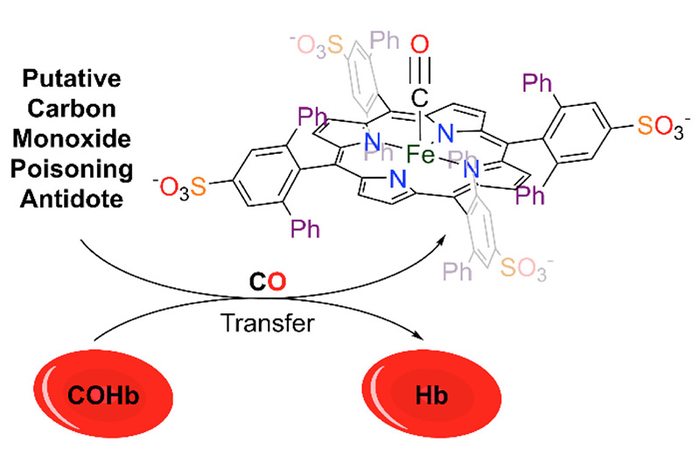 Carbon monoxide is an odorless and colorless gas made when fossil fuels burn incompletely. It’s also a silent killer.

According to the Centers for Disease Control (CDC), more than 400 deaths and 20,000 emergency room visits can be attributed to carbon monoxide (CO) poisoning every year. While CO detectors and making sure your fireplace and heaters work correctly can help prevent exposure, treatment options are limited for those suffering from CO poisoning.

That’s why Tim Johnstone, an assistant professor of chemistry and biochemistry at UC Santa Cruz, has been working to develop an easy-to-administer antidote.

“If you are exposed to carbon monoxide, the primary treatment right now is fresh air,” said Johnstone. “It is a question of time. In fresh air, you need four to six hours for the level of CO in your blood to be cut in half. With 100 percent oxygen or hyperbaric oxygen, the half-life shortens further. Even then, the high blood levels of CO can persist long enough to lead to long-term deficits and neurological problems.”

Johnstone has been studying the chemistry of carbon monoxide, which is made of one oxygen atom and one carbon atom joined by a triple bond. In a biological context, CO binds to metal centers like the iron in hemoglobin, which then prevents this protein from functioning as it normally would, transporting oxygen from the lungs to tissues in the rest of the body.

To mitigate this, Johnstone has designed small molecules that possess many of the features of the active site of hemoglobin but can bind CO much more tightly than the protein. In a recent paper published in Chemical Communications, his group described the ability of one such molecule to bind CO, sequester CO that is already bonded to hemoglobin, and rescue red blood cells exposed to CO, all promising signs for a future antidote.

Johnstone says these are early results, but the hope is to create a point-of-care treatment that can be administered quickly. The most common carbon monoxide poisoning symptoms are headache, dizziness, weakness, upset stomach, vomiting, chest pain, and confusion. Because it mimics the flu, people may experience symptoms without realizing the danger and delay seeking treatment.

Graduate student Daniel Droege has been the point person on this project and is first author of the paper.

In addition to the research on carbon monoxide poisoning, Johnstone’s Lab is also working on antimony-containing drugs used to treat the neglected tropical disease Leishmaniasis, developing novel arsenic-based anticancer agents, and discovering new main-group bonding motifs. His work has been supported by the Hellman Foundation, the National Science Foundation, and the University of California Cancer Research Coordinating Committee.