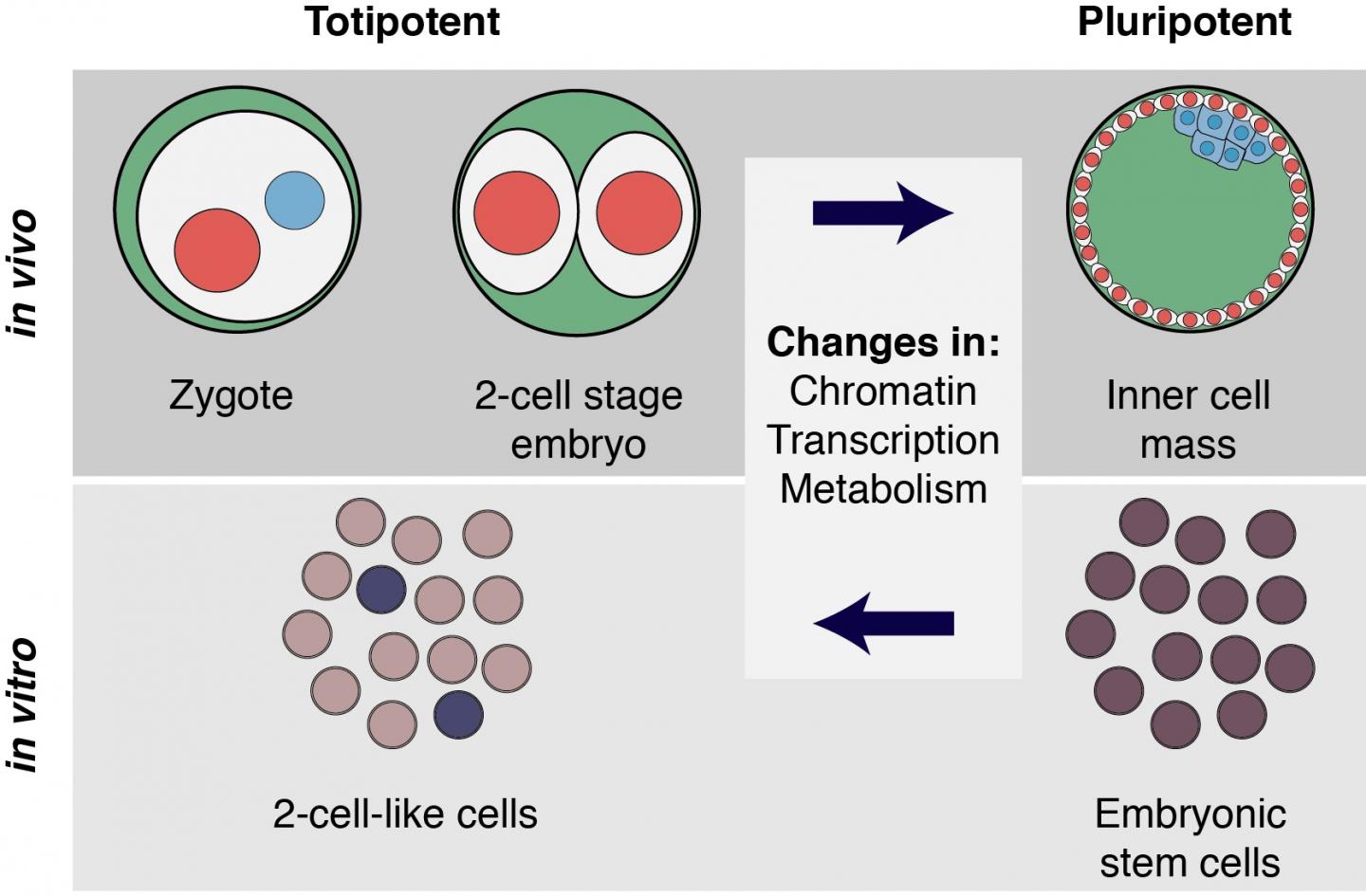 Totipotent cells own the highest differentiation potential of all cells. They can only be found shortly after fertilization in an early embryonic state and are capable of producing all cell types. Pluripotent cells, also called embryonic stem cells, on the contrary have lost some of this potential as they have already further developed. In order to be able re-program their initial totipotency, it is crucial to have a broad knowledge about the differences between pluripotent and totipotent cells as the elimination of these differences might lead to totipotency. One of the possible differences, which so far has not been investigated, is whether totipotent and pluripotent cells have different metabolic needs and activities.

To find an answer to this question, the researchers in a first step compared the gene expression of pluripotent and totipotent-like cells, which are also referred to as “2-cell-like cells”, in culture. They discovered differences in metabolic enzymes and regulators involved in glycolysis, TCA-cycle, electron transport and glutamine metabolism. To dig deeper into these differences, Diego Rodriguez-Terrones from the Institute of Epigenetics and Stem Cells and Götz Hartleben from the Institute for Diabetes and Cancer teamed up to be able to measure oxygen consumption in 2-cell like cells, which was thus far not possible. They found that totipotent-like cells consume different amounts of oxygen compared to pluripotent cells. In addition, they observed differences in mitochondria morphology and reactive oxygen species (ROS) levels between pluripotent and totipotent-like cells. These findings led to the hypothesis that by adding specific metabolites pluripotent cells could re-programmed in a way to induce totipotent-like cells. Indeed, after analyzing 20 different metabolites, the group successfully identified 3 metabolites which are shown for the first time to induce totipotent-like cells in culture.

“Totipotent-like cells are invaluable to gain more knowledge about cellular plasticity. With these manipulated cells, we might be able to study and recreate the molecular features of totipotency in vitro.

Also, they open up the possibility for us to study very early developmental events during mammalian embryogenesis,” says Rodriguez-Terrones. “In future, totipotent-like cells could be very important for cell replacement therapies. The ability to generate them efficiently with metabolites paves the way for further research and innovation.”

The study joined forces and expertise of the Institute of Epigenetics and Stem Cells and the Institute for Diabetes and Cancer at Helmholt Zentrum München. The hybrid collaboration made it possible to analyze the emergence of 2-cell-like cells in culture from another perspective. The work was partly funded by the Helmholtz Association and the German Research Council (CRC 1064)

BU researchers: Pornography is not a ‘public health crisis’