New results show how varying the recipe could bring these materials closer to commercialization. 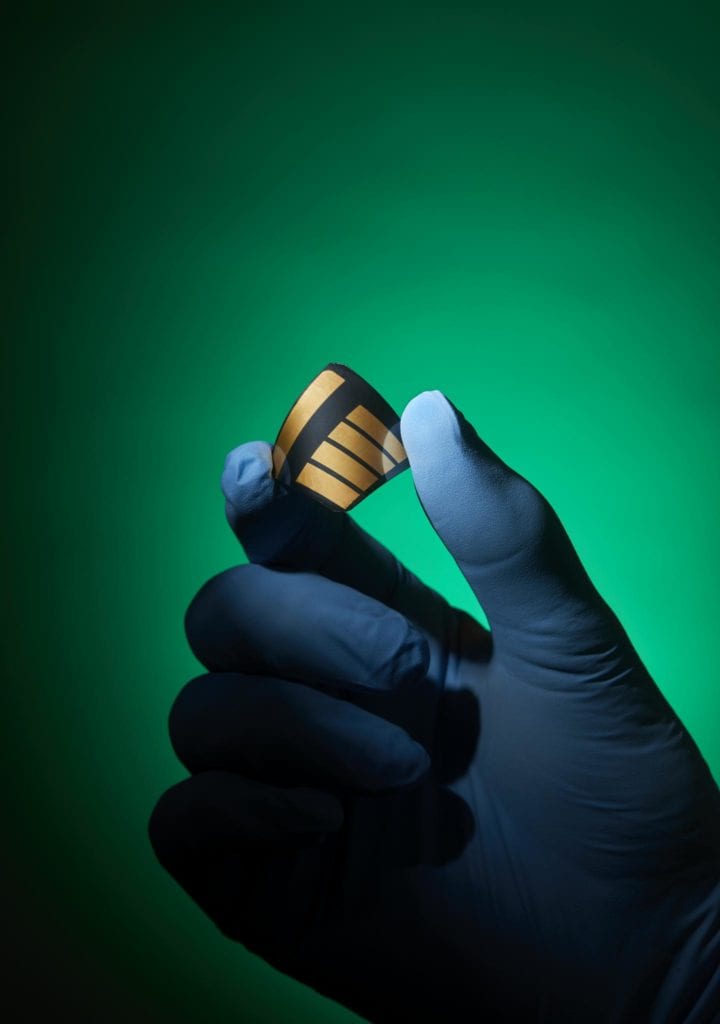 Perovskites — a broad category of compounds that share a certain crystal structure — have attracted a great deal of attention as potential new solar-cell materials because of their low cost, flexibility, and relatively easy manufacturing process. But much remains unknown about the details of their structure and the effects of substituting different metals or other elements within the material.

Conventional solar cells made of silicon must be processed at temperatures above 1,400 degrees Celsius, using expensive equipment that limits their potential for production scaleup. In contrast, perovskites can be processed in a liquid solution at temperatures as low as 100 degrees, using inexpensive equipment. What’s more, perovskites can be deposited on a variety of substrates, including flexible plastics, enabling a variety of new uses that would be impossible with thicker, stiffer silicon wafers.

Now, researchers have been able to decipher a key aspect of the behavior of perovskites made with different formulations: With certain additives there is a kind of “sweet spot” where greater amounts will enhance performance and beyond which further amounts begin to degrade it. The findings are detailed this week in the journal Science, in a paper by former MIT postdoc Juan-Pablo Correa-Baena, MIT professors Tonio Buonassisi and Moungi Bawendi, and 18 others at MIT, the University of California at San Diego, and other institutions.

Perovskites are a family of compounds that share a three-part crystal structure. Each part can be made from any of a number of different elements or compounds — leading to a very broad range of possible formulations. Buonassisi compares designing a new perovskite to ordering from a menu, picking one (or more) from each of column A, column B, and (by convention) column X. “You can mix and match,” he says, but until now all the variations could only be studied by trial and error, since researchers had no basic understanding of what was going on in the material.

In previous research by a team from the Swiss École Polytechnique Fédérale de Lausanne, in which Correa-Baena participated, had found that adding certain alkali metals to the perovskite mix could improve the material’s efficiency at converting solar energy to electricity, from about 19 percent to about 22 percent. But at the time there was no explanation for this improvement, and no understanding of exactly what these metals were doing inside the compound. “Very little was known about how the microstructure affects the performance,” Buonassisi says.

Now, detailed mapping using high-resolution synchrotron nano-X-ray fluorescence measurements, which can probe the material with a beam just one-thousandth the width of a hair, has revealed the details of the process, with potential clues for how to improve the material’s performance even further.

It turns out that adding these alkali metals, such as cesium or rubidium, to the perovskite compound helps some of the other constituents to mix together more smoothly. As the team describes it, these additives help to “homogenize” the mixture, making it conduct electricity more easily and thus improving its efficiency as a solar cell. But, they found, that only works up to a certain point. Beyond a certain concentration, these added metals clump together, forming regions that interfere with the material’s conductivity and partly counteract the initial advantage. In between, for any given formulation of these complex compounds, is the sweet spot that provides the best performance, they found.

“It’s a big finding,” says Correa-Baena, who in January became an assistant professor of materials science and engineering at Georgia Tech. What the researchers found, after about three years of work at MIT and with collaborators at UCSD, was “what happens when you add those alkali metals, and why the performance improves.” They were able to directly observe the changes in the composition of the material, and reveal, among other things, these countervailing effects of homogenizing and clumping.

“The idea is that, based on these findings, we now know we should be looking into similar systems, in terms of adding alkali metals or other metals,” or varying other parts of the recipe, Correa-Baena says. While perovskites can have major benefits over conventional silicon solar cells, especially in terms of the low cost of setting up factories to produce them, they still require further work to boost their overall efficiency and improve their longevity, which lags significantly behind that of silicon cells.

Although the researchers have clarified the structural changes that take place in the perovskite material when adding different metals, and the resulting changes in performance, “we still don’t understand the chemistry behind this,” Correa-Baena says. That’s the subject of ongoing research by the team. The theoretical maximum efficiency of these perovskite solar cells is about 31 percent, according to Correa-Baena, and the best performance to date is around 23 percent, so there remains a significant margin for potential improvement.

Although it may take years for perovskites to realize their full potential, at least two companies are already in the process of setting up production lines, and they expect to begin selling their first modules within the next year or so. Some of these are small, transparent and colorful solar cells designed to be integrated into a building’s façade. “It’s already happening,” Correa-Baena says, “but there’s still work to do in making these more durable.”

Once issues of large-scale manufacturability, efficiency, and durability are addressed, Buonassisi says, perovskites could become a major player in the renewable energy industry. “If they succeed in making sustainable, high-efficiency modules while preserving the low cost of the manufacturing, that could be game-changing,” he says. “It could allow expansion of solar power much faster than we’ve seen.”

The study, which included researchers at Purdue University and Argonne National Laboratory, in addition to those at MIT and UCSD, was supported by the U.S. Department of Energy, the National Science Foundation, the Skolkovo Institute of Science and Technology, and the California Energy Commission.