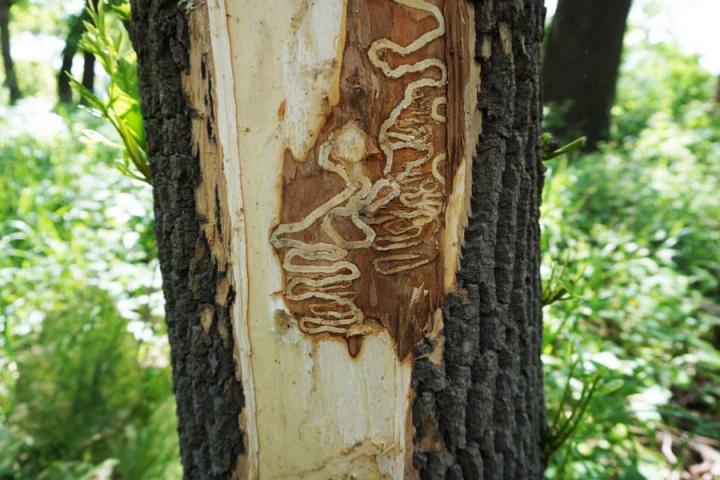 In a recent study published in Fungal Biology, MITPPC researchers identified various fungi living in EAB-infested trees — a critical first step in finding fungi that may be harnessed to control the spread of EAB, and ultimately, prevent ash tree death.

“We discovered that several different species of fungi attack EAB and other insects, and they can now be further tested for their potential for biocontrol,” said Robert Blanchette, the study’s project leader and professor in the College of Food, Agricultural and Natural Resource Sciences. “This is a very important first step in the search for a biocontrol for emerald ash borer.”

Larval EAB feed just beneath the bark, leaving behind tunnel galleries that can stretch up to 20 inches long. Beneath the surface, fungi — some of which may be capable of parasitizing the EAB — may be carried by the larvae as they develop, or may enter the tree through the tunnel galleries. Some of these fungi also seriously affect urban trees, causing rapid wood decay which result in hazardous tree situations.

From Rochester to Duluth, researchers gathered samples where ash is affected by EAB. Through DNA sequencing, scientists identified fungal isolates and revealed a diverse assemblage of fungi. This included entomopathogenic fungi that attack insects, as well as other fungi that cause cankers — which help EAB kill trees — and some that cause wood decay.

“Before now, we simply haven’t been sure what fungi are associated with EAB infestations in Minnesota. This project identified those species and, in doing so, opened up new possibilities for managing one of our state’s most devastating tree pests,” said Ben Held, the study’s lead author and researcher in the College of Food, Agricultural and Natural Resource Sciences.

As research continues, the scientists will build on the work from this study to determine if any of the fungi can be used to kill the emerald ash borer. Results will also be of value in helping control the insect in other parts of North America where EAB is found.

The research was funded through the Minnesota Environment and Natural Resources Trust Fund.