LEXINGTON, Ky. (Feb. 2, 2022) – A team of researchers from the University of Kentucky’s Sanders-Brown Center on Aging (SBCoA) is working to identify new proteins that are destructive to the brain. They know that about 25% of individuals, and 50% of individuals with Alzheimer disease, have the genetic mutation APOE ε4 allele — a known risk factor for the disease. 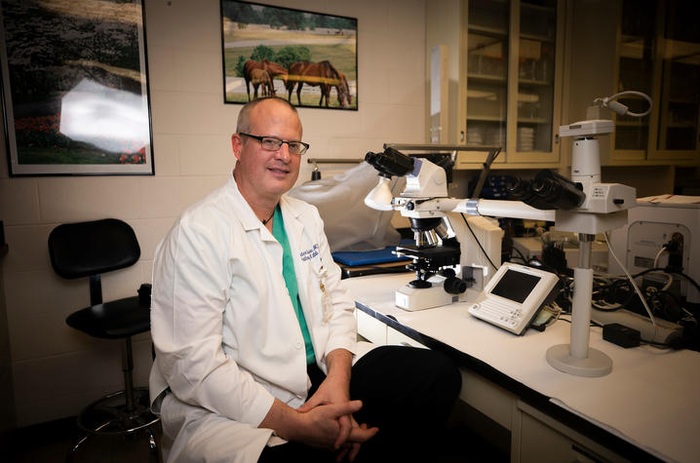 LEXINGTON, Ky. (Feb. 2, 2022) – A team of researchers from the University of Kentucky’s Sanders-Brown Center on Aging (SBCoA) is working to identify new proteins that are destructive to the brain. They know that about 25% of individuals, and 50% of individuals with Alzheimer disease, have the genetic mutation APOE ε4 allele — a known risk factor for the disease.

Through a recent study, researchers were surprised to find that even in the brains of patients without the disease-driving mutation, ApoE proteins were enhanced in dementia. Their findings appear in The American Journal of Pathology, published by Elsevier.

“Dementia is very complex, but you can simplify it: the disease is caused by ‘gloppy proteins’ in the brain,” said lead investigator Peter T. Nelson, M.D., Ph.D., director of neuropathology at SBCoA and a professor in UK’s Department of Pathology. “I’m not making light of it; these ‘sticky’ misfolded proteins often end up destroying the brain, the mind, the memories and everything else for millions of people who suffer from dementia. We want to understand specifically which proteins are the problem.”

The investigators looked at 40 participants from the University of Kentucky Alzheimer’s Disease Center autopsy cohort — Kentucky residents who have agreed to donate their brains at time of death. The subjects ranged from cognitively normal to severe dementia. Although previous studies have examined the human amygdala proteome, none have reported on a sample of this size with dementia subjects and control subjects for comparison.

“Like many big stories in science, it is not entirely novel. Other researchers have produced similar results,” said Nelson. “However, this finding strongly underscores the potential for ApoE to promote dementia, even in persons that don’t carry the ‘bad’ gene.”

The data revealed a close correlation between dementia diagnosis and the detection of ApoE peptides in the brain. The correlation with dementia for ApoE was even stronger than that seen for Tau, Aβ, or α-Synuclein. Researchers found that the ApoE peptides were significantly enriched even in dementia patients who lack the APOE ε4 allele. The results emphasize the ApoE protein may play an active disease-driving role in its own right, rather than just being an “upstream” genetic risk factor.

“Our study adds to an evolving appreciation of multiple misfolded proteins in the human brain and moves the field forward by emphasizing that ApoE may be a stong contributor to the dementia prototype, even in individuals who do not have the disease-driving version of the APOE gene,” said Nelson. “Even in persons lacking the APOE ε4 allele, ApoE may indeed be among the most impactful ‘gloppy proteins’ in aging brains.”

This material is based upon work supported by the Department of Veterans Affairs, Veterans Health Administration, Office of Research and Development, Biomedical Laboratory Research and Development. The views expressed in this article are those of the authors and do not necessarily reflect the position or policy of the Department of Veterans Affairs or the United States government.