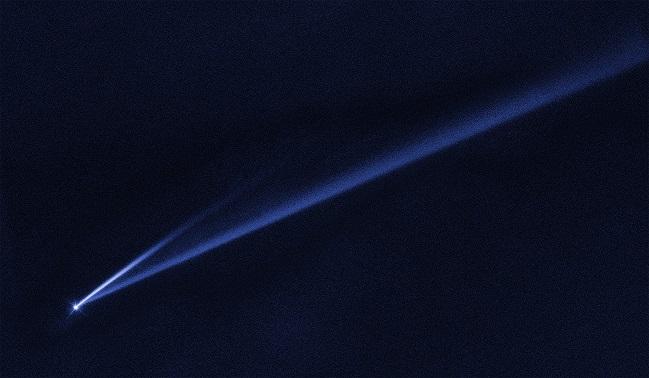 Astronomers once thought asteroids were boring, wayward space rocks that simply orbit around the sun. Only in science fiction movies were they dramatic, changing objects.

New observations are turning science fiction into science fact, showing that asteroids are anything but dull. Asteroid Gault, discovered in 1998, has begun to slowly disintegrate. The crumbling was first detected earlier this year on January 5, by the University of Hawaii at Manoa Institute for Astronomy (IfA) Asteroid Terrestrial-Impact Last Alert System (ATLAS) telescopes on Mauna Loa and Haleakala. Later investigation proved there were no asteroid collisions.

“Each night the ATLAS survey scans the sky looking for hazardous near-Earth asteroids, and we also observe tens of thousands of known asteroids in the main asteroid belt,” said Larry Denneau, an ATLAS project scientist. “Our collaborator Ken Smith in Belfast, Ireland, found an unusual looking moving object, and he alerted us that it might be a new comet. Instead, it turned out to be an asteroid in the main belt that just developed a comet-like tail. These events are rare and mysterious, and we were lucky to detect the event right after its turn-on.”

Gault is a well-known asteroid and the newly found tails are the first evidence of any misbehavior. These new observations suggest that asteroids are dynamic, active worlds that can ultimately disintegrate due to the long-term subtle effect of sunlight, which can slowly spin them up until they begin to shed material.

Astronomers estimate that this type of event is rare, occurring roughly once a year among the 800,000 known asteroids between Mars and Jupiter. That’s why only the latest astronomical surveys–like ATLAS–that map vast swaths of the sky nightly, can catch asteroids as they fall apart.

“Asteroids such as Gault cannot escape detection anymore,” noted Olivier Hainaut, a member of the observing team of the European Southern Observatory in Garching, Germany. “That means that all these asteroids that start misbehaving get caught.”

Once the new tail was discovered, Denneau and IfA colleague Robert Weryk looked back into archival data from ATLAS and the UH Panoramic Survey Telescope and Rapid Response System (Pan-STARRS) telescopes. The tail also turned up in data taken as far back as December 2018. In mid-January, a second shorter tail was detected by IfA astronomer Jan Kleyna using the Canada France Hawai`i Telescope (CFHT), as well as by other observers.

An analysis of both tails suggests the two dust releases occurred last year around October 28 and December 30.

Tantalized by this new discovery, IfA astronomers Kleyna and Karen Meech, along with colleagues worldwide, began to observe Gault with telescopes around the world and in space. Spectacular images of asteroid 6478 Gault from NASA’s Hubble Space Telescope show two narrow, comet-like tails of debris streaming from the 2.5-mile-wide asteroid. The tails are telltale evidence that Gault is beginning to come apart by gently puffing off material in two separate episodes over the past several months.

Gault is only the second asteroid uncovered whose disintegration is decisively linked to a spin-up process, known as a YORP (Yarkovsky-O’Keefe-Radzievskii-Paddack) torque. When sunlight heats an asteroid, infrared radiation escaping from its warmed surface carries off momentum as well as heat. This creates a tiny force that can cause the asteroid to spin faster and faster. If this centrifugal force overcomes gravity, the surface becomes unstable, and landslides send dust and rubble drifting into space.

Watching an asteroid come unglued by this natural process gives astronomers the opportunity to study the makeup of these space rocks without sending a spacecraft to sample them. Analyzing an asteroid’s ingredients as they are spread out into space offers a glimpse into planet formation in the early solar system.

“We didn’t have to visit Gault,” explained Olivier Hainaut of the European Southern Observatory in Garching, Germany, a member of the observing team. “We just had to look at the image of the streamers, and we can see all of the dust grains sorted neatly by size. All the large grains (about the size of sand particles) are close to the object and the smallest grains (about the size of flour) are the farthest away, because they are being pushed fastest by pressure from sunlight.”

For astronomers, piecing together Gault’s recent volatile activity is an astronomical forensics investigation, involving telescopes and astronomers from around the world. The first clue was the accidental detection of the first debris tail.

Follow-up observations with the William Herschel Telescope and ESA Optical Ground Station in La Palma and Tenerife, and the Himalayan Chandra Telescope in India, measured a two-hour rotation period for the object, close to the critical speed at which a loose “rubble-pile” asteroid begins to break up. “Gault is the best ‘smoking-gun’ example of a fast rotator right at the two-hour limit,” Kleyna said.

But the seeds to this self-destruction may have been sown 100 million years ago, a time when the dinosaurs roamed Earth. Pressure from sunlight slowly began spinning up the tiny asteroid at an estimated rate of 1 second every 10,000 years.

“It could have been on the brink of instability for 10 million years,” Kleyna said. “Even a tiny disturbance, like a small impact from a pebble, might have triggered the recent outbursts.”

The researchers suggest that as the asteroid rotated ever faster, destabilized material began cascading toward the equator. When the rotation rate reached a critical point, landslides sent debris drifting off into space at a few miles per hour, or the speed of a strolling human. Gault’s weak surface gravity couldn’t hold it any longer. The gentle process was like scattering powdered sugar into the air, where wind – or, in the case of Gault, sunlight – stretches it into a long streamer.

An analysis of the asteroid’s immediate neighborhood by Hubble revealed no signs of excess dust, which rules out the possibility of a collision with another asteroid causing the outbursts.

Hubble’s sharp imaging also reveals that the tails are narrow streamers, indicating that the dust was released in short bursts, lasting anywhere from a few hours to a few days. These sudden events puffed away enough debris to make a “dirt ball” approximately 500 feet across if compacted together. The tails will begin fading away in a few months as the dust disperses into interplanetary space.

Based on observations by the Canada-France-Hawaii telescope in Hawaii, the astronomers estimated that the longer tail stretches over half a million miles and is roughly 3,000 miles wide. The shorter tail is about a quarter as long.

Added Kleyna, “If the dust cloud lasts a couple of months, and the surveys see things once a month, we will see them. But if traditional observers are looking every couple of years, they’ll miss these events.”

The team said that this discovery shows the synergy between all-sky surveys such as ATLAS and Pan-STARRS, ground based telescopes and space-based facilities like the Hubble Space Telescope. This discovery would have been impossible without contributions from all three.

The researchers hope to monitor Gault for more dust events.

The team’s results have been accepted for publication and will appear in the Astrophysical Journal Letters. The NASA-funded ATLAS program is described at http://atlas.fallingstar.com.

The secret strength of gnashing teeth

Scienmag Sep 11, 2019
Credit: Susanta Ghosh/Michigan Tech The strength of teeth is told on the scale of millimeters. Porcelain…