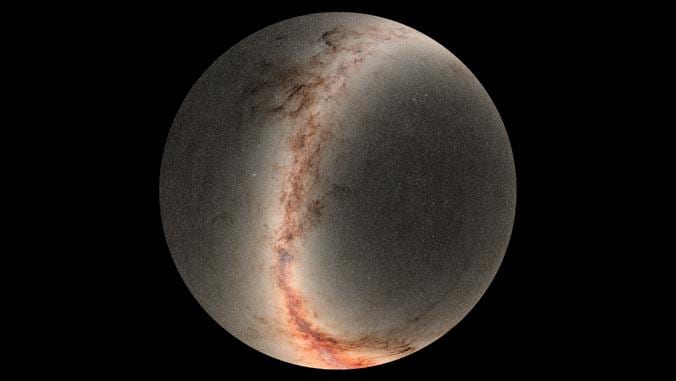 The University of Hawai’i at Manoa Institute for Astronomy (IfA), in conjunction with the Space Telescope Science Institute (STScI) in Baltimore, Maryland, is releasing the second edition of data from Pan-STARRS–the Panoramic Survey Telescope and Rapid Response System–the world’s largest digital sky survey.

This second release contains more than 1.6 petabytes of data, making it the largest volume of astronomical information ever released. The amount of imaging data is equivalent to two billion selfies or 30,000 times the total text content of Wikipedia. The catalog data is 15 times the volume of the Library of Congress.

“Pan-STARRS DR2 (Data Release 2) represents a vast quantity of astronomical data, with many great discoveries already unveiled,” said Heather Flewelling, IfA researcher and a key designer of the PS1 (Pan-STARRS1) database. “These discoveries just barely scratch the surface of what is possible, however, and the astronomy community will now be able to dig deep, mine the data and find the astronomical treasures within that we have not even begun to imagine.”

The Pan-STARRS observatory consists of a 1.8-meter telescope equipped with a 1.4 billion pixel digital camera, located at the summit of Haleakala on Maui. Conceived and developed by IfA, it embarked on a digital survey of the sky in visible and near-infrared light in May 2010.

Pan-STARRS was the first survey to observe the entire sky visible from Hawai’i multiple times in many colors of light. One of the survey’s goals was to identify moving, transient, and variable objects, including asteroids that could potentially threaten the Earth. The survey took approximately four years to complete, scanning the sky 12 times in five filters.

This second data release provides, for the first time, access to all of the individual exposures during different period of time. Astronomers and public users of the archive to search the full survey for high-energy explosive events in the cosmos, discover moving objects in our own solar system, and explore the time domain of the universe.

The Pan-STARRS1 Surveys and its science archive have been made possible through contributions by the Institute for Astronomy, the University of Hawai?i, the Pan-STARRS Project Office, the Max-Planck Society and its participating institutes, the Max Planck Institute for Astronomy, Heidelberg and the Max Planck Institute for Extraterrestrial Physics, Garching, the Johns Hopkins University, Durham University, the University of Edinburgh, the Queen’s University Belfast, the Center for Astrophysics | Harvard and Smithsonian (CfA), the Las Cumbres Observatory Global Telescope Network Incorporated, the National Central University of Taiwan, the Space Telescope Science Institute, and the National Aeronautics and Space Administration under Grant No. NNX08AR22G issued through the Planetary Science Division of the NASA Science Mission Directorate, the National Science Foundation Grant No. AST-1238877, the University of Maryland, Eötvös Loránd University (ELTE), the Los Alamos National Laboratory, and the Gordon and Betty Moore Foundation.

Many suffering children in Somaliland need surgery, but most of those needs go unmet

EASI Genomics: A project to provide free-of-charge access to sequencing…

Scienmag Mar 25, 2019
New project in the field of genomicsCredit: © CRG 2019. All rights reserved The European Advanced…