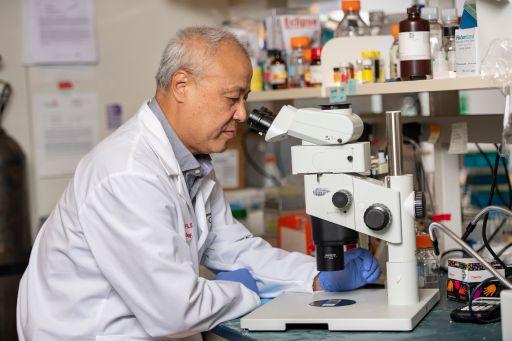 As the next step in finding a potential targeted treatment for pancreatic cancer, researchers at the University of Cincinnati are publishing a new study revealing how a combination therapy may improve outcomes for patients with this disease.

The study, led by graduate research assistant Kombo N’Guessan, PhD, and Xiaoyang Qi, PhD, professor in the Division of Hematology Oncology at the UC College of Medicine, will be published in the June 8 online edition of the journal Molecular Therapy.

“These research findings will help us lead a clinical trial with a combination therapeutic approach to treat pancreatic cancer patients,” says Qi, corresponding author on the paper and a member of the UC Cancer Center.

Researchers in this study have found that using a therapeutic compound, called SapC-DOPS, a nanovesicle (or a nanotechnology drug delivery system) made of microscopic components of a cell, to deliver a combined biomarker target therapy and standard chemotherapy for pancreatic cancer may show benefit to patients.

“Only a small number of promising drugs target pancreatic cancer, which is the fourth-leading cause of cancer deaths, with a five-year survival of less than six percent,” Qi says. “Pancreatic cancer is usually asymptomatic in the early stages, while frequently invading lymph nodes and the liver, and less often the lungs and visceral organs. Current treatments, including surgery, chemotherapy and radiation therapy, have failed to improve long-term survival.

“We’ve discovered a drug-targetable biomarker (phosphatidylserine) for pancreatic cancer cells in previous studies, and one of the first line treatments for advanced pancreatic cancer is chemotherapy, but it only provides marginal improvements for patients. We wanted to see if we could use the current first line treatment in combination with the novel nanovesicle drug delivery to improve outcomes.”

In the early 2000s, Qi developed SapC-DOPS, a combination of a cell protein, SapC, and a phospholipid, DOPS, that assembled into tiny cavities can selectively target cells and deliver therapies while sparing all other unaffected cells and tissues. In the past, he has studied that nanovesicle in cancer animal models looking at brain, lung, skin, prostate, blood, breast and pancreatic cancers. It is currently being studied in clinical trials for brain cancers.

In this study, researchers used both animal models and human cancer cells to test this theory and found that the combination of these therapies together helped to target the biomarker on cancer cell surface at various points in their life cycle, ultimately inhibiting tumor growth and potentially increasing survival, in comparison to the treatments alone.

“This study shows that the combination treatment using the nanovesicles and a standard chemotherapy could be beneficial for patients with pancreatic cancer, possibly extending lives and helping a subset of patients with cancer that don’t have many options,” Qi says.

This research was funded by the Give Hope Foundation and Bearcats Against Cancer and the UC College of Medicine. Partial support was provided by the National Institutes of Health (R01CA190717 and T32CA236764).

Qi is listed as an inventor on the patent for SapC-DOPS technology that is the subject of this research. The development and commercialization of this technology has been licensed to Bexion Pharmaceuticals in which Qi holds a minor (less than 5%) equity interest.