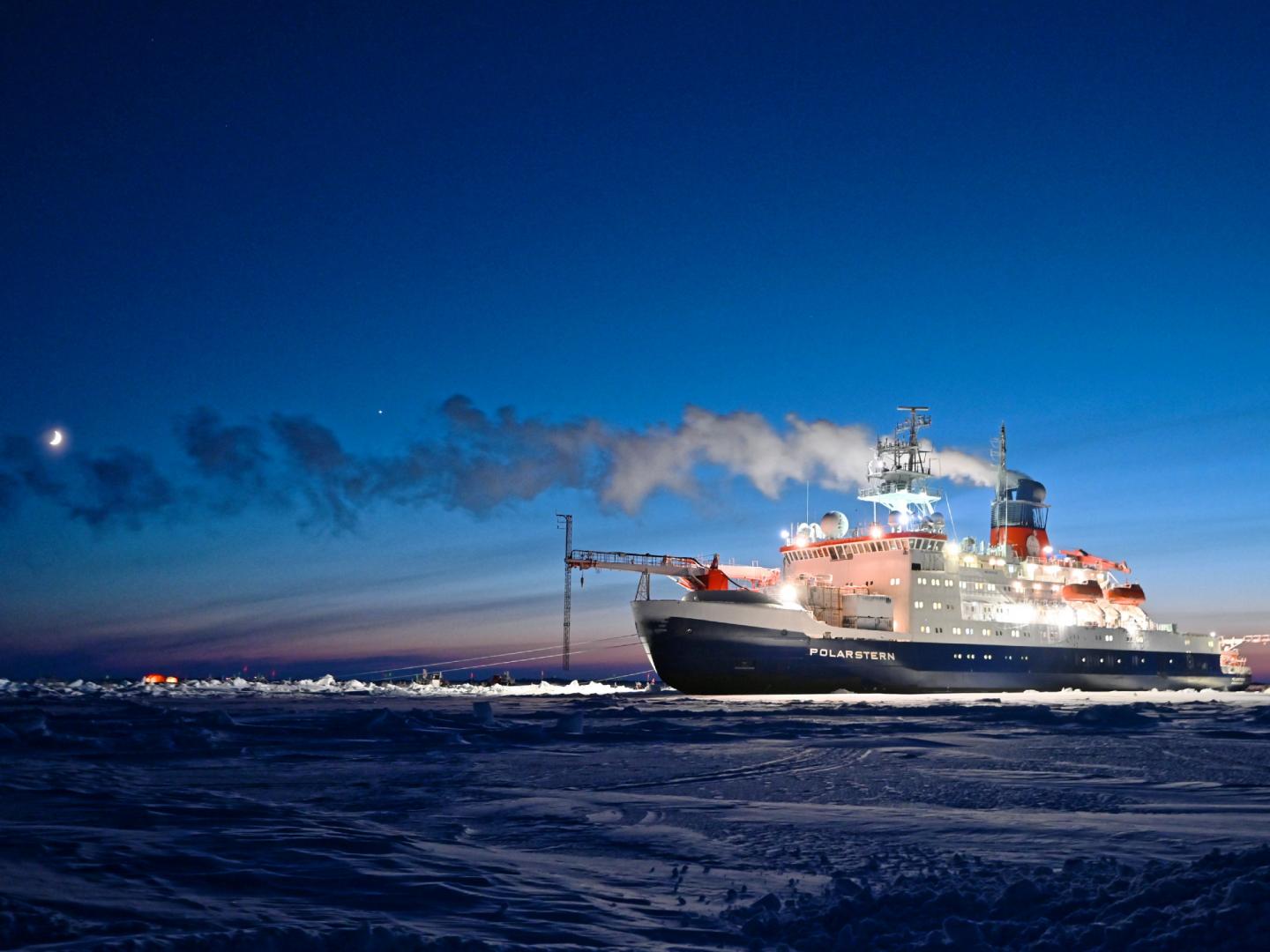 Bremerhaven/Leipzig. With the return of the Polarstern, the largest Arctic expedition of all times has come to a successful end. For more than a year, the German research icebreaker travelled in 5 cruise legs with more than 400 people from 20 countries to investigate the epicentre of climate change more precisely than ever before. At the end of the expedition, which cost around 140 million euros, the Alfred Wegener Institute, Helmholtz Centre for Polar and Marine Research (AWI), came to a positive conclusion: despite all the unforeseeable difficulties, it had succeeded in advancing knowledge about the Earth’s climate system and its changes by a decisive step.

From Leipzig’s point of view, the complex project was also successful: all 7 participants from the Leibniz Institute for Tropospheric Research (TROPOS) and the Leipzig University are back in good health and with valuable climate data. Two measurement programmes that are central to research into the Arctic atmosphere were able to be carried out in full despite weather extremes and corona: A multi-wavelength lidar scanned the air layers above Polarstern during the entire expedition. In 369 days, 640 million laser pulses went into the sky and 112 gigabytes of data were collected. In July, the MOSAiC atmosphere team was able to measure the lowest air layer above the melting ice floe with a captive balloon. Within a tight time window, 33 balloon ascents were achieved, during which a total of 31725 metres of rope were unwound and rewound. The balloon measurements by TROPOS and Leipzig University are particularly important for understanding the polar atmosphere during the melting phase, because the measurements originally planned in parallel with aircraft from Spitsbergen had to be postponed until autumn due to the corona pandemic.

“We are pleased that the ambitious plans have essentially been realised despite all the difficulties. A highlight are definitely the insights into the troposphere at the North Pole during the winter with our lidar. Nobody has ever been able to observe it so far north during the polar night off MOSAiC”, says Prof. Andreas Macke, Director of TROPOS. The evaluation of the data is still in full swing, but there are indications that the same applies to the atmosphere as to the ice on the ground: “There are many indications that the atmosphere of the Arctic has already changed significantly. We have seen more smoke than expected. The huge forest fires are apparently affecting the polar regions. Even these once pristine areas seem to have reached the ‘Pyrocene’. However, it will take months before concrete results are available, during which the data will have to be examined, analysed and discussed before they can finally be published. “The fact that we have measured both the atmosphere and the energy balance on the ground over a complete Arctic year will contribute greatly to our understanding of Arctic warming,” adds Macke.

At the moment, the joy that people and technology have survived the strains well outweighs. Also at Dr. Ronny Engelmann, scientist and laser expert from TROPOS, who is responsible for the remote sensing measurements within the OCEANET project on Polarstern: “It was fascinating to experience the Arctic in winter and to be allowed to be in a region where only a few people have been before at this time of year. As a scientist, I am glad that, thanks to good care by my colleagues, our equipment has been able to last for a year and has also survived the extreme cold of the polar night with temperatures down to -40 degrees Celsius without any failures. The experiences of the last ten years, during which our OCEANET container has been on board of Polarstern, have been a great help. Without stable technology, we would never have known what dust layers had moved across the Arctic”, physicist Engelmann looks back. The lidar was in operation from 28 September 2019 to 02 October 2020 without any significant failures. This was ensured by Dr Ronny Engelmann, Hannes Griesche, Martin Radenz, Julian Hofer and Dr Dietrich Althausen, some of whom spent up to four months on the five sections of the cruise. Even though the remote sensing instruments run mostly automatically, they need regular maintenance: the flash lamps that emit the laser pulses had to be changed five times, for example, or 60 litres of liquid nitrogen had to be replaced each time the microwave radiometer was calibrated. Together with other instruments such as radiation meters, cloud camera, rain gauge and photometer on the OCEANET measuring container from TROPOS, a total of over one and a half terabytes of data were collected and around 60,000 kWh of electricity was consumed.

While the remote sensing instruments on the foredeck of Polarstern could practically run the entire expedition, the teams on the ice had only a short time window each, which had to be used as effectively as possible. The balloon team from TROPOS and Leipzig University was able to work on the ice for a total of 37 days. Thanks to support from other teams, 33 balloon ascents were achieved, in which the BELUGA tethered balloon, which was the size of a bus, could measure aerosol particles, radiation and meteorological parameters up to a height of 1500 metres above the ice. To fill the balloon several times, 474 cubic metres of helium were consumed and holes up to 6 metres deep had to be drilled into the thawing ice for the ice anchors. “Our time on the ice was short but intense. The many melt ponds and frequent polar bear visits demanded a lot of improvisation. Because of the support from the whole MOSAiC team we were able to master difficult situations. This made our balloon measurements a big team effort from a great team that I will remember for a long time to come,” said Christian Pilz of TROPOS. The vertical profiles that Pilz recorded together with the radiation measurements of his colleague Michael Lonardi from Leipzig University will provide important insights into the lower atmosphere of the summer Arctic. For example, the team was able to register temperatures of 14 degrees Celsius at an altitude of 300 metres, although the temperature on the ground was only just above freezing point. Without such on-site measurements, it would not be possible to estimate the influence of the air layers on the ground on thawing sea ice.

Originally it was planned to study the near-ground atmosphere above the MOSAiC ice floe by tethered balloon and the higher layers by aeroplane in early summer. However, due to the corona pandemic, flights via Spitsbergen were not possible at that time. Supply and personnel exchange had to be organised with research vessels from Germany and the aircraft campaign had to be postponed until September. “The measurements with the Leipzig tethered balloon are therefore important in-situ aerosol measurements at MOSAiC in this layer of air, which is very important for the climate in the Arctic”, emphasises Andreas Macke from TROPOS, “As an atmospheric researcher, I am particularly pleased that the balloon experiment was successful for the second time after 2017 and provided very valuable data”.

In September 2020, the German research aircraft Polar 5 and Polar 6 of the AWI were the first foreign aircraft to take off from the airport Longyearbyen for several measurement flights from Spitsbergen to the central Arctic to study the atmosphere in the context of MOSAiC since the corona lockdown: “With the extensive measurements on radiation and particles, we want to find out how clouds in the Arctic affect warming on the ground. In recent years, the Arctic has warmed up more than any other region on earth. The feedback mechanisms involved are very complex and not yet sufficiently understood. This knowledge is essential, however, if climate models are to be able to estimate how quickly the climate there will change, even for the region around the North Pole,” explains Prof. Manfred Wendisch from the Leipzig University, who is also the spokesman for the Collaborative Research Centre “Arctic Climate Change” of the German Research Foundation (DFG). The network includes the universities in Bremen, Cologne and Leipzig as well as the AWI in Bremerhaven and the TROPOS in Leipzig. The aim of the research network is to observe the dramatic climate change in the Arctic using various methods in order to improve the reliability of models and enable more accurate predictions of further warming in the Arctic. The MOSAiC expedition will make a significant contribution to this and will be intensively evaluated by the alliance partners in the coming months.

“I’m very pleased with how the MOSAiC expedition progressed, and what a complete success it has been. Through the expedition, we can provide the climate data and observations that humanity so urgently needs in order to make fundamental and pressing political decisions on climate protection”, said Prof Markus Rex, Expedition Leader and head of the MOSAiC project, Alfred Wegener Institute, Helmholtz Centre for Polar and Marine Research (AWI). “We’ve seen how the Arctic ice is dying. In the summer, even at the North Pole, it was characterised by extensive melting and erosion. If we don’t make immediate and sweeping efforts to combat climate warming, we’ll soon see ice-free Arctic summers, which will have incalculable repercussions for our own weather and climate. Though today the Central Arctic remains a fascinating, frozen landscape in winter, the ice is only half as thick as it was 40 years ago, and the winter temperatures we encountered were nearly always ten degrees warmer than what Fridtjof Nansen experienced on his ground-breaking Arctic expedition over 125 years ago.”

On 20 September 2019 Polarstern departed from the Norwegian port of Tromsø, bound for the Central Arctic, the epicentre of climate change. Once there, the ship allowed itself to become trapped in the ice, and began a one-year-long drift across the North Pole, completely at the mercy of natural forces – the route and speed were solely determined by the ice drift, powered by wind and currents. Over the five cruise legs of the expedition, a total of 442 researchers, Polarstern crewmembers, young investigators, teachers and members of the press took part. Seven ships, several aircraft and more than 80 institutions from 20 countries were involved. The researchers, who hailed from 37 countries, had a common goal: to investigate complex interactions in the climate system between the atmosphere, ice and ocean, so as to better represent them in climate models. They also explored life in the Central Arctic for an entire year. Now they have returned home with a wealth of impressions from the rapidly transforming Arctic, and with an unparalleled treasure trove of data, which an entire generation of climate researchers will focus on analysing.

From Leipzig’s perspective, the next major measurement campaign in the Arctic will be the “HALO (AC)” mission with the German research aircraft HALO and Polar 6 in spring 2022. The tethered balloon BELUGA, on the other hand, will already return to the Arctic skies in late summer 2021 – if pandemic conditions permit. This time, however, from solid ground in the research village Ny-Ålesund on Spitsbergen. Tilo Arnhold

Previous press releases on the subject:

This Evening Sees the Start of MOSAiC – the Greatest Arctic Research Expedition of All Time (press release, 20 Sep 2019)

Focus on the Arctic Climate: German Scientists on Missions in the Arctic by Ship and Plane (press release, 11 May 2017)