The manatee population in Florida was largely impacted last year. More than 1,000 of them died in 2021, due mostly to starvation. They consume about 100 pounds of seagrass a day, and this staple food is now scarce in Florida’s Indian River Lagoon, a 156-mile-long estuary along the state’s east coast. 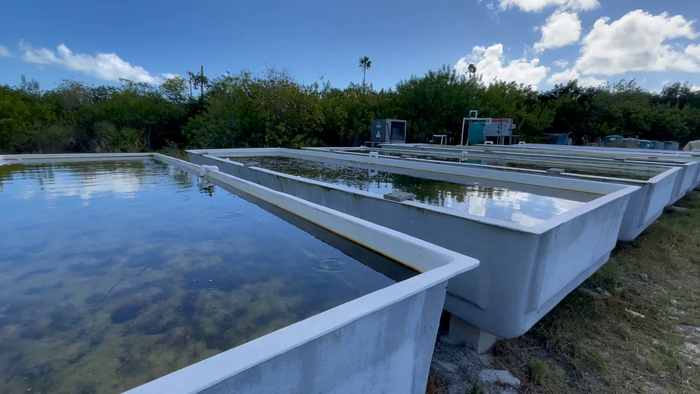 The manatee population in Florida was largely impacted last year. More than 1,000 of them died in 2021, due mostly to starvation. They consume about 100 pounds of seagrass a day, and this staple food is now scarce in Florida’s Indian River Lagoon, a 156-mile-long estuary along the state’s east coast.

Dennis Hanisak, Ph.D., from Florida Atlantic University’s Harbor Branch Oceanographic Institute, is investigating the cause of this seagrass loss and contributing to important restoration efforts in the lagoon. He collaborated on a study with researchers from the St. Johns River Water Management District to examine the  extent and cover of seagrasses in the Indian River Lagoon. Researchers used data from two independent lines of evidence – large-scale maps and fixed transects. Maps documented locations and large ranges of seagrass beds periodically since the 1940s, and surveys of fixed transects generated changes in percent cover and depths at the end of the canopy since 1994.

For the study, published in the journal Frontiers in Marine Science, researchers looked at how the distribution and abundance of seagrasses in the Indian River Lagoon responded to spatiotemporal patterns in salinity, temperature, and the availability of light.

Results showed that across all reaches, about 7,400 acres of seagrass were lost between 1943 and 1994. Between 2011 and 2019, about 58 percent of seagrasses were lost, with offshore ends of canopies moving shoreward and shallower. These changes were related primarily to reduced availability of light and coincided with blooms of phytoplankton. Intense blooms increased shading and loss of seagrasses. Salinities and temperatures did reach levels that could cause stress, but their effects were mitigated if enough light was available.

“Light is mandatory for growth and survival of seagrasses,” said Hanisak, study co-author and a research professor at FAU Harbor Branch. “Reduced light causes changes in the physiology and the size and shape of seagrass, such as decreased leaf length, leaf width, leaves per shoot, and shoot growth. Seagrasses can cope with reduced light for short periods, however, once poor clarity becomes chronic or recurrent, detrimental effects on survival, resilience, and recovery arise.”

Fortunately, data also showed that patches of seagrasses at depths of 0.5 to 0.9 meters persisted for 22 to 24 years, which suggests that this depth zone could hold the key to recovery. Yet, optimistic estimates predict recovery could take 12 to 17 years. Such a long-term, widespread loss of a key structural habitat may generate multiple adverse effects in the system, and mitigating these effects may entail planting seagrasses to accelerate recovery.

To help with recovery efforts, Hanisak and his team are experimenting with growing seagrass in large tanks and then transplanting it into the Indian River Lagoon to try to restore some of the lost seagrass beds. This seagrass nursery technology project recently received a grant from Florida Power & Light Company (FPL) through its charitable arm, the NextEra Energy Foundation, Inc. The Florida Fish and Wildlife Conservation Commission is funding the expansion of the seagrass nursery while FPL is providing the funding to operate the nursery for at least three years.

“We are maintaining the seagrass nursery in a ‘ready mode’ so that we can readily partner with agencies and other interested parties in experimentation or pilot studies for seagrass restoration efforts,” said Hanisak.

The FAU Harbor Branch research team is conducting experiments that will lead to further improvements in the nursery such as optimizing seagrass productivity in the nursery, enhancing sediment constituents and other media in the nursery tanks, and boosting the frequency and magnitude of harvesting planting units, with the goal of maximizing the annual production of planting units.

The researchers also will continue to explore the genetic diversity of the Indian River Lagoon seagrasses and how that diversity might be best used to support seagrass restoration in the lagoon, including selection of strains that have favorable traits such as rapid growth and broader environmental tolerance.

“This gift and continued support from FPL is helping our ongoing research in marine science and technology and addressing critical issues affecting our marine ecosystems,” said Jim Sullivan, Ph.D., executive director, FAU Harbor Branch. “With this funding, our researchers are applying unique techniques to help repair the damages to the crucial aquatic plants that are essential to the health of the Indian River Lagoon, and moreover, critical for the survival of our beloved lagoon manatees that are dependent on this dietary staple.”