Unintended consequences: analyzing interventions on mercury use and emissions in artisanal gold mining

Mercury is a unique element that has found a myriad of scientific and practical applications throughout the centuries. Besides its well-known role in commercial thermometers, mercury is widely used in artisanal and small-scale gold mining (ASGM) because it forms a liquid amalgam with gold. By heating the mixture, mercury evaporates, leaving behind gold. The problem with this style of ASGM is that mercury vapors, and mercury in general, are extremely dangerous to human health and the environment. 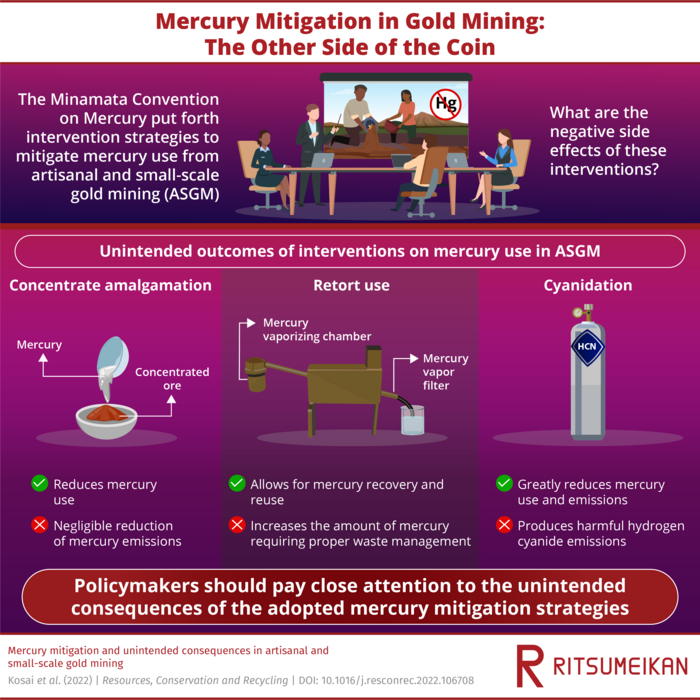 Mercury is a unique element that has found a myriad of scientific and practical applications throughout the centuries. Besides its well-known role in commercial thermometers, mercury is widely used in artisanal and small-scale gold mining (ASGM) because it forms a liquid amalgam with gold. By heating the mixture, mercury evaporates, leaving behind gold. The problem with this style of ASGM is that mercury vapors, and mercury in general, are extremely dangerous to human health and the environment.

Today, there exists a UN treaty aimed at mitigating the risks posed by mercury through a series of mid- and long-term strategies. In particular, Article 7 of the treaty deals with the problem of mercury in ASGM, stating that party members have an obligation to minimize or outright eliminate mercury use and emissions in such activities within their borders.

Although concrete intervention strategies have been suggested and implemented with some success in this regard, researchers have paid little attention to the side effects that these measures can have. To tackle this issue, a group of Japanese researchers, including Professors Shoki Kosai and Eiji Yamasue from Ritsumeikan University, examined the effects of the three primary strategies proposed by the UN’s Environment Programme from a wider perspective. The results of their study were made available online on October 13, 2022 and will be published in Volume 188 of Resources, Conservation and Recycling in January 2023.

The three strategies the researchers focused on were the practice of concentrate amalgamation, using a mercury retort, and using cyanide instead of mercury to extract gold. The first strategy involves concentrating the gold ore as much as possible before adding mercury by employing tools such as a centrifuge or a floatation tank. This way, the total amount of mercury needed per gram of gold is greatly reduced. The second strategy is based around the use of low-cost devices called retorts, which are designed to trap harmful mercury vapors and turn them back into liquid mercury. The third strategy involves outright replacing mercury with cyanide-based processes for gold mining.

Using mathematical models and data from 80 countries with ASGM published in the UN’s Global Mercury Assessment 2018, the researchers projected the effects of these intervention strategies on global mercury use and emissions up to 2050, as well as their associated unintended consequences. One of the main conclusions of their analysis was that the first intervention strategy—concentrate amalgamation—does not seem to lead to a significant reduction in mercury use nor emissions, though it also does not have significant negative side effects. In contrast, the use of retorts can considerably reduce the amount of global mercury emissions. However, using retorts also means that there would be a great surge in the amount of liquid mercury that has to be properly managed as a waste product, therefore creating a new problem on its own. Finally, the cyanidation approach does lead to an immense reduction in mercury use and emissions, but replaces them with cyanide emissions, which are also dangerous and toxic to the environment (albeit less than mercury).

In short, when dealing with the problem of mercury in ASGM, it is essential to avoid getting tunnel vision and focus excessively on a few outcome measures while ignoring the totality of the effects of the interventions proposed. In this regard, Professor Kosai comments: “The findings of our study quantitatively identified the extent of the problems inadvertently created by different intervention strategies. Our results clearly show that the more effective measures for reducing mercury use and emissions require the most attention with regard to their unintended consequences.”

The team hopes that, based on the estimates presented in this study, it will be easier to identify and develop the required actions to improve upon each intervention strategy, with the ultimate goal being sustainability in the ASGM field. “There are about 10 to 19 million people involved in ASGM activities in Asia, Africa, and Central and South America. Our efforts will assist in mitigating health damages caused by the absorption of mercury vapors in the future,” states Professor Yamasue.

This study will surely put us one step closer to a world free from the dangers of mercury.

About Ritsumeikan University, Japan
Ritsumeikan University is one of the most prestigious private universities in Japan. Its main campus is in Kyoto, where inspiring settings await researchers. With an unwavering objective to generate social symbiotic values and emergent talents, it aims to emerge as a next-generation research university. It will enhance researcher potential by providing support best suited to the needs of young and leading researchers, according to their career stage. Ritsumeikan University also endeavors to build a global research network as a “knowledge node” and disseminate achievements internationally, thereby contributing to the resolution of social/humanistic issues through interdisciplinary research and social implementation.

About Associate Professor Shoki Kosai from Ritsumeikan University, Japan
Shoki Kosai is an Associate Professor at Ritsumeikan University’s Global Innovation Research Organization in Japan. His research focuses on natural resource conservation, renewable energy, and making the environment cleaner and greener. He holds a Master’s degree in Renewable Energy from the University of Malaya, Malaysia. In 2020, he received a PhD degree from Kyoto University, Japan. He has over 30 publications under his belt. He has also presented his research frequently in the IET Clean Energy and Technology Conference.

About Professor Eiji Yamasue from Ritsumeikan University, Japan
Eiji Yamasue is a Professor at the Department of Mechanical Engineering in the College of Science and Engineering of Ritsumeikan University. He received a PhD from Tokyo Institute of Technology in 2000. His research interests include industrial ecology, energy, and resources, among others. He has authored several books and has published 322 papers with over 1600 citations to his credit. He was the recipient of two science prizes in 2017 including Energy and Material Efficiency and CO2 Reduction in the Steel Industry Best Poster Award. He has received several grants-in-aid for scientific research as well as competitive grants.

Funding information
This study was supported by research funds from the Environment Research and Technology Development Fund (SII-6-2: JPMEERF20S20620).