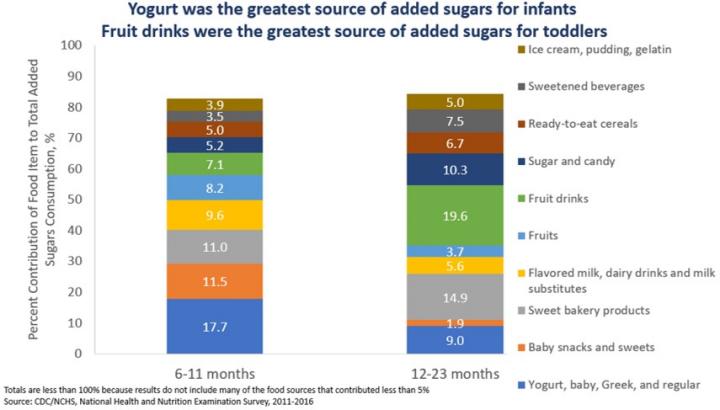 Philadelphia, November 14, 2019 – A new study in the Journal of the Academy of Nutrition and Dietetics, published by Elsevier, found that nearly two-thirds of infants (61 percent) and almost all toddlers (98 percent) consumed added sugars in their average daily diets, primarily in the form of flavored yogurts (infants) and fruit drinks (toddlers). Infants were 6-11 months, and toddlers were 12-23 months.

The analysis documented some good news in the decline over the study period (2005-6 and 2015-16) in the percentage of infants and toddlers whose daily diets include added sugars, as well as the amounts they consumed. Yet the widespread intake points to a serious and persistent problem: the early development of eating patterns associated with negative health conditions.

“Our study, which is the first to look at trends in added sugars consumption by infants and toddlers, documents that most infants and toddlers consume added sugars. This has important public health implications since previous research has shown that eating patterns established early in life shape later eating patterns,” explained lead investigator Kirsten A. Herrick, PhD, MSc, Division of Health and Nutrition Examination Surveys, National Center for Health Statistics, Centers for Disease Control and Prevention, Hyattsville, MD, USA. She cited an earlier study that found that 6-year-olds who had consumed any sugar-sweetened beverage (SSB) before the age of one were more than twice as likely to consume an SSB at least once a day compared to 6-year-olds who had not consumed any before the age of one.

Health organizations in the United States promulgate guidelines that recommend limiting sugar intake to 9 tsp or less for adult men, and 6 tsp or less for adult women and children between 2 and 19. With no comparable research available for infants and toddlers prior to this study, only one organization, the American Heart Association, provided any guidance for children under age 2. “Our study’s findings about infant and toddler diets should raise awareness among health organizations and practitioners and inform future guidelines and recommendations,” she added.

The investigators analyzed data for 1,211 infants and toddlers (6-23 months) from the National Health and Nutrition Examination Survey (NHANES) 2011-2016, a nationally representative study conducted by the US Centers for Disease Control and Prevention. They used the Food Patterns Equivalents Database and the United States Department of Agriculture’s What We Eat In America’s list to categorize foods. Sugars contained in breast milk and formula were not included in the consumption estimates.

According to Dr. Herrick, parents should be mindful of added sugars levels in the foods chosen when weaning their infants. “The transition from a milk-based diet (breast milk and formula) to table foods has an impact on nutrition, taste preference, and eating patterns. More work is needed to understand this critical period.” She recommends discussing which solid foods to introduce during weaning with a child’s healthcare provider and pointed to the Nutrition Facts label as another resource to support informed decisions. While the federal requirement to include added sugars content of a food or beverages on the Nutrition Facts label is not mandatory until January 2020, many labels already include this information. For more information about infant and toddler nutrition, visit http://www.cdc.gov/nutrition.

In September 2019, the Academy of Nutrition and Dietetics joined the American Heart Association, the American Academy of Pediatric Dentistry, and the American Academy of Pediatrics to recommend breast milk, infant formula, water, and plain milk as part of a new set of comprehensive beverage recommendations for children, outlined by age (birth through age 5). They caution against beverages that are sources of added sugars in young children’s diets, including flavored milks (e.g., chocolate, strawberry) and sugar- and low-calorie sweetened beverages, in addition to a wide variety of beverages that are on the market and targeted to children that provide no unique nutritional value.

Behind the magic: Making moving photos a reality

A simple solution to a complex problem