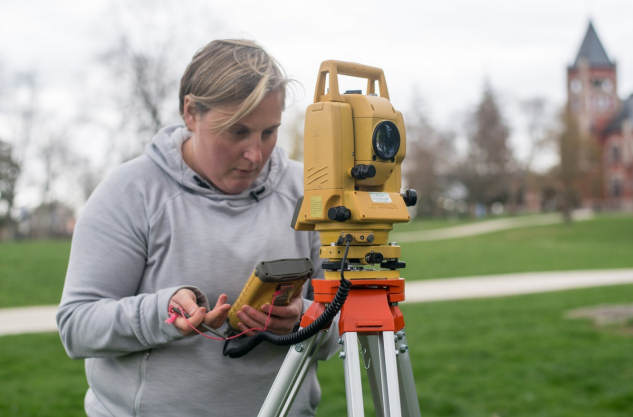 DURHAM, N.H. – Merging an innovative modeling technique with old-fashioned sleuthing, researchers from the University of New Hampshire have shed new light on the mystery of pre-European archaeological monument sites in Michigan, even though 80 percent of the sites they’re studying no longer exist. The study, published recently in the journal PNAS, provides an important new geospatial approach for archaeologists and other cultural heritage professionals who have grappled with the fact that many significant ancient monuments have been lost forever to modern development.

Meghan Howey, associate professor of anthropology, and Michael Palace, associate professor of Earth and geospatial science, both of UNH, along with Crystal McMichael of the University of Amsterdam (formerly a UNH postdoctoral researcher), set out to better understand the roles of two different kinds of earthen monuments in Michigan that have been subject to high rates of modern destruction. Their focus was on burial mounds and circular earthwork mounds and enclosures dating to the Late Precontact period of 1,000 – 1,600 A.D. Earthen mounds and enclosures are common across the eastern U.S. and they have long been subject to misguided and popular speculation. Because of this, it is important to study these monumental constructions systematically to understand their social significance in the lives of the past indigenous communities who built them.

“Our goal was to build a case study to help identify which spatial and environmental variables were important to the placement of these earthen monuments across Michigan’s landscape,” said Howey, who is the James H. Hayes and Claire Short Hayes Professor of the Humanities. “Understanding how monuments reconfigure landscapes and affect societal development is a grand challenge in archaeology.”

Utilizing a modeling technique called Maximum Entropy, or MaxEnt, borrowed from landscape ecology, the researchers determined that the two types of monuments occupied distinct niches in the landscape. Burial mounds were located near inland lakes, probably to serve local needs like food, shelter, and community; while circular earthwork enclosures, some larger than football fields, were located near rivers.

“These enclosures became these shared ritual spaces. They were on rivers so they were accessible to multiple groups,” said Howey, adding that canoe travel along Michigan’s major rivers enabled the ancestral Anishinaabeg people to transport themselves and their goods long distances.

To unlock these secrets, Howey used archaeological archives to create a database of mounds and enclosures documented in Michigan. Of the 60 enclosure locations and 261 mound locations, only an estimated 13 enclosures and 45 mounds exist today.

Palace, a remote sensing and geospatial science specialist, suggested inputting this information into MaxEnt, a modeling approach commonly used in ecology because it works even when there is no secure record of absence data points. “Just because you don’t hear a bird doesn’t mean it’s not there,” said Palace. The thought was by entering environmental values like topography, temperature, rainfall and distance from lakes or rivers they would be able to model “habitats” for these two different types of monuments, not just for where they are known to be remnant today but broadly for an entire landscape.

With the MaxEnt modeling program they were able to turn the cultural process of monument building into a ‘species’ which allowed specific patterns to appear. “It was really cool to show you can go to limited archival records and tell a new story about the past from these imperfect, limited datasets,” said Howey. The researchers plan to expand their modeling approach, which is supported by a NASA space archaeology grant, to look at these monumental sites across the entire Great Lakes region. It’s an archaeological area Howey calls understudied and underappreciated.

“As development continues across the globe, and more and more ancient sites, including monuments, are erased by plows and heavy machinery, archival data may someday be the only surviving information,” said Howey. “Modeling approaches like MaxEnt, which work well with limited data sets, could become an increasingly important tool for archaeologists to explore the past.”

The University of New Hampshire, founded in 1866, is a world-class public research university with the feel of a New England liberal arts college. A land, sea, and space-grant university, UNH is the state’s flagship public institution, enrolling 13,000 undergraduate and 2,500 graduate students.