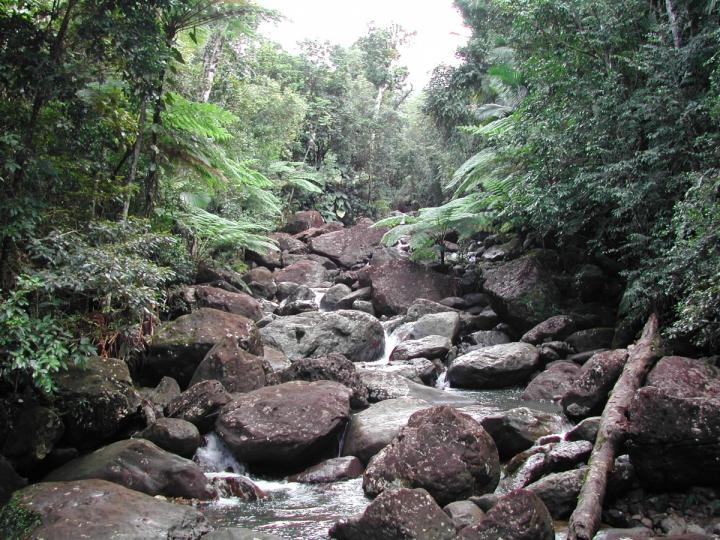 DURHAM, N.H. – Researchers at the University of New Hampshire have found unprecedentedly high levels of nitrate, an essential plant nutrient, in streams and watersheds of Puerto Rico for a year after two consecutive major hurricanes in 2017. This high amount of nitrate may have important climate change implications that could harm forest recovery and threaten ecosystems along Puerto Rico’s coastline by escalating algal blooms and dead zones.

“Nitrate is important for plant growth but this is a case where you can have too much of a good thing,” said William McDowell, professor of environmental science at UNH. “The levels of nitrate we were seeing were unusually high. Over the last three decades, we’ve noticed elevated levels of nitrate right after a hurricane, but after these back-to-back major storms, the wheels came off the bus. We saw an increase in the nitrate levels that still has not fully recovered.”

Researchers used aquatic sensors in streams in the tropical Luquillo Mountains of Puerto Rico to obtain readings every 15 minutes to follow weekly stream chemistry after both Hurricane Irma (August 2017) and Hurricane Maria (September 2017). They compared this new data to weekly stream chemistry results compiled over the last 35 years – the longest record of tropical stream chemistry in the world. As expected from past hurricanes, nitrate concentrations increased for a few months after each storm, peaking at around four months. The findings, reported at the 2018 fall meeting of the American Geophysical Union (AGU) in Washington, D.C., revealed that unlike past hurricanes, the increase was still evident nine months after Hurricane Maria and did not return to previous base levels. The base readings remained higher and each time it rained the nitrate levels spiked, even after small rainstorms, likely reflecting major biotic processes (leaf and tree decomposition and vegetation regrowth) that control nitrate fluxes.

“After Hurricanes Irma and Maria, there seems to be a “new normal” for the base level of nitrate,” said McDowell. “If this continues and the mountain streams transport these higher levels of nitrate to the ocean it could disrupt the coastal ecosystem, possibly endangering coral and other sea life.”

Also of concern is forest productivity. Based on previous studies and observations at the Luquillo study site, the historical frequency of major hurricane direct hits on the island was estimated to be every 50-60 years. But recent records show that it is now happening once every 10 years. With this increase in frequency and storm strength, much greater export of nitrate to nitrogen-limited coastal waters can be expected than previously estimated, which could deplete the standing stocks of nitrate in the forest and have uncertain effects on forest productivity and regrowth.

This research is based on work supported by the National Science Foundation (NSF) and conducted at the NSF Long-Term Ecological Research (LTER) and the National Critical Zone Observatory (CZO) site in the Luquillo Mountains.

The University of New Hampshire is a flagship research university that inspires innovation and transforms lives in our state, nation and world. More than 16,000 students from all 50 states and 71 countries engage with an award-winning faculty in top ranked programs in business, engineering, law, health and human services, liberal arts and the sciences across more than 200 programs of study. UNH’s research portfolio includes partnerships with NASA, NOAA, NSF and NIH, receiving more than $100 million in competitive external funding every year to further explore and define the frontiers of land, sea and space.

Caption: Aquatic sensors are used in streams like this one, Quebrada Sonadora, which is one of the study sites in the Luquillo Mountains of Puerto Rico where researchers monitored nitrate levels before and after Hurricanes Irma and Maria.

Caption: The usually tranquil Quebrada Sonadora stream, one of the study sites for the aquatic sensors, now raging with rushing, muddy water just after a storm.

Caption: Aerial photo of the coastline of Puerto Rico that shows one of the many streams and rivers that lead down from the mountains to the ocean.