New and updated climate commitments fall far short of what is needed to meet the goals of the Paris Agreement, leaving the world on track for a global temperature rise of at least 2.7°C this century, according to the UN Environment Programme’s (UNEP) latest Emissions Gap Report 2021: The Heat Is On. 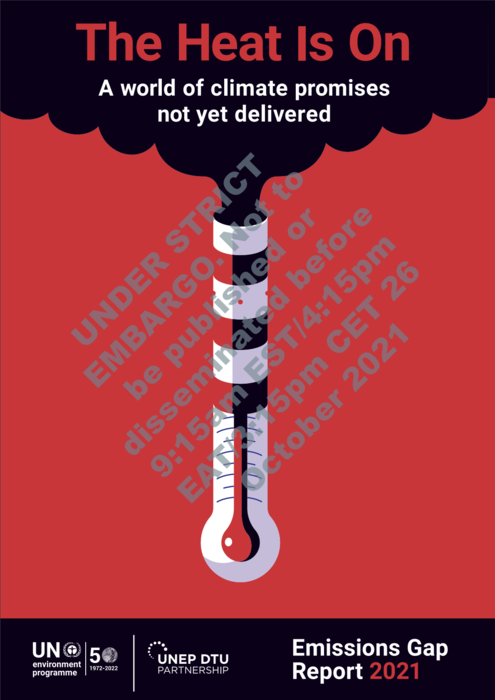 New and updated climate commitments fall far short of what is needed to meet the goals of the Paris Agreement, leaving the world on track for a global temperature rise of at least 2.7°C this century, according to the UN Environment Programme’s (UNEP) latest Emissions Gap Report 2021: The Heat Is On.

The report, now in its 12th year (available post-embargo at www.unep.org), finds that countries’ updated Nationally Determined Contributions (NDCs) – and other commitments made for 2030 but not yet submitted in an updated NDC – only take an additional 7.5 per cent off predicted annual greenhouse gas emissions in 2030, compared to the previous round of commitments. Reductions of 30 per cent are needed to stay on the least-cost pathway for 2°C and 55 per cent for 1.5°C.

Released ahead of the UN Climate Change Conference (COP26), the latest round of climate talks taking place in Glasgow, the report finds that net zero pledges could make a big difference. If fully implemented, these pledges could bring the predicted global temperature rise to 2.2°C, providing hope that further action could still head off the most-catastrophic impacts of climate change.

However, net zero pledges are still vague, incomplete in many cases, and inconsistent with most 2030 NDCs.

“Climate change is no longer a future problem. It is a now problem,” said Inger Andersen, Executive Director of UNEP.

“To stand a chance of limiting global warming to 1.5°C, we have eight years to almost halve greenhouse gas emissions: eight years to make the plans, put in place the policies, implement them and ultimately deliver the cuts. The clock is ticking loudly.”

As of 30 September 2021, 120 countries, representing just over half of global greenhouse gas emissions, had communicated new or updated NDCs. In addition, three G20 members have announced other new mitigation pledges for 2030. To have any chance of limiting global warming to 1.5°C, the world has eight years to take an additional 28 gigatonnes of CO2 equivalent (GtCO2e) off annual emissions, over and above what is promised in the updated NDCs and other 2030 commitments.

To put this number into perspective, carbon dioxide emissions alone are expected to reach 33 gigatonnes in 2021. When all other CET greenhouse gases are taken into account, annual emissions are close to 60 GtCO2e.

So, to have a chance of reaching the 1.5°C target, we need to almost halve greenhouse gas emissions. For the 2°C target, the additional need is lower: a drop in annual emissions of 13 GtCO2e by 2030.

Zeroing in on net zero

Net zero pledges – and their effective execution – could make a big difference, the authors find, but current plans are vague and not reflected in NDCs. A total of 49 countries plus the EU have pledged a net zero target. This covers over half of global domestic greenhouse gas emissions, over half of GDP and a third of the global population.

Eleven targets are enshrined in law, covering 12 per cent of global emissions. If made robust and implemented fully, net zero targets could shave an extra 0.5°C off global warming, bringing the predicted temperature rise down to 2.2°C.

However, many of the national climate plans delay action until after 2030, raising doubts over whether net zero pledges can be delivered.

Twelve G20 members have pledged a net zero target, but they are still highly ambiguous. Action also needs to be front-loaded to make it in line with 2030 goals. “The world has to wake up to the imminent peril we face as a species,” Andersen added.

“Nations need to put in place the policies to meet their new commitments, and start implementing them within months. They need to make their net zero pledges more concrete, ensuring these commitments are included in NDCs, and action brought forward. They then need to get the policies in place to back this raised ambition and, again, start implementing them urgently.”

“It is also essential to deliver financial and technological support to developing nations – so that they can both adapt to the impacts of climate change already here and set out on a low-emissions growth path.”

The potential of methane and market mechanisms

Every year, the Emissions Gap Report looks at the potential of specific sectors. This year, it focuses on methane and market mechanisms. Reduction of methane emissions from the fossil fuel, waste and agriculture sectors can contribute to closing the emissions gap and reduce warming in the short term.

Methane emissions are the second largest contributor to global warming. The gas has a global warming potential over 80 times that of carbon dioxide over a 20-year horizon; it also has a shorter lifetime in the atmosphere than carbon dioxide – only twelve years, compared to up to hundreds for CO2 – so cuts to methane will limit temperature increase faster than cuts to carbon dioxide.

Carbon markets, meanwhile, have the potential to reduce costs and thereby encourage more ambitious reduction pledges, but only if rules are clearly defined, are designed to ensure that transactions reflect actual reductions in emissions, and are supported by arrangements to track progress and provide transparency.

Revenues earned through these markets could fund mitigation and adaptation solutions domestically and in vulnerable nations where the burdens of climate change are greatest.

Finally, the report finds that the opportunity to use COVID-19 fiscal rescue and recovery spending to stimulate the economy while backing climate action has been missed in most countries.

Only around 20 per cent of total recovery investments up to May 2021 are likely to reduce greenhouse gas emissions. Of this spending, almost 90 per cent is accounted for by six G20 members and one permanent guest.

COVID-19 spending has been far lower in low-income economies (USD 60 per person) than advanced economies (USD 11,800 per person). Gaps in finance are likely to exacerbate gaps in vulnerable nations on climate resilience and mitigation measures.

About the UN Environment Programme (UNEP) UNEP is the leading global voice on the environment. It provides leadership and encourages partnership in caring for the environment by inspiring, informing and enabling nations and peoples to improve their quality of life without compromising that of future generations.