Underwater ‘breathing’ plants could be key to stress-resistant crops

Wetland plants have a high tolerance against flooding due to the formation of “lysigenous aerenchyma,” air channels that help transfer gases to the submerged roots. These channels also help the plant withstand drought and nutrient deficiency. Now, scientists from Japan investigate the underlying mechanism of aerenchyma formation to understand the phenomenon better, opening doors to the development of crops that are resilient against extreme weather changes. 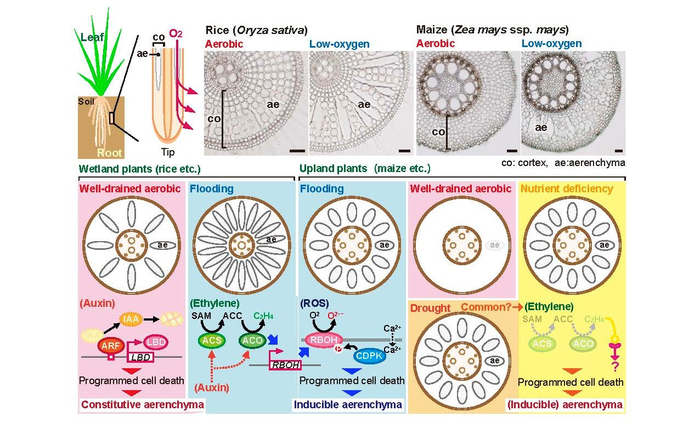 Wetland plants have a high tolerance against flooding due to the formation of “lysigenous aerenchyma,” air channels that help transfer gases to the submerged roots. These channels also help the plant withstand drought and nutrient deficiency. Now, scientists from Japan investigate the underlying mechanism of aerenchyma formation to understand the phenomenon better, opening doors to the development of crops that are resilient against extreme weather changes.

Floods and droughts are the main environmental disasters responsible for most crop failures. Aerenchyma formation can help crops cope with these environmental stresses. However, it is not commonly observed in non-wetland species like wheat and maize, which are staple food crops in certain areas of the world. Researchers Takaki Yamauchi and Mikio Nakazono from Nagoya University, Japan, have surveyed literature on the topic to get a concrete overview of the various factors involved in aerenchyma formation. “If we can genetically control the timing and amount of lysigenous aerenchyma formation in roots of all agronomically important crops, such as maize, wheat and soybean, the global crop production loss could be dramatically reduced,” says Dr. Nakazono.

Dr. Yamauchi and Dr. Nakazono suggest imagining the lysigenous aerenchyma to a snorkel used to breathe underwater. During flooding, the roots get cut off from oxygen and other vital gases needed for survival. In response, the plant creates air pathways connecting the submerged regions of the plant to the parts above water. Similar to a snorkel, these pathways help the plant “breathe” by transporting gases to the submerged roots. Moreover, the air channels reduce the energy requirement for the breathing process and can help the plant conserve energy during extreme conditions of drought or nutrient deficit.

The researchers found that a phytohormone called “auxin” is required for the formation of aerenchyma during normal root growth, and identified two factors leading to the induction of aerenchyma formation in response to flooding. The phenomenon begins when the roots are submerged underwater in aerobic conditions. The restrictions to gas exchange cause ethylene to accumulate in the roots, which encourage the production of respiratory burst oxidase homolog (RBOH) – an enzyme responsible for reactive oxygen species (ROS) production. As it turns out, the released ROS triggers cell death in the tissues, forming cavities for the passage of gases.

The RBOH can also be activated by the presence of calcium (Ca2+) ions that are transported from the apoplast (water pathways). Certain plants have calcium-dependent protein kinases that use Ca2+ to add phosphates to the RBOH, stimulating it to produce ROS. This effect occurs at later stages as the plants gradually experience oxygen-deficient conditions after prolonged underwater submersion.

While aerenchyma is mostly associated with plants that have adapted to soils with high water content, it can also develop in upland plants under drought and nutrient deficiency. Low concentrations of nitrogen and phosphorous, essential nutrients required for plant growth, was found to increase the ethylene sensitivity, stimulating the formation of aerenchyma. Moreover, ethylene was also a common factor in triggering aerenchyma in maize, offering a way to improve the crop’s resilience. “The increase in ethylene sensitivity could be an effective strategy to stimulate aerenchyma formation in the absence of restricted gas diffusion,” speculates Dr. Yamauchi.

While the mechanism behind aerenchyma formation remains uncertain, suggesting the need for further research, the findings of this study open up the possibility of improving crop resilience and paving the way for better food security in the wake of climate change.

The above paper has been based on the following two papers:

“Fine control of aerenchyma and lateral root development through AUX/IAA- and ARF-dependent auxin signaling.” Proceedings of the National Academy of Sciences of the United States of America, 116, 2019, DOI: 10.1073/pnas.1907181116

This study was supported by the Japan Science and Technology Agency PRESTO grants JPMJPR17Q8 to T.Y. and Grant-in-Aid for Transformative Research Areas (A) (MEXT KAKENHI grant JP20H05912) to M.N.