Understanding the impact of satellite constellations on astronomy 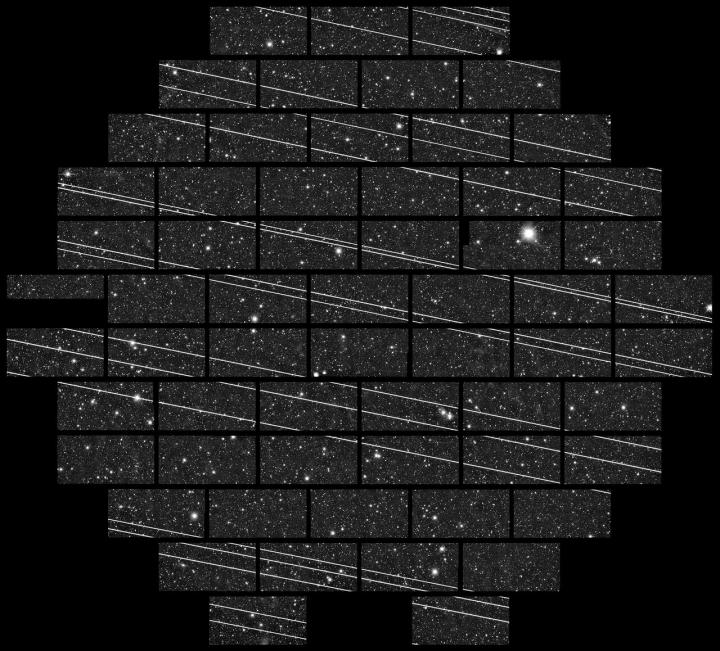 In June 2019, the International Astronomical Union expressed concern about the negative impact that the planned mega-constellations of communication satellites may have on astronomical observations and on the pristine appearance of the night sky when observed from a dark region. We here present a summary of the current understanding of the impact of these satellite constellations.

Following the statement of June 2019, IAU’s Commission B7 Protection of Existing and Potential Observatory Sites and the Executive Committee Working Group Dark and Quiet Sky Protection were asked by the IAU Executive Committee to assess the situation and to start discussions with the companies that are responsible for launching and operating the mega-constellations in order to study measures to mitigate their interference.

Commission B7 has requested the input of astronomers from different organisations (Vera C. Rubin Observatory, U. Michigan, CAHA, ESO and ESA) skilled in modeling the frequency, location and brightness of satellite mega-constellations. Some of those results are presented below. The results of the simulations, given the large number of parameters involved and the associated assumptions and uncertainties, are to be considered preliminary.

A summary of the findings and of the actions that have so far been undertaken is presented in a specific IAU Theme.

The focus of this Statement has been on the optical wavelengths. This is not to underplay the effect on the radio and submillimetre wavelength ranges, which is still under investigation. The IAU considers the consequences of satellite constellations worrisome. They will have a negative impact on the progress of ground-based astronomy, radio, optical and infrared, and will require diverting human and financial resources from basic research to studying and implementing mitigating measures.

A great deal of attention is also being given to the protection of the uncontaminated view of the night sky from dark places, which should be considered a non-renounceable world human heritage. This is one of the main messages communicated on the dedicated IAU-UNESCO web site on astronomical heritage.

In order to mitigate the impacts of satellite constellations that may interfere with professional and amateur astronomical observations, the IAU, in close collaboration with the American Astronomical Society (AAS), will continue to initiate discussions with space agencies and private companies that are planning to launch and operate currently planned and future satellite constellations.

The IAU notes that currently there are no internationally agreed rules or guidelines on the brightness of orbiting manmade objects. While until now this was not considered a priority topic, it is now becoming increasingly relevant. Therefore the IAU will regularly present its findings at the meetings of the UN Committee for Peaceful Uses of Outer Space (COPUOS), bringing the attention of the world Government representatives to the threats posed by any new space initiative on astronomy and science in general. In addition, the specific theme of the mega-satellites will be included in the Programme of the IAU/UNOOSA/IAC Conference Dark and Quiet Skies for Science and Society, which will be held in Santa Cruz de La Palma, Canary Islands, Spain, on 5-8 October 2020.

The IAU stresses that technological progress is only made possible by parallel advances in scientific knowledge. Satellites would neither operate nor properly communicate without essential contributions from astronomy and physics. It is in everybody’s interest to preserve and support the progress of fundamental science such as astronomy, celestial mechanics, orbital dynamics and relativity.

[1] Hainaut, Olivier (ESO), 2020, On the impact of satellite mega-constellations on astronomical observations, submitted for publication in Astronomy & Astrophysics.

Deep Aging Clocks: The emergence of AI-based biomarkers of aging and longevity

Scienmag Jul 3, 2019
The advent of deep biomarkers of aging, longevity and mortality presents a range of non-obvious applicationsCredit:…

A new model of the worm C. elegans to progress in the study of a rare…