UK researchers from the University of Bath and the ISIS Neutron and Muon Source have developed a method to directly measure the growth rate of ‘amyloid’ fibrils linked to Parkinson’s, Alzheimer’s and other diseases 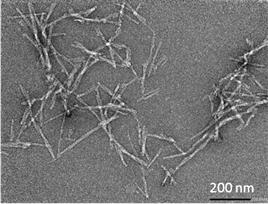 Amyloid fibrils are deposits of proteins in the body that join together to form microscopic fibres. Their formation has been linked to many serious human diseases including Alzheimer’s, Parkinson’s and Type 2 diabetes.

Until today, scientists have been unable to reliably measure the speed of fibril growth, as there have been no tools that could directly measure growth rate in solution. However, researchers from the UK’s University of Bath and the ISIS Neutron and Muon Source have now invented a technique that does just that. Results from their study are published in RSC Chemical Biology.

“This is an important breakthrough, as information on fibre growth is key to understanding the diseases associated with amyloid fibrils,” said Dr Adam Squires from the Department of Chemistry at Bath, and study co-author. “Knowing what makes these fibres grow faster or slower, or whether they break and what makes them break – in other words, understanding these fibres at a molecular level – could eventually have implications for researchers looking for treatments for these serious diseases.”

He added: “This new technique will also help scientists investigating non-medical roles of protein folding and self-assembly – for instance, in biological processes such as inheritance in yeast, or for research into new nanomaterials.”

WHY GROWTH RATE IS BEST MEASURED IN SOLUTION

Most experimental techniques for measuring fibril growth in solution only measure how fast proteins transform into fibril material overall, not how long each fibril is or how fast it is growing. Other techniques measure just one fibril attached to a surface such as glass or mica. These conditions do not reflect the real biological process, which occurs in solution.

Researchers for the new study used Small Angle Neutron Scattering (SANS) to study the growth rate and length of amyloid fibrils as they assembled in solution. By using the unique ways neutrons interact with hydrogen and its isotope deuterium, the researchers were able to use ‘contrast matching’ to make all of the fibrils invisible to neutrons apart from the growing tips. Using the SANS2D instrument at the ISIS neutron facility, they watched these tips become longer in real time. This gave a direct measurement of the growth rate, which had never been done before.

The results of growth rate from this study align with values estimated from other methods, indicating that SANS is a suitable tool for measuring amyloid fibril growth.

The technique also allowed the researchers to measure the number of fibril ends present in a given sample. This information told them how many separate fibres were growing, and the length of each one. The fragility of fibrils from different proteins, and how often they break into shorter fragments exposing more growing ends, is a key part of the puzzle to understand fibril disease propagation.

Lead researcher Dr Ben Eves carried out the experiments at Bath as part of his ISIS Facility Development studentship.

“I’m thrilled with the success of this method,” he said. “Developing this technique was a truly amazing experience. Understanding the growth of amyloid fibrils is fundamental to understanding their pathogenic, biological and technological properties.”

He added: “In future, I believe this technique could be used to investigate the effect of different factors that affect the growth rate of amyloid fibrils, as well as to measure the impact of therapeutic molecules (the building blocks of medicines) designed to slow down or prevent the growth of amyloid fibrils.”