The transgenic papaya “SunUp” was developed in the 1990s and was widely publicized because of its ability to resist the papaya ringspot virus. Although researchers from the Ming group had identified the genomic sequence of SunUp by 2008, it was unclear where the transgenic insertions were and what effect they had. A new study has now identified these changes and how they influence the transgenic plants. 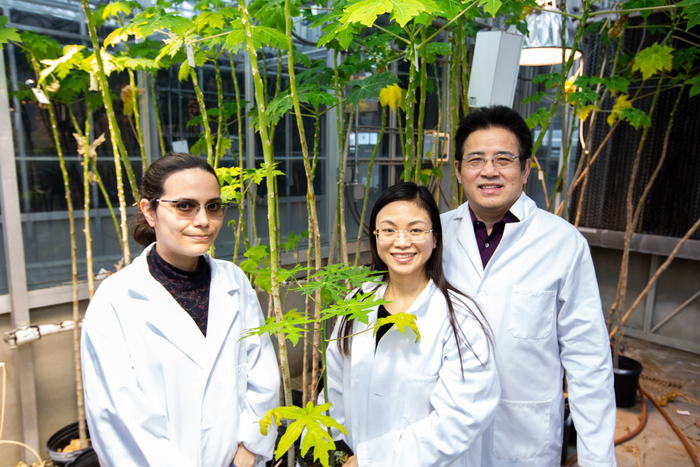 The transgenic papaya “SunUp” was developed in the 1990s and was widely publicized because of its ability to resist the papaya ringspot virus. Although researchers from the Ming group had identified the genomic sequence of SunUp by 2008, it was unclear where the transgenic insertions were and what effect they had. A new study has now identified these changes and how they influence the transgenic plants.

Papaya fruits are a rich source of potassium, magnesium, and vitamins A and C, propelling a steady increase in their global production. Papaya originated and was domesticated in southern Mexico and Central America, and is now cultivated in tropical and subtropical regions worldwide. Wild papaya has small seedy fruits with very little edible flesh, while the domesticated version can weigh more than five pounds. However, there was one major problem: Papaya was susceptible to the papaya ringspot virus, resulting in stunted plants that do not produce mature fruit, and there is no resistance in the papaya genetic code.

To counter this problem, researchers developed the transgenic papaya SunUp, by using a technique called particle bombardment-mediated transformation. Gold particles were covered with the coat protein gene of the virus and shot into the cells of the non-transgenic papaya “Sunset” using a gene gun. SunUp therefore contained gene sequences of the virus, and was protected from infection via RNA-mediated gene silencing.

“It took us 8 years to read each DNA nucleotide in the insertions and rearrangements, and we repeated the sequencing using different technologies to understand the nature of these transgenic insertions,” said Ray Ming (GEGC), a professor of plant biology. “The insertion was so complex that although we sequenced the genome in 2008, we didn’t know where the transgenic sequences were located.”

In earlier studies, the researchers used Sanger DNA sequencing technology that read short stretches of DNA, 500 to 600 bases, making it difficult to accurately place the transgenic sequences in the draft genome. In the current study, they used sequencing technologies from Pacific Biosciences and Oxford Nanopore technologies to read very long stretches of DNA. “These are the latest techniques available and they enabled us to read over 50 to 200 thousand base pairs at a time,” Ming said.

The group discovered that SunUp had an insertion of 1.6 million base pairs, which consisted of DNA fragments not only from the gene gun, but also nuclear DNA sequences originating from chloroplasts and mitochondria. “There were 74 fragments in the insertion: 42 were nuclear chloroplast fragments, 13 were nuclear mitochondrial fragments, 10 were from the chloroplast genome, and 3 were from mitochondrial genome,” Ming said. “The particle bombardment broke the double-stranded DNA and inserted all 74 fragments in one location in chromosome 5 of the genome.”

Surprisingly, even though there is such a large insertion, the transgenic manipulation did not cause any change in gene expression. “We looked at every gene sequence and there is no impact on the genome function. When we compared SunUp and Sunset, they only have 20 genes that are differentially expressed, which are due to transposon-mediated rearrangements and not from the genetic manipulation done by particle bombardment-mediated transformation,” Ming said. Transposon-mediated rearrangements occur naturally and lead to gradual changes over time, which is expected since SunUp and Sunset have been growing and diverging for 30 years.

The researchers are going to look at other papaya transgenic lines to see if they have similar rearrangements. “We expected many more insertion sites and rearrangements and we were surprised that there were only two. In addition to the 1.6 Mb insertion caused by the 74 fragments, there was a 591 Kb deletion in chromosome 5 that was moved into the 1.6 Mb insertion. We still don’t understand why there were nuclear mitochondrial and chloroplast fragments flanking the three transgenic fragments and why they were all inserted in the same location. We will examine other transgenic lines to see if there is any underlining mechanism in common,” Ming said.

“Since transgenic papaya has such a strong resistance to papaya ringspot virus and thus saved the Hawaiian papaya industry, it was the poster child for transgenic crops. Transgenic papaya was approved by several countries that rejected other such crops,” Ming said. “This work will strengthen the message that even after three decades, we can still consume transgenic papaya safely and there is no negative effect on the papaya genome or the consumers.”

The study “SunUp and Sunset genomes revealed the impact of particle bombardment and domestication history in papaya” was published in Nature Genetics and can be found at https://www.nature.com/articles/s41588-022-01068-1.