Understanding the emergence of leukemia 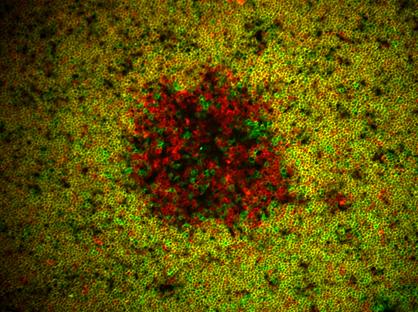 Acute T-cell lymphoblastic leukemia is a rare type of blood cancer that affects mostly children. This blood cancer appears from the precursor cells that produce T lymphocytes (a type of white blood cells). A new study from Instituto Gulbenkian de Ciencia (IGC), conducted in mice, shows that leukemia can emerge as a consequence of prolonging the presence of precursor cells in the thymus. This work was now published in the scientific journal The Journal of Immunology.

T lymphocytes are essential to fight infections and prevent cancer. They develop in the thymus, an organ located above the heart. Their development relies on the seeding by
precursor cells that come from the bone marrow and enter the thymus to differentiate and learn to protect the organism. This is a process secured by an “assembly line” in the thymus in which many of the precursor cells enter, but are discarded if they malfunction. The work led by Vera Martins at the IGC shows that if there is a problem with the precursor cells that come from the bone marrow, the thymus alone can maintain its “assembly line” for some time. However, this function is associated with a high risk of developing T-cell acute lymphoblastic leukemia.

The IGC team tested several genetic factors in mice known to be involved in the formation of T lymphocytes. The results showed that in all conditions tested there was an incidence of ca. 80% of this type of leukemia. “Our study shows the importance of investigating in detail the cellular, genetic and physiological mechanisms associated with the process of normal cell differentiation, and opens the door to understand how leukemia can appear in cells that should be learning to defend our body,” says Vera Martins.

This work was supported by Instituto Gulbenkian de Ciencia and by Fundacao para a Ciencia e a Tecnologia.

Tropical soil disturbance could be hidden source of CO2

The secrets of secretion: isolating eucalyptus genes for oils, biofuel