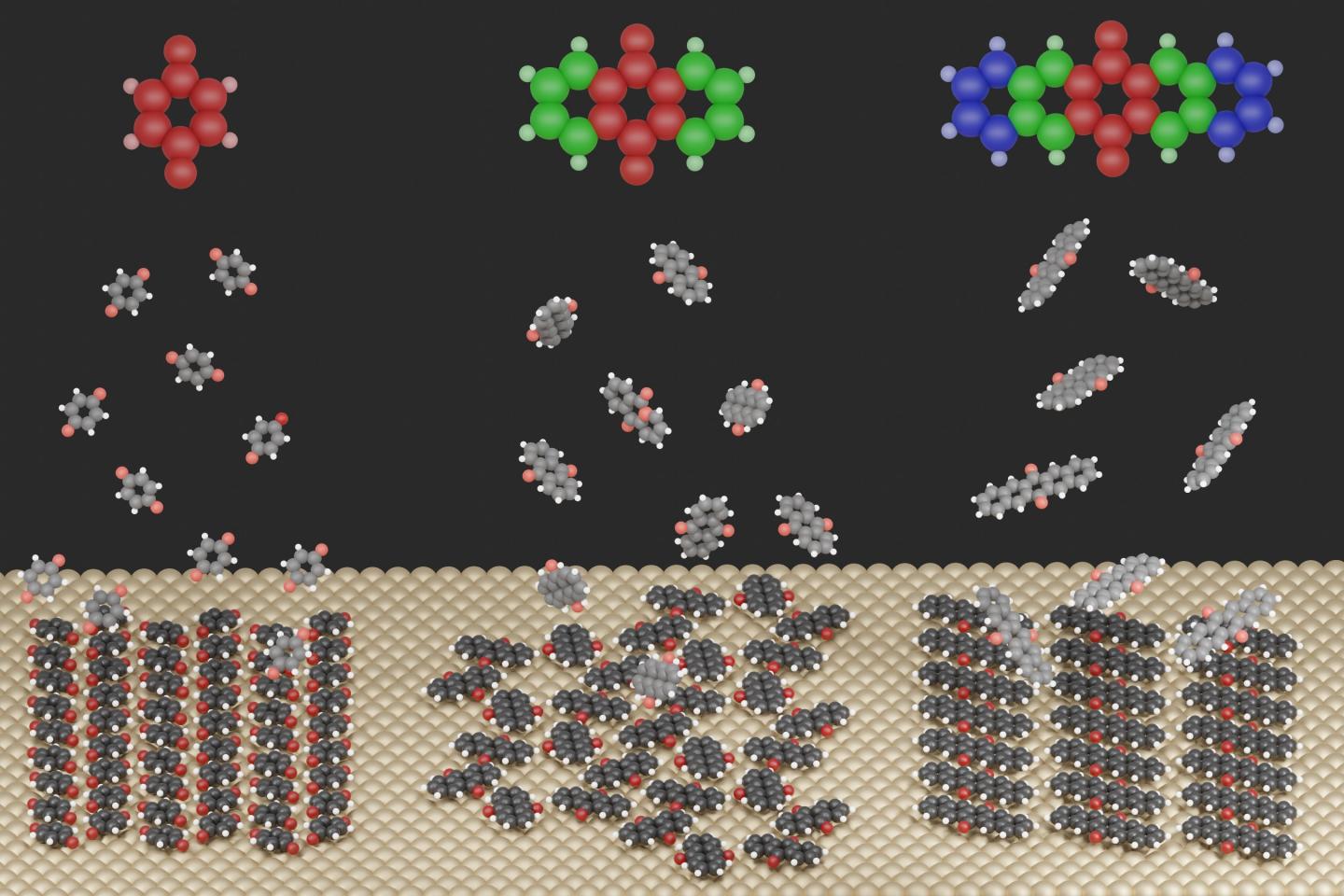 The production of nanomaterials involves self-assembly processes of functionalized (organic) molecules on inorganic surfaces. This combination of organic and inorganic components is essential for applications in organic electronics and other areas of nanotechnology.

Until now, certain desired surface properties were often achieved on a trial-and-error basis. Molecules were chemically modified until the best result for the desired surface property was found. However, the processes controlling the self-assembly of molecules at interfaces are so complex that small molecular changes can lead to completely different motifs. Physicists from TU Graz explain this unexpected structure formation in a study published in the renowned journal ACS Nano. For this purpose, the researchers studied quinoid compounds on a silver surface. First author Andreas Jeindl from the Institute of Solid State Physics explains: “Naively, one might expect molecules with slightly different sizes but the same functionalization to form similar motifs. In striking contrast, our joint theoretical and experimental study shows that quinones can form diverse structures. Despite constant initial conditions, the formation of these structures cannot be predicted and planned without detailed knowledge of the relevant interactions.”

The researchers in Graz, together with a team from the FSU Jena, have now started to break down this unpredictability. They found that the structure formation is the result of a trade-off between three opposing driving forces: The interaction between molecules and the metal attempts to force all molecules into the same orientation, while the interaction between molecules sometimes favours different orientations. The geometric shapes of the molecules then act as a third factor, preventing or only partially permitting certain interactions.

Based on this, they were able to establish a design principle with which the structures that form at the interfaces, and subsequently their properties, can be predicted – at least for a first class of molecules. An essential role is played by a search algorithm (SAMPLE) based on machine learning. Jeindl elaborates: “We were able to show in this publication that the structures predicted by our algorithm are in excellent agreement with experimental characterizations of organic-inorganic interfaces – both in how the molecules orient themselves on the surface and in how the motifs repeat on the surface. Moreover, our analysis, for the first time, allowed a detailed and quantitative break down of the driving forces, not only of the experimentally formed structures, but de facto of all conceivable structures. This is an important look behind-the-scenes of structure formation.”

The non-intuitive interplay of similarly important interaction mechanisms remains a challenge for the design of functional interfaces. With a detailed investigation of all the driving forces, however, the physicists at TU Graz are nevertheless able to devise a design principle for the self-assembly of functionalized molecules for a given class of molecules. Once there are enough analyses for different classes of molecules, the right molecules for the desired interfacial properties can be easily assembled on the computer from modular building blocks.

The publication is a core part of the dissertation of first author Andreas Jeindl. The experimental part of the work was performed by FSU Jena. Funding for the work behind this publication was provided by dissertation supervisor Oliver Hofmann’s Austrian Science Fund START project “MAP-DESIGN”.

This work is anchored in the Field of Expertise “Advanced Materials Science” (http://www.tugraz.at/go/advanced-materials-science), one of the five strategic focus areas of TU Graz.